Climate scientists said to expect surprises. How can we have a bigger drought than ever before with our rainfall increasing? It’s all about evaporation and it’s not lake evaporation. It is evaporation from plants that use more water in what is now a much warmer world in Central Texas. It is about that warmer world creating a longer growing season that also sees plants using more water, and it is about it being so warm already that some plants are not going dormant in the cold season and using water right through the winter. 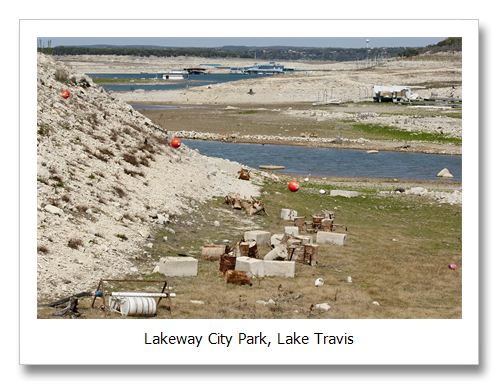 But aren’t the near record low lake levels caused by the vastly increasing population of Central Texas? If it were only so simple.

During the drought of the 1950s, the Lower Colorado River Authority (the one in Texas) released almost as much water for hydroelectric generation as we use today for a all municipal, industrial and agricultural uses combined. In the 1970s the LCRA began building coal and gas fired power plants and when these plants came on line, LCRA stopped generating electricity with their hydroelectric generators solely to generate electricity. All electricity generation beginning in the early 1980s has been done in combination with water releases for municipal, industrial or irrigation uses.

This means that today, even though our population is somewhere near 10 times what it was in the 1950s, because the LCRA was releasing such a huge amount of water generating electricity back then, our total water use—total water releases by the LCRA—are no more today than in the 1950s.

This means that a little bit of climate pollution created warming so far is creating a vast amount of evaporation that is reducing lakes levels to near record lows. When a valid normalization is done (this is a big job—looking at the water balance from a scientific perspective) it will likely be shown that today’s drought is far worse than Central Texas’ drought of record in the 1950s.

The following link is to a PowerPoint presentation that the Initiative created for a presentation at the Alamo Sierra Club in San Antone on the 15th. It lays out a lot of the statistics and more for some of the above discussion.  (Link)