Think that our growing population is enduring increasing impacts from severe weather and you would be correct. But adjusting extreme weather events for what the scientists call “population bias” is nothing new. What is new is the amount of press that the “voices” get for their arguments that it is all related to a growing population.  Climate scientists have been telling us for a long time that it’s related to climate change and that they have adjusted the numbers for population bias, and growth trend bias and property value and property location bias and several other biases depending on the type of weather severity. Two examples:

The first comes from lessons learned from hurricane Katrina.  Climate scientists do something called “normalization” to compare apples to apples when dealing with climate comparisons and it accounts for all of the different things (biases) that may change the actual impacts of a given piece of severe weather. This normalization not only changes damage costs into dollars that take inflation into consideration, but it changes the population of impacted areas to represent that of the past at some point. It changes the patterns of life that our civilization adopts over time, like for hurricane damage evaluations, it accounts for  increases in the number of vacation homes in coastal areas to represent today’s more affluent lifestyle vs. that of the past. (See August 8, 2011) 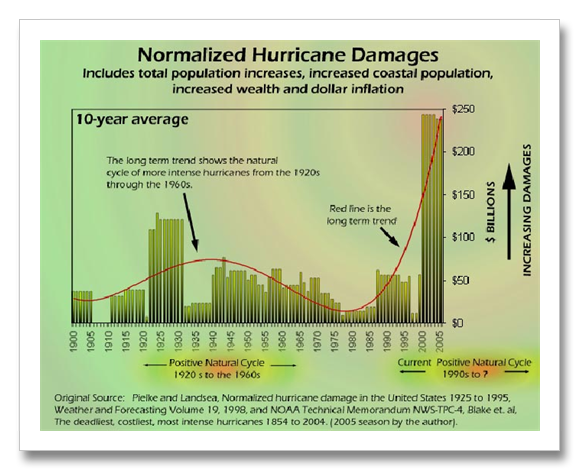 The other example is tornadoes. We normalize tornado damage based on clever thinking involving the science around lives saved from innovations like early warming systems, Doppler radar, severe weather preparedness training, increases in telecommunications capabilities, tornado alerts, tornado sirens, and better building codes. All of these things have been related separately to lives saved in tornadoes. These things must be counterbalanced with increased observations of tornadoes from an increased population, tornado observation networks, Doppler radar, you get the picture. When current tornado outbreaks are then normalized as is described in the link to the rest of the story at the end of this paragraph, we find that not only are the numbers of tornadoes significantly increased, but the damages and deaths are too–even though actual deaths are only approximately equal to (or less than) the biggest tornado outbreaks in history. (See April 29, 2011)

Looking at all extreme weather outbreaks since 1980 it’s obvious to see the trend, even if the trend is only adjusted for inflation. The reason the trend is easy to see is that in the last decade (plus or minus) our population has not increased near enough to have this kind of effect. We are now up to a preliminary figure of $55 billion in total damages for 2011 with 14 events reaching the $1 billion threshold. The big spike in the NOAA Billion Dollar weather Disaster graphic in 2005 was Katrina of course. This one storm was not so much a climate related disaster as an engineering failure of spectacular proportions. It was an anomaly and should somewhat be disregarded when evaluating this sort of data. (It’s the other four record Cat 5 hurricanes in 2005 that tell that story.) The trend is shown in the increasing number of $1 billion or more weather events shown by the blue bars. 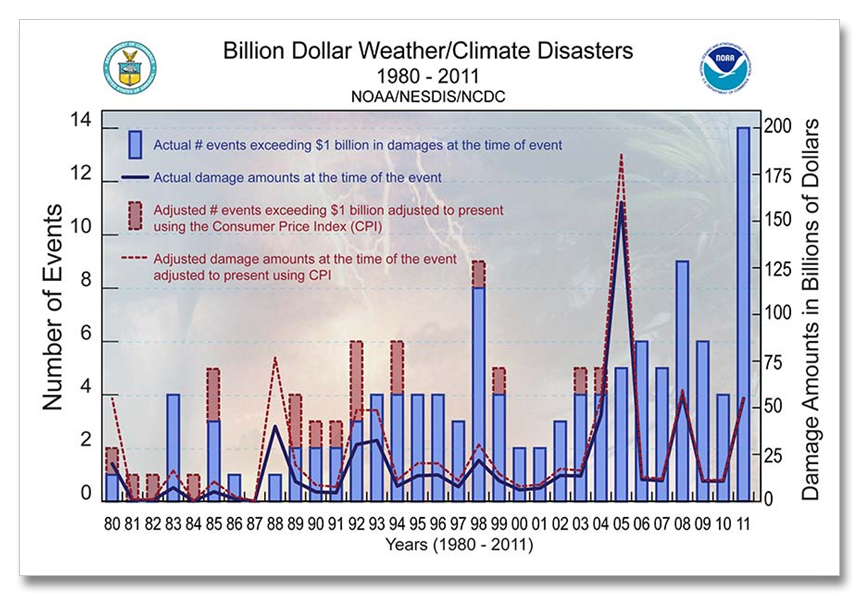