Climate Quake – Think There is No Way that Climate Change Could Cause Earthquakes?

Think Again! I have been reading articles about the impacts of warming on solid earth for years now. It is only logical to think that warming would have an impact on solid earth.  Everything expands as it warms. Earth is no exception.  This expansion would be realized, likely, at fault zones. These pre-cracked areas of our planet would more easily be able to move as the Earth expanded with warmer temperatures.  That movement of course is an earthquake. 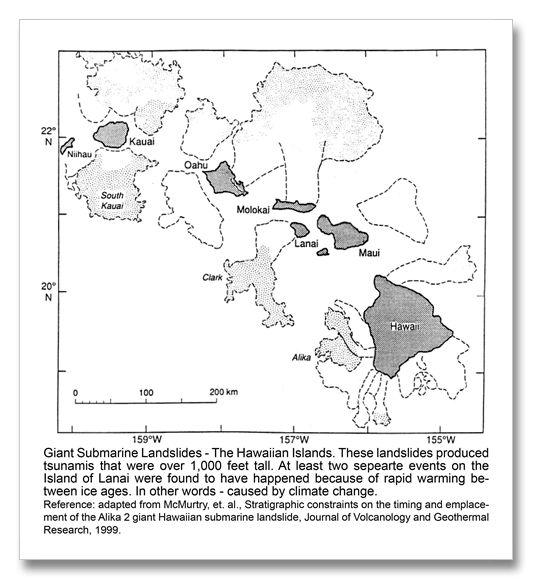 Everyone knows what happens to an asphalt or concrete road on a really hot summer day. It buckles. The buckling is caused by heat expansion. The same thing happens to the earth’s crust. Limestone expands 16 inches per degree Fahrenheit warming per mile, or over 130 feet per 100 miles (about the same as concrete or steel. Granite expands only about half as much as limestone.  The circumference of Earth is 24,900 miles, so for every degree of warming, the skin of the earth expands 56 miles.

These papers I have been coming across from time to time have now started to become more frequent in their appearances.  What they are saying is not comforting.  It turns out that although getting the data to associate a warming planet with earthquakes and such is extremely difficult, once the data is acquired, the association just sort of falls out into a big smelly pile of anxiety about the future we are creating for this planet.

Not only are earthquakes associated with climate change, but so are tsunamis of course and volcanic eruptions, terrestrial and submarine landslides, methane outbursts from methane frozen on the ocean floor, ice avalanches from glacial collapse, and etc. The real surprise though is the size of some of these events.

I mentioned that collecting the data was the hard part.  Much of the data comes from the ocean floor, which we supposedly know less about than the moon. There is long-studied evidence on the ocean floor of what are called GSLs or Giant Submarine Landslides. The scars from these giant landslides can run for hundreds of miles and involve blocks of earth that tumble in-whole that are a mile across. Some of the debris fields in Hawaii from these mega submarine landslides are bigger than the big island of Hawaii itself.

What happens then, when a mega submarine landslide happens?  A mega tsunami, or course. And this is the scary part, especially today considering the tsunami in Sendai, Japan. When a mega tsunami happens, sometimes it leaves evidence  for hundreds of thousands of years. This is just what scientists are beginning to find in various parts of the world – once they know what they should be looking for.

On Lanai, (one of the Hawaiian Islands) has a scar where topsoil was stripped from the side of the island, in a way that a landslide would not have behaved, that reaches 1,200 vertical feet up the side often mountain. The caused is believed to be a giant landslide on the flank of the Moana Loa volcano. This unbelievable event was 40 times taller than the Sendai tsunami. There is one that is 800 feet high on Kahoolawe.

The marine geologist studying these events used their computer models to simulate this giant slide and tsunami and found a really good agreement between the tsunami and the landslide.  They have also modeled some of the bigger landslides, no sorry, this 1,200 foot tsunami was not one of the really big ones, I am sorry to say. For the really big GSLs they get tsunamis over 2,600 feet tall – yes, half a mile high.  This half mile tall wave is only associated with a five kilometer long stretch of Hawaii at Ho’okena beach.

So these things existed in the prehistoric past.  How often did they go off?  The answer is likely – way to regularly.  The two events evaluated in this paper by McMurtry at the school of Ocean and Earth Science and Technology at the University of Hawaii, took 100,000 years to happen. But dozens of scars are evident around the Hawaiian Islands.

It is this ocean volcanoes type of island that causes all of the trouble.. Islands like those found in Japan, or the Aleutian islands, of Iceland, or New Zealand, or the Canary Islands in the mid Atlantic. They are really everywhere, and everywhere they are , there have been giant landslides and mega tsunamis.

So like Mark Twain says, “What gets us into trouble is not what we don’t know. It’s what we know for sure that just ain’t so”. The two events evaluated in this study happened during the last two interglacial warm periods between ice ages.  They date to about 120,000 years ago and 240,000 years ago. They happened as Earth was warming dramatically out of the ice ages into interglacial warmth – just like what has been going on in the last 10,000 years.

So, next time someone says that GW and increased seismic activity is a crock, Tell them about McMurtry at the University of Hawaii.

The rest of the story?  Check out the Royal Philosophical Society (the United Kingdom’s National Academy of Sciences.) They released a special edition of their journal The Philosophical Transactions of the Royal Society, last May. I believe there were fifteen different articles on the impacts of a warming climate on solid earth.