Coral Bleaching Could be the Worst Ever in 2010

The Australian Research Council (ARC) said in press release that reefs are dead or dying across the Indian Ocean and into the Coral Triangle because of extra warm surface waters from the Seychelles in the west to Sulawesi and the Philippines in the east including reefs in Sri Lanka, Burma, Thailand, Malaysia, Singapore, and many sites in western and eastern Indonesia." 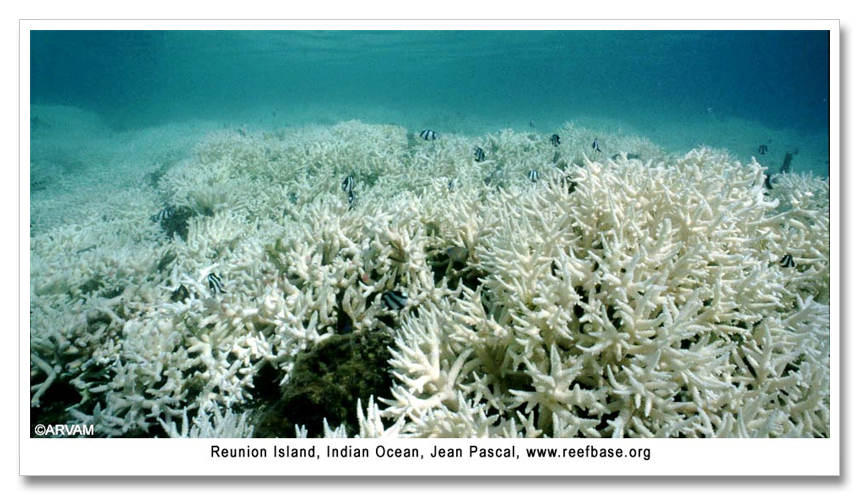 “It is certainly the worst coral die-off we have seen since 1998.  It may prove to be the worst such event known to science … Coral cover in the region could … drop from an average of 50% to around 10%, and it will take years to recover" says Dr Andrew Baird of the ARC.

The ARC Press Release continues: Marine ecologists from the Wildlife Conservation Society, CoECRS and Syiah Kuala University rate this event as one of the worst coral diebacks ever recorded. `My colleagues and I have high confidence these successive ocean warming episodes, which exceed the normal tolerance range of warm-water corals, are driven by human-induced global warming.

They underline that the planet is already taking heavy hits from climate change – and will continue to do so unless we can reduce carbon emissions very quickly. `They also show this is not just about warmer temperatures: it is also threatening the livelihoods of tens of millions of people and potentially the stability of our region.’ 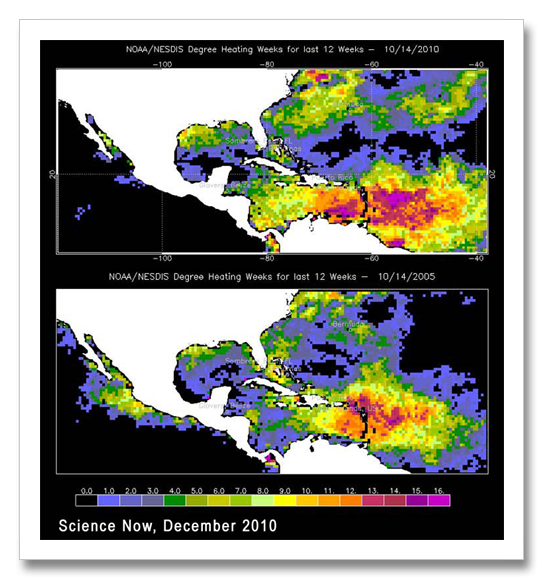 NOAA says that the 12-month period ending June 2010 was the warmest 12-month period in the thermometer record. Last winter was the second warmest winter ever recorded globally and 2010 will probably tie 2005 as the hottest year ever (link). The World Meteorological Organization says that 2010 will be in the top three warmest, possibly the warmest, and that the ten-year period 2001 to 2010 is the hottest ten-year period of the instrument record. (link). The National Martine Fisheries Service is currently considering the listing of 82 species of coral in U.S. waters as endangered because of continued die-off and the threat of extinction from warming. 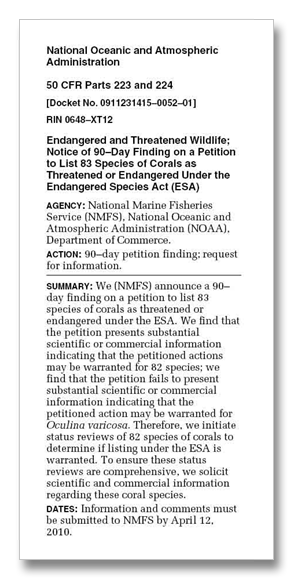 The extreme heating in the Caribbean Sea shows up well in the NASA image of heating degree weeks.  The warmer colors combine temperature and time to evaluate the amount of long-term stress on coral reefs.  The comparison is made to 2005 because this year in the Caribbean was even warmer than the Super el Nino year of 1998.

"Profound ecological changes are occurring on coral reefs throughout the tropics" says a team of 32 scientists who have released a report that summarized 48 research project covering 318 reefs and 273 reef fish species during the period 1955-2007 across the Caribbean Sea. The scientists say the half of the fish species groups studied are decreasing at 2.6 to 6% loss per year.  This loss rate is equal to 22 to 43 percent over 10 years. The decline started about 1995.Because the species groups span game and commercial fish species as well as non commercial and non game fish species, over fishing is not the problem. 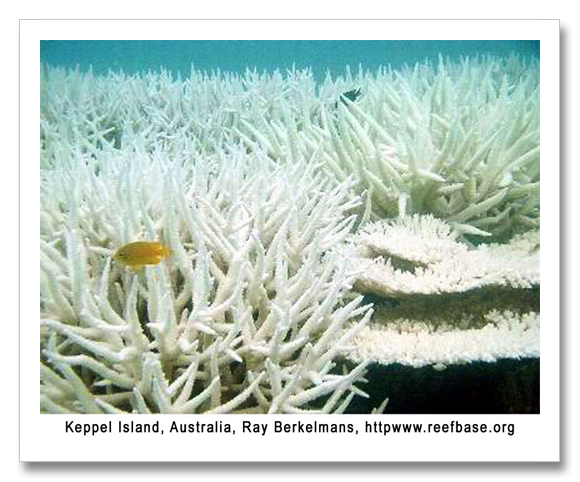 What is happening is a result of coral reef decline due to climate change, put more succinctly, "…drastic recent degradation of reef habitats… indicate that Caribbean fishes have begun to respond negatively to habitat degradation." Corals cover has been reduced "drastically" across the Caribbean region since the mid-1970s. The reduction is estimated to be 80% (Gardener 2003).

The reason that the team believe that the fish decline did not coincide with the reef decline is that coral skeletons persist for decades. It is the structure of the reef that provides much of the benefits of the reef habitat. After several decades, this  structure starts to disintegrate an so goes the fish population.

The February 10 Federal Register published a petition for this extensive listing citing the number one reason as warming oceans due to climate change. The petition states that all of the petitioned species have suffered losses of 30% or more over a 30-year period placing them at high risk of extinction according to the  IUCN guidelines (International Union for the Conservation of Nature).  The petition continues "…the region suffered massive losses of corals in response to climate-related events of 2005, including a record-breaking series of 26 tropical storms and elevated ocean water temperatures". The petition goes on "…the U.S. Virgin Islands lost 51.5 percent of live coral cover, and that Florida, Puerto Rico, the Cayman Islands, St. Maarten, Saba, St. Eustatius, Guadeloupe, Martinique, St. Barthelemy, Barbados, Jamaica, and Cuba suffered bleaching of over 50 percent of coral colonies, citing Carpenter et al. (2008). The petitioner cites Gardner et al. (2003) in asserting that, over the three decades prior to the 2005 events, Caribbean reefs had already suffered an 80 percent decline in hard coral cover, from an average of 50 percent to an average of 10 percent throughout the region."

The most alarming statement in the petition follows: "… these corals face significant threats. To support this assertion, the petitioner cites Alvarez-Filip et al. (2009) in noting the dramatic decline of the three dimensional complexity of Caribbean reefs over the past 40 years, resulting in a phase shift from a coral-dominated ecosystem to fleshy macroalgal overgrowth in reef systems across the Caribbean."  This "fleshy macroalgal overgrowth" – what this means is that most of the corals have died and have been replaced by a green or brown slime of algae.