The West Antarctic Ice Sheet (WAIS) is the only “marine ice sheet” remaining on Earth. A “marine” ice sheet is one that whose base rests on rock below sea level. These peculiar ice sheets were numerous during ice ages but they disappeared in the warm periods between ice ages like we are experiencing today. They tend to extend out into open ocean with water beneath the ice. What is important about the WAIS is that, because it’s base rests on rock below sea level, it is partially buoyed up by the the ice sheet trying to float in water.

The ice below the ocean surface is buoyant and wants to float. Where the ocean is deeper than several thousand feet, it does float. this characteristic makes these marine ice sheets unstable and this is why the WAIS is the only one remaining. As the Great Southern Ocean continues to warm, this instability will continue to increase resulting in this marine ice sheet collapsing as have all the others—as has this one, repeatedly in the past.

The last collapse happened about 100,000 years ago. Records show it took a thousand years, but the records that this timeline is based on have a minimum resolution of about a thousand years. Any time period less than this we just cannot see.

What we can see though is a rapid sea level jump of 10 feet in 100 years that happened on a coral reef on the Yucatan Peninsula about this time. The time resolution of this study is limited as well with the lowest resolution being about 100 years.

What this study does (McGregor 2012) is put together the longest record of satellite images yet of several critical areas around the WAIS. The critical nature of these areas is that they buttress large masses of ice inland. This buttressing holds back the inland ice and now these buttresses seem to be breaking apart.

ABSTRACT. The major outlet glaciers that drain the eastern sector of the Amundsen Sea Embayment
(Smith, Haynes, Thwaites and Pine Island) are among the largest, fastest-flowing and fastest-thinning
glaciers in West Antarctica. Their recent ice-flow acceleration is linked to ocean-induced ice-shelf
thinning, but may also arise from additional losses of ice-shelf buttressing that are not well understood.
Here we present a comprehensive history of coastal change in the eastern Amundsen Sea Embayment
between 1972 and 2011 derived mostly from Landsat imagery. The termini of all four major outlet
glaciers have retreated, but retreat is most rapid along the ice-shelf margins, where progressive rifting
has occurred. This pattern of retreat coincides with the recent acceleration of grounded ice and
contributed to loss of ice-shelf buttressing. The observed pattern of margin-led gradual ice-shelf
disintegration appears to be common in accelerating ocean-terminating outlet glaciers. We hypothesize
that this pattern is part of a positive feedback between glacier acceleration and rift growth that could
drive further buttressing loss in the eastern Amundsen Sea Embayment. 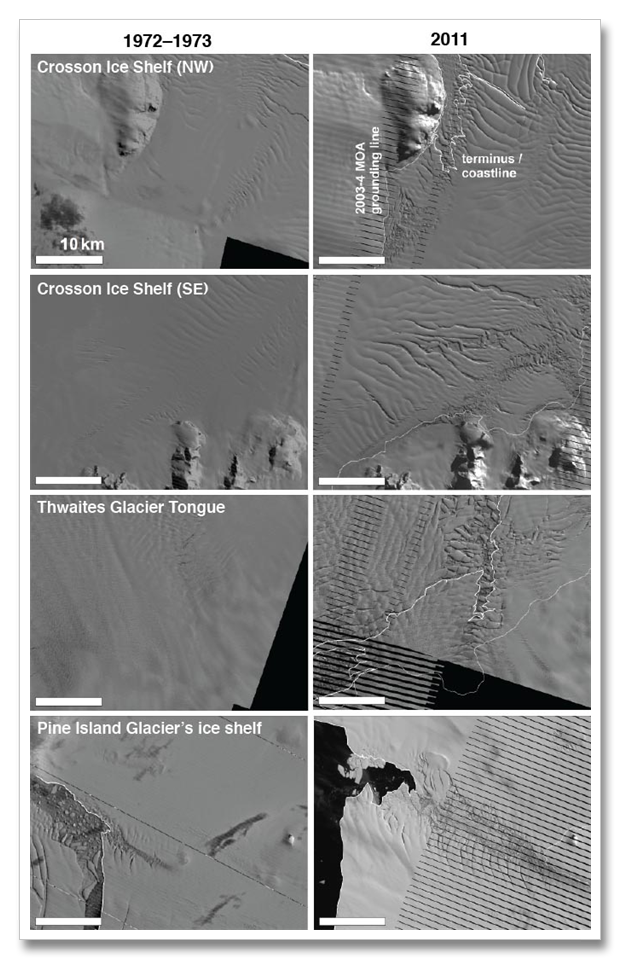 MacGregor et al., Widespread rifting and retreat of ice-shelf margins in the eastern Amundsen sea Embayment between 1972 and 2011, Journal of Glaciology, No. 209, 2012. (Press Release)
http://www.jsg.utexas.edu/news/2012/03/west-antarctic-ice-shelves-are-tearing-apart-at-the-seams/