The big deal here is that the PETM (Pleistocene Eocene Thermal Maximum) was a massive ocean extinction event. There was a minor extinction event on land, but the big deal happened in the world’s oceans. The global temperature change was only about five degrees and it was short lived (20,000 years.) 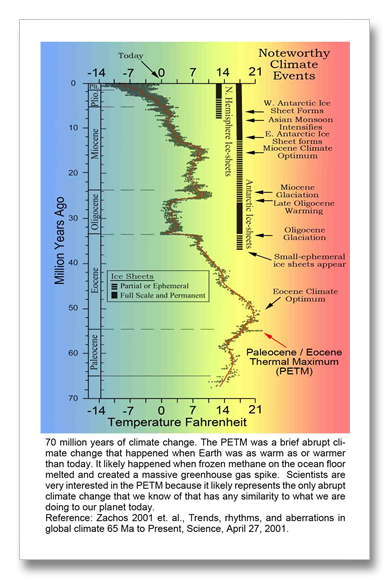 What likely happened was, as the world warmed to the Eocene Climate Optimum, frozen methane clathrates on the ocean floor destabilized. Massive amounts of methane thawed, much of it dissolving into the ocean and creating highly acidic conditions.  This caused the great ocean extinction event. some of it made it into the atmosphere causing the warming and associated land extinction.

This theory is known as the Clathrate Gun Theory. Methane is a peculiar substance, it warms the atmosphere about 35 times more than carbon dioxide. The numbers have changed recently, because of warming already encountered, methane has the capacity warm more. It used to be that methane only had the capacity to warm 25 times more than carbon dioxide. Part of this theory, that goes along with many other extinction theories, is that the clathrate gun has played a big role in extinctions many times in the past.

How all of that methane gets there involves what is called marine snow. The oceans are full of life, most of which is in the form of very small or microscopic algae and plankton. As these life forms die, their bodies float to the ocean floor, often clumping together during the long fall and creating what looks like snow in the ocean abyss. This "snow", made up of organic material then decomposes. Sa it decomposes it releases methane. Because the pressure is so great on the ocean floor, the methane combines with water and can actually freeze at temperatures above the freezing point of water.

This frozen methane collects in the decomposing sediments until the pressure rises because of falling sea level, or the ocean temperature rises. The frozen methane is already in a delicate, fairly unstable state, so it is relatively easy to melt, relatively being the operative term.  This "easy" melt has not happened in a long long time, since the PETM, 55.9 million years ago

This paper from Penn State, University of Bristol, University of Southampton, University of Cincinatti and Princeton finds that the rate of carbon dioxide emissions during the PETM was only about as much as the U.S. or China emits every year yet, it created a massive ocean extinction event. In other words, mankind is emitting greenhouse gases ten times faster, today than during the PETM extinction event when about half of all species in our oceans went extinct. So the "gun" is much more likely to "go off" in our global warming future than in a long, long time.