A decrease in Polar sea ice and the extreme winter events of the northeastern U.S. and Europe in 2005 have been recreated in modeling. It appears that warmer temperatures in the Arctic have an impact thousands of miles away as the jet stream makes a huge bend south. The results are snowpocali, or snowpocalypses. Only the winter of 2005 has been modeled so far, but the same conditions have been repeated nearly every year since, and the continued stormy winters in the Northeast and Europe attest to the trend. 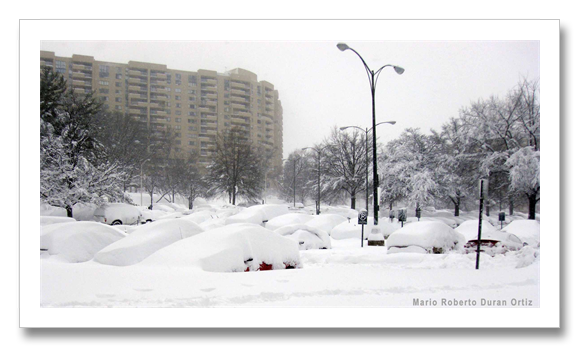 The models also show that this change in global weather patterns in these two areas tends to disappear as sea ice melt becomes more complete. It seems that the effect is strongest when sea ice is only partially melted. As warming needed to nearly or completely melt sea ice increases, the jet stream tends to lose its buckle and the extreme winter storminess does not eject as far south as it did when the jet stream was really bending south.

Paper Abstract: The recent overall Northern Hemisphere warming was accompanied by several severe northern continental winters, as for example, extremely cold winter 2005–2006 in Europe and northern Asia. Here we show that anomalous decrease of wintertime sea ice concentration in the Barents-Kara (B-K) seas could bring about extreme cold events like winter 2005–2006. Our simulations with the ECHAM5 general circulation model demonstrate that lower-troposphere heating over the B-K seas in the Eastern Arctic caused by the sea ice reduction may result in strong anticyclonic anomaly over the Polar Ocean and anomalous easterly advection over northern continents. This causes a continental-scale winter cooling reaching −1.5°C, with more than 3 times increased probability of cold winter extremes over large areas including Europe. Our results imply that several recent severe winters do not conflict the global warming picture but rather supplement it, being in qualitative agreement with the simulated large-scale atmospheric circulation realignment. Furthermore, our results suggest that high-latitude atmospheric circulation response to the B-K sea ice decrease is highly nonlinear and characterized by transition from anomalous cyclonic circulation to anticyclonic one and then back again to cyclonic type of circulation as the B-K sea ice concentration gradually reduces from 100% to ice free conditions. We present a conceptual model that may explain the nonlinear local atmospheric response in the B-K seas region by counter play between convection over the surface heat source and baroclinic effect due to modified temperature gradients in the vicinity of the heating area.