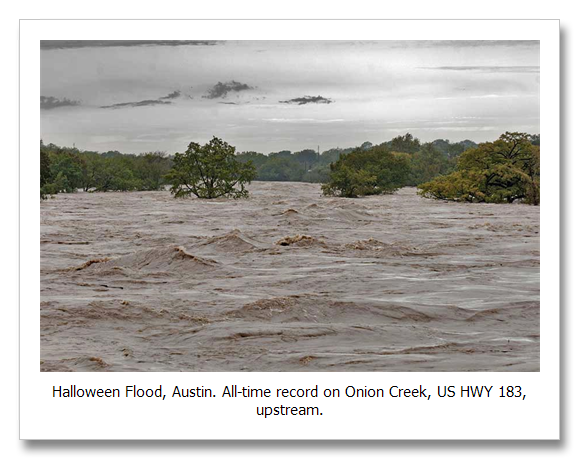 Already, with just a single degree Fahrenheit of warming, the most extreme rain events have increased 40 percent across the Central U.S. including Texas. It’s not just our imaginations; it’s not natural cycles. Interestingly, some of it may be caused, or enhanced by, agricultural practices.

Groisman et al. emphasizes that their work did not evaluate the impacts of changing agricultural practices on changing extreme rainfall events, but they did make some valid and striking observations:

“In the past several decades there have been major changes in agricultural management practices in the central United States. Among these are a near quadrupling of plant density for maize, adoption of soybean as a major crop essentially producing a biculture (corn and soybean) managed ecosystem, and earlier planting dates as a result of advances in mechanization and plant breeding. Intensification of agriculture and changing crop patterns over large areas of the central United States (including the upper Great Plains) consumes (and transpires back into the atmosphere) a significant amount of additional water requiring tapping groundwater storage and intercepting and diverting runoff. Therefore, changing crop patterns and water use over large areas may feed back to the water cycle through changes in transpiration and evaporation from additional open water surfaces, thus supplying the atmosphere with additional water vapor. These feedbacks became stronger in the last decades compared to the 1948–78 period when dams were under construction and many agriculture intensification measures were still in the planning stage.”

Corn and soybean yield more than doubled in three major states (Iowa, Illinois, and Indiana; tripled for Iowa soybeans). Wheat yield in the central U.S. increased; 50% in Kansas, Missouri, and Oklahoma with the same cropped area. A 15% increase in wheat yield was observed in Illinois from 25% less land than before WWII.

Groisman has a frightening quote for a peer review piece:
(Discussion, p. 59):

“If a 0.558 C increase was accompanied by a 40% increase in extreme precipitation, what can we expect from global temperature increases projected for the next few decades?”

Janssen et al. 2014 adds that models are once again lagging behind actual observations.

And in a particularly poignant concept, not only to my engineering discipline but to all of us, Groisman et al. point out that the way we design our civilization’s infrastructure should be reevaluated. The last paragraph of the paper states: “Changing extreme rainfall (regardless of cause) creates new challenges to those civil engineers who handle the consequences of extreme precipitation events. Assumptions presently being used may already be invalid and definitions (e.g., 100-yr flood, etc.) need to be reassessed to accommodate the changing climate conditions.”