Dust Bowl Drought will be AVERAGE CONDITIONS Across Much of the U.S., in 20 Years

This study by the National Center for Atmospheric Research (NCAR is sponsored by the National Science Foundation) combines three major areas of climate science in this report and summarizes 137 separate studies. The three focus areas were drought across the world over the last 1,000 years, drought between 1950 and 2008, and our future as seen by the latest climate models. 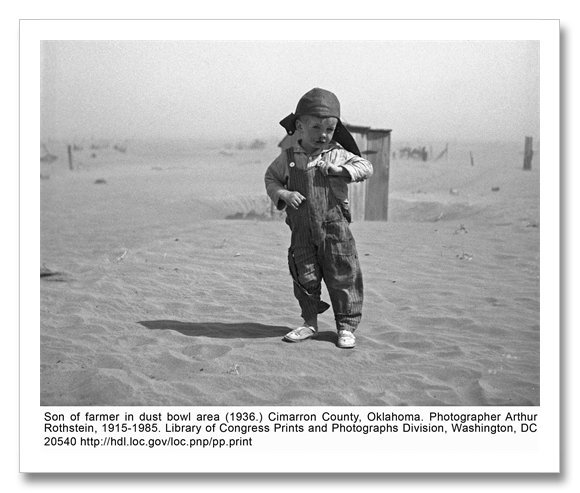 Says the author: “We are facing the possibility of widespread drought in the coming decades, but this has yet to be fully recognized by both the public and the climate change research community,” Dai says. “If the projections in this study come even close to being realized, the consequences for society worldwide will be enormous.”

From the press release "The term ‘global warming’ does not do justice to the climatic changes the world will experience in coming decades.  Some of the worst disruptions we face will involve water, not just temperature.”

From the NOAA website "The Palmer Drought Severity Index (PDSI) is most effective in determining long term drought—a matter of several months—and is not as good with short-term forecasts (a matter of weeks). It uses a 0 as normal, and drought is shown in terms of minus numbers; for example, minus 2 is moderate drought, minus 3 is severe drought, and minus 4 is extreme drought." . The Palmer Index varies roughly between -6.0 and +6.0.

Or at least it has in the past. This is the extent to which droughts have driven the index.  What I mean by "driven" is, the Index is a complicated piece of math that takes several things into consideration like rainfall, ground moisture, wind, and the angle of the sun – all things that can increase evaporation or that increased evaporation impacts.  These things, when put together the way the Palmer Index puts them together, can mean virtually the same thing for most places on Earth.

A Palmer Drought Severity Index number (PDSI) of between -4 and -6, as we saw in the Great Plains during the Dust Bowl, was an extreme drought. Just inches of rain fell each year for nearly a decade. In the Amazon however, an extreme drought might still see 20 or 30 inches of rain, but this would be so much less than normal that the existing environment would be in deep trouble. It all depends on what is normal. This is what the PDSI is so good at. It can compare the relative amount of drought stress in very different regions across the planet.

Then conditions will worsen. In fifty years, the PDSI will be two to three times as extreme as the Dust Bowl!  This type of information is simply unimaginable yet, our climate scientists have been warming us of possible desertification of the interior of continents for decades.

Now, as usual, I have even worse news. These modeling scenarios were done with the A1B scenario of the IPCC. This scenario is NOT the worst case scenario. What the A1B scenario states is that our planet will be carrying on with a pretty fossil fuel intensive society, but that significant emissions cuts will have already been made, with even more cuts ongoing.

Now, what is going on today on our poor mistreated planet is that emissions have risen to being as extreme as what the IPCC expects in their worst-case scenario, today, right now. (see here) So what does this likely mean?  That drought will be even worse than these dismal projections? 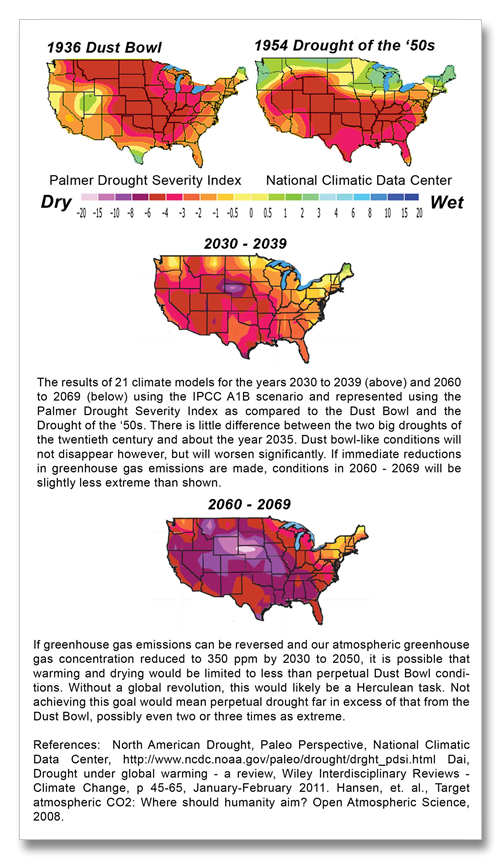 The answer is probably yes.  But the authors do say their projections could be overly extreme.  And… they also say that they could underestimate the rapidity of runoff from future storms that are expected to continue the already demonstrated trend of more rain falling faster.  This means that less water soaks in because it runs off faster and drought intensifies.

So now is one of those times that I like to remind everyone that things are indeed darkest just before the storm.  We are seeing the light disappear on the horizon. The future indeed looks dismal. But I am confident that the solutions already exist in the labs and in the papers of our scientists. We just need to start spending some money on these things. Our planet is a terrible thing to waste. Earth is really after all, too big to fail.

I ran across a passage in one of Dr. Hansen’s older papers this afternoon, when I was researching the caption in the frightening piece of climate science are above.  Dr. Hansen used the same analogy that I have been using, about our society meeting extreme global challenges like this before.

From Hansen’s Target CO2 "Present policies, with continued construction of coal-fired power plants without CO2 capture, suggest that decision-makers do not appreciate the gravity of the situation. We must begin to move now toward the era beyond fossil fuels. Continued growth of greenhouse gas emissions, for just another decade, practically eliminates the possibility of near-term return of atmospheric composition beneath the tipping level for catastrophic effects. The most difficult task, phase-out over the next 20-25 years of coal use that does not capture CO2, is Herculean, yet feasible when compared with the efforts that went into World War II. The stakes, for all life on the planet, surpass those of any previous crisis. The greatest danger is continued ignorance and denial, which could make tragic consequences unavoidable."

From the Press Release: Dai turned to results from the 22 computer models used by the IPCC in its 2007 report to gather projections about temperature, precipitation, humidity, wind speed, and Earth’s radiative balance, based on current projections of greenhouse gas emissions. He then fed the information into the Palmer model to calculate the PDSI. A reading of +0.5 to -0.5 on the index indicates normal conditions, while a reading at or below -4 indicates extreme drought. The index ranges from +10 to -10 for current climate conditions, although readings below -6 are exceedingly rare, even during short periods in small areas. By the 2030s, the results indicated that some regions in the United States and overseas could experience particularly severe conditions, with average decadal readings potentially dropping to -4 to -6 in much of the central and western United States as well as several regions overseas, and -8 or lower in parts of the Mediterranean. By the end of the century, many populated areas, including parts of the United States, could face readings in the range of -8 to -10, and much of the Mediterranean could fall to -15 to -20. Such readings would be almost unprecedented. Dai cautions that global climate models remain inconsistent in capturing precipitation changes and other atmospheric factors, especially at the regional scale. However, the 2007 IPCC models were in stronger agreement on high- and low-latitude precipitation than those used in previous reports, says Dai. There are also uncertainties in how well the Palmer index captures the range of conditions that future climate may produce. The index could be overestimating drought intensity in the more extreme cases, says Dai. On the other hand, the index may be underestimating the loss of soil moisture should rain and snow fall in shorter, heavier bursts and run off more quickly. Such precipitation trends have already been diagnosed in the United States and several other areas over recent years, says Dai. “The fact that the current drought index may not work for the 21st century climate is itself a troubling sign,” Dai says.

…Now the wind grew strong and hard,
it worked at the rain crust
in the corn fields.

Little by little the sky
was darkened by the mixing dust,
and the wind felt over the earth,
loosened the dust and carried it away.

…from The Grapes of Wrath,
written by John Steinbeck.