For a generation we have proposed climate pollution control policy based on the 100-year time frame and simple “test tube” lab evaluation of the warming potential of individual greenhouse gases (also called “global warming potential” or GWP). This was once enough to prevent dangerous climate change, but the times have changed. 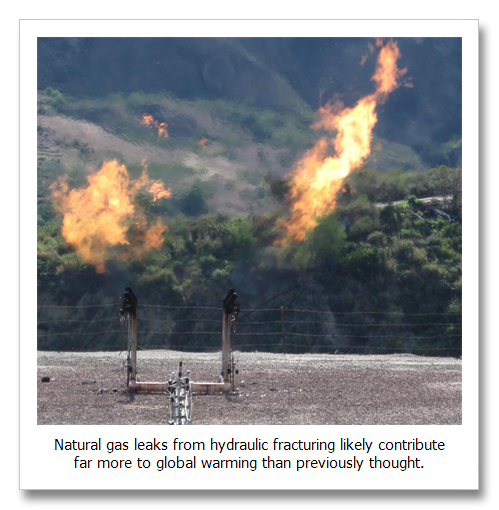 Not only do we have new knowledge of short-lived global warming and cooling pollutants, but since 1987 we have emitted as much CO2 as was emitted in the previous 236 years. (1) These things put current climate science in a completely different realm. The simple emissions reductions solutions of the Kyoto Protocol Era need updating.

Research from MIT in January looks at methane in a way that is increasing in the academic literature. Because methane’s life in the atmosphere is only decades, compared to the hundreds and even thousands of years of the life of CO2, the standard 100-year time frame that we are accustomed to viewing global warming significantly undervalues the short-term (20-year) global warming scenario.

The reason is that warming from CO2 is cumulative. Because CO2 stays in the sky so long warming continues for hundreds of years even after a complete cessation of emissions. But after a generation of two, methane disappears in our atmosphere because it has been consumed by chemical and physical reactions with other chemicals in the sky (ozone, hydroxyls and such).

The understanding that because methane (natural gas) creates only about half of the CO2 emissions as burning coal does not take into consideration the short life of methane or the extra warming in the short-term.

The principal investigator for this research tells us in the MIT press release: “Static measures, such as the GWP, give a false sense of the gases’ impacts, and could lead to unintended climate outcomes when used as the basis for policies and planning.”

What the authors want us to understand is how the timing of the reduction of different greenhouse gases matters. After 60 or 70 years, methane’s role is diminished compared to CO2, but up until that point if we reduce emissions of CO2 at a greater rate than that of methane, more warming could result than if we did nothing at all.

This research also tells us that within a couple of decades, using compressed natural gas for a substitute to gasoline in transportation ends up creating more warming than gasoline alone.

They also found that: “algae-based biofuels that incorporate a biodigester may leak enough methane to outweigh the emissions benefits over corn ethanol — a consideration that may weigh on decisions about which technology designs should be invested in and how they

1)  Instead of reducing emissions to 1987 levels by 2012 according to the Kyoto Protocol, we have actually emitted as many greenhouse gases as were emitted in the prior 236 years… The international treaty that grew out of the United Nations Framework Convention on Climate Change (UNFCCC) in Rio de Janeiro in 1992 was called the Kyoto Protocol. Only the U.S., Afghanistan and South Sudan did not ratify Kyoto, but by 1997 enough countries around the world did ratify Kyoto that it went into effect. But the world did not abide by the treaty and total greenhouse gas emissions have doubled since 1986.
From the Carbon Dioxide Information Analysis Center (CDAIC)
http://cdiac.ornl.gov/ftp/ndp030/global.1751_2009.ems
Boden et al., Global, Regional, and National Fossil-Fuel CO2 Emissions. Carbon Dioxide Information Analysis Center, Oak Ridge National Laboratory, U.S. Department of Energy, Oak Ridge, Tenn., U.S.A., 2012.

2) Fracked gas is not a bridge to an alternative energy future… Hydraulic fracturing and enhanced natural gas (methane) production are advertised to be a bridge solution to the climate pollution challenge by environmentalist, and industry alike. The reason is that burning natural gas produces only about half of the CO2 as coal. But this is the test tube evaluation of global warming. Methane (natural gas) is a global warming pollutant that is 105 times more potent than CO2 in the critical short-term time frame. But the vastly predominant global warming time frame in proposed policy discussions is 100 years or to the year 2100. Because methane only lasts about 12 years in the atmosphere, where CO2 last 300 years, the evaluation is skewed. After 20 years or so, methane stops contributing more to global warming whereas CO2 warming continues to increase for centuries. Since 2011 the production of natural gas using the hydraulic fracturing technique has increased 81 percent in the U.S., which would be a good thing except for fugitive emissions. Fugitive emissions are leaks of one sort or another in the productions and process chain. Conservative estimates for fugitive emissions for fracked gas are double that for traditionally produced gas but could be as high as four times as great. Because of this, there is additional warming (not less warming) because of fracked gas in the critical short-term time frame. Because fugitive emissions are so much greater with fracked gas and because natural gas has a short-term warming potential that is 105 times greater than carbon dioxide, research out of the National Center for Atmospheric Research reveals that there is additional warming (not less warming) because of fracked gas out to 2050 with an assumed leakage rate of 0%, and out to 2140 if the leakage rate is as high as 10%.

CO2 last 300 years…
“In fairness, if the fate of anthropogenic carbon must be boiled down into a single number for popular discussion, then 300 years is a sensible number to choose, because it captures the behavior of the majority of the carbon. … However, the 300 year simplification misses the immense longevity [10,000 years] of the tail on the CO2 lifetime, and hence its interaction with major ice sheets, ocean methane clathrate deposits, and future glacial/interglacial cycles. One could sensibly argue that public discussion should focus on a time frame within which we live our lives, rather than concern ourselves with climate impacts tens of thousands of years in the future. On the other hand, the 10,000 year lifetime of nuclear waste seems quite relevant to public perception of nuclear energy decisions today. A better approximation of the lifetime of fossil fuel CO2 for public discussion might be 300 years, plus 25% that lasts forever.”
Archer, Fate of fossil fuel CO2 in geologic time, Journal of Geophysical Research, vol. 110, 2005, page 5 of 6, Summary, final Paragraph.
http://melts.uchicago.edu/~archer/reprints/archer.2005.fate_co2.pdf

Up to 7.9 percent of natural gas escapes during the life of a fracked natural gas well… “These methane emissions are at least 30% more than and perhaps more than twice as great as those from conventional gas.” Total emissions from conventional gas are 1.7 to 6 percent of the total production for a well. For fracked gas this is 3.6 to 7.9 percent.
Howarth et al., Methane and the greenhouse gas footprint of natural gas from shale formations, Climatic Change, 106, 4, 2011, abstract.
http://graphics8.nytimes.com/images/blogs/greeninc/Howarth2011.pdf

Up to 7.1 percent of fracked gas escapes… “This excess is conservatively defined as 1.25 to 1.75 times EPA GHGI estimates.” The EPA recently increased its fugitive emissions estimate to levels that are still only about half of what the latest research shows.
Brandt et al., Methane leaks from North American natural gas systems, Science, February 14, 2014, page 735, first paragraph.
http://www.novim.org/images/pdf/ScienceMethane.02.14.14.pdf