Sometimes I read these reports and feel that all is lost. But I also read the reports about atmospheric sequestration and geoengineering. I get to see the scientists’ understanding of what may and what may not be feasible.  Then I read the economists’ understanding of the world and climate change as we know it. I put the two together and understand that, if we start spending money on our environment like we are spending it on our institutions that are too big to fail, we can tame the climate beast. 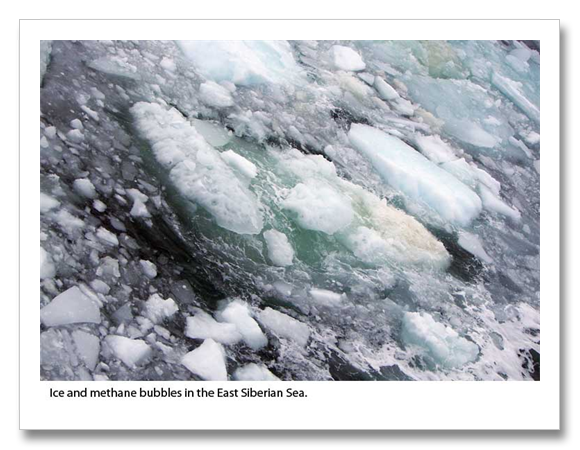 Maybe some day I will delve deeper and write more, but for now this page is dedicated to reviewing the latest findings in climate science. The methane time bomb may take the front running position in the climate crisis unless the West Antarctic Ice Sheets gets on with its dynamical disintegrating act. The situations is getting serious in the Siberian Arctic.ethane, clathrate,We can only hope that a catastrophic partial disintegration of the WAI comes first. If our civilization gets the wake up call soon enough, we can disarm the methane time bomb.

The following is reproduced from a University of Fairbanks Press Release from their International Arctic Research Center:

A section of the Arctic Ocean seafloor that holds vast stores of frozen methane is showing signs of instability and widespread venting of the powerful greenhouse gas, according to the findings of an international research team led by University of Alaska Fairbanks scientists Natalia Shakhova and Igor Semiletov. The research results, published in the March 5 edition of the journal Science, show that the permafrost under the East Siberian Arctic Shelf, long thought to be an impermeable barrier sealing in methane, is perforated and is leaking large amounts of methane into the atmosphere.

Release of even a fraction of the methane stored in the shelf could trigger abrupt climate warming. "The amount of methane currently coming out of the East Siberian Arctic Shelf is comparable to the amount coming out of the entire world’s oceans," said Shakhova, a researcher at UAF’s International Arctic Research Center. "Subsea permafrost is losing its ability to be an impermeable cap." Methane is a greenhouse gas more than 30 times more potent than carbon dioxide. It is released from previously frozen soils in two ways. When the organic material–which contains carbon–stored in permafrost thaws, it begins to decompose and, under oxygen-free conditions, gradually release methane. Methane can also be stored in the seabed as methane gas or methane hydrates and then released as subsea permafrost thaws.

These releases can be larger and more abrupt than those that result from decomposition. The East Siberian Arctic Shelf is a methane-rich area that encompasses more than 2 million square kilometers of seafloor in the Arctic Ocean. It is more than three times as large as the nearby Siberian wetlands, which have been considered the primary Northern Hemisphere source of atmospheric methane. Shakhova’s research results show that the East Siberian Arctic Shelf is already a significant methane source: 7 teragrams yearly, which is equal to the amount of methane emitted from the rest of the ocean. A teragram is equal to about 1.1 million tons.

"Our concern is that the subsea permafrost has been showing signs of destabilization already," she said. "If it further destabilizes, the methane emissions may not be teragrams, it would be significantly larger." Shakhova notes that Earth’s geological record indicates that atmospheric methane concentrations have varied between about .3 to .4 parts per million during cold periods to .6 to .7 parts per million during warm periods.

Current average methane concentrations in the Arctic average about 1.85 parts per million, the highest in 400,000 years, she said. Concentrations above the East Siberian Arctic Shelf are even higher. The East Siberian Arctic Shelf is a relative frontier in methane studies. The shelf is shallow, 50 meters or less in depth, which means it has been alternately submerged or terrestrial, depending on sea levels throughout Earth’s history. During Earth’s coldest periods, it is a frozen arctic coastal plain, and does not release methane. As the planet warms and sea levels rise, it is inundated with seawater, which is 12-15 degrees warmer than the average air temperature. "It was thought that seawater kept the East Siberian Arctic Shelf permafrost frozen," Shakhova said. "Nobody considered this huge area." Earlier studies in Siberia focused on methane escaping from thawing terrestrial permafrost. Semiletov’s work during the 1990s showed, among other things, that the amount of methane being emitted from terrestrial sources decreased at higher latitudes. But those studies stopped at the coast.

Starting in the fall of 2003, Shakhova, Semiletov and the rest of their team took the studies offshore. From 2003 through 2008, they took annual research cruises throughout the shelf and sampled seawater at various depths and the air 10 meters above the ocean. In September 2006, they flew a helicopter over the same area, taking air samples at up to 2,000 meters in the atmosphere. In April 2007, they conducted a winter expedition on the sea ice. They found that more than 80 percent of the deep water and greater than half of surface water had methane levels more than eight times that of normal seawater. In some areas, the saturation levels reached at least 250 times that of background levels in the summer and 1,400 times higher in the winter. They found corresponding results in the air directly above the ocean surface. Methane levels were elevated overall and the seascape was dotted with more than 100 hotspots. This, combined with winter expedition results that found methane gas trapped under and in the sea ice, showed the team that the methane was not only being dissolved in the water, it was bubbling out into the atmosphere. These findings were further confirmed when Shakhova and her colleagues sampled methane levels at higher elevations.

Methane levels throughout the Arctic are usually 8 to 10 percent higher than the global baseline. When they flew over the shelf, they found methane at levels another 5 to 10 percent higher than the already elevated arctic levels. The East Siberian Arctic Shelf, in addition to holding large stores of frozen methane, is more of a concern because it is so shallow. In deep water, methane gas oxidizes into carbon dioxide before it reaches the surface. In the shallows of the East Siberian Arctic Shelf, methane simply doesn’t have enough time to oxidize, which means more of it escapes into the atmosphere. That, combined with the sheer amount of methane in the region, could add a previously uncalculated variable to climate models.