Extreme Weather Across the U.S. Increases Because of Climate Change

A phone conference and press release about climate change induced extreme weather, by the Union of Concerned Scientists, brings to light what climate scientists have been telling us for decades. The Union of Concerned Scientists (UCS) is the leading U.S. science-based nonprofit organization working for a healthy environment and a safer world. Founded in 1969, UCS is headquartered in Cambridge, Massachusetts, and also has offices in Berkeley, Chicago and Washington, D.C. 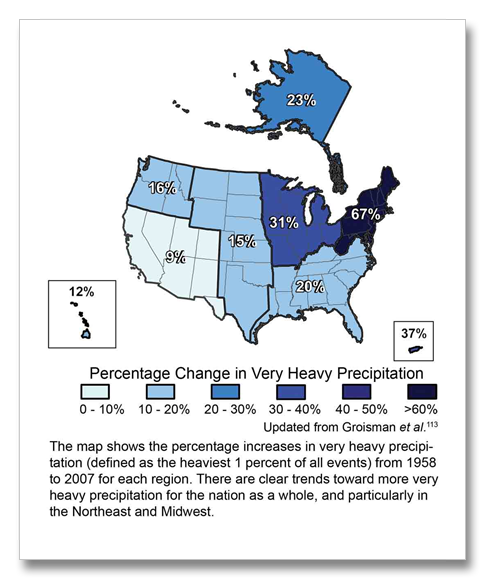 The UCS says that the amount of rain or snow falling in the heaviest one percent of storm has increased 20 percent in the last several years across the U.S. this is almost three times the rate of increase between 1958 and 2007, signaling what may have been a threshold crossing. The Northeastern U.S. has seen a 67 percent increase in the amount of rain and snow falling in the heaviest storms. The land area classified as very dry with a Palmer Drought Severity Index (PDSI) of -3 or more extreme has more than doubled since the 1970s. A PDSI of -3 to -3.99 is a sever drought, -4 and less is an extreme drought and the bottom of the chart.

Dr. Kevin Trenberth from the National Center for Atmospheric Research, sponsored by the National Science Foundation, in his paper "Changes in precipitation with climate change" reminds us that drier areas will get drier and wetter areas will get wetter, for the most part. Rain will come faster in greater quantities, but will occur less frequently. More intense but less frequent rains lead to more runoff per storm with less water soaking in to the ground which because the storms of less frequent, leads to more drought.

He also tells us that air holds 4% more moisture per degree Fahrenheit of warming, (7% per degree C) which might not sound like a lot, but it really adds up. More moisture in air releases more heat as it condenses, rising into a cloud, this extra heat creates more lift which draws in yet more air. It is the primary mechanism that creates a more intense thunderstorm than would otherwise have been created. It is also a feedback mechanism that feeds upon itself. A little bit more moisture creates a little ore updraft which brings in a little more moisture which creates even more updraft, shazaam – severe thunderstorm.

A thunderstorms increase in precipitation is based on this ability to pull in moisture from large surrounding areas. This area has been demonstrated to be ten to twenty five times larger than the size of the rain area. So the 4% increase in moisture in the air per degree F.

Trenberth warns us that nearly all climate models misrepresent rainfall because f climate change. The almost all allow rainfall to begin too soon, and do not create enough rain with any individual rainfall event. This of course negatively impacts the hydrologic cycle because heavier rains mean more runoff and more frequent drought because less rain soaks in the ground.

Floods on the Mississippi?  Across the Nation, April 2011 was the tenth wettest on record, but here in my hometown of Austin, April was the driest April on record. We are in the midst of our third extreme to exceptional drought here in the last seven years. The drought is so extreme here that the inflows to our local reservoirs have , twice in the last three years, fallen to levels that are lower than the drought of record here, which is the drought of the 1950s.  Inflows to our reservoirs have not been as low as the were in the 1950s at any other time.