The Texas Forest Service has come out with their final numbers on the 2011 tree kill. After counting plots and comparing to before and after satellite photos, 301 million trees were killed by drought and disease related to drought in 2011. this is right in the middle of their 100 to 500 million estimate (see December 19, 2011 Discussion). 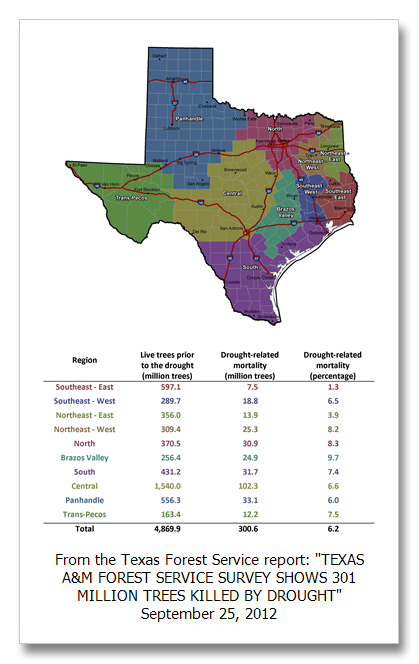 East Texas got off the easiest with a minimum of 1.3 percent mortality. The worst was parts of north central and northwest Texas in the Brazos River valley with nearly a 10 percent mortality. Central Texas saw over 100 million of these 300 million tree deaths, and a mortality of 6.6 percent. but Central Texas also has triple the number of trees than any other region of Texas at 1.5 trillion total.

The survey looked at trees over 5 inches in diameter. At my house in southwest Austin (Oak Hill), I could see a half dozen dead trees, or probably twice that many in reality, from my front yard. Two or three were up the street in peoples yards and a bunch were in the park next to my house. But these were only, like the Texas Forest Service counted, trees over 5 inches in diameter. In my yard I had at least half a dozen small trees die in the drought but I watered my big trees and they, so far, have shown no signs of stress related disease. Across the street, up the street and especially in the park, the undergrowth took a heavy hit. far—far more small trees died than the ones the TFS counted.

Also mentioned in this report was the 272 million trees killed in the previous droughts still standing, as the TFS report put it, “littered the landscape before the drought.”

And the drought goes on. Our lake levels have hardly budged an inch since the drought ended last winter. Even though we had near normal rainfall (so far) this year, it all came in just a few short periods with the intervals between almost bone dry. This exacerbates the stress of small trees. This stress also persists. Big trees continued to die this year even though the drought was ended. It appeared to me that the continuing mortality rate was between five and ten percent of the original carnage.

The Texas Forest Service did mention that these dead trees would be losing their carbon in this statement in the final paragraph of their report: “They will [the dead trees] also begin to release their stored carbon back into the atmosphere and could become potential hazards during times of high winds and dangerous fire conditions.” This is the only mention of anything climate related. Better than nothing and better than normal for anything climate change related in Texas, especially from governmental agencies.