Update: The final count is 301 million, right in the middle of the 100 to 500 million estimate. See October 24, 2012 discussion https://climatediscovery.org/final-count-for-2011-drought-tree-kill-in-texas/

In a preliminary report, the Texas Forest Service says that 100 million to 500 million trees have been killed across Texas. A more detailed evaluation is due out in the spring. What was done this time was a survey of foresters and agriculture specialists across the state. What they found was that 2 to 10 percent of Texas’ trees have perished, not including trees killed by wildfire.

Worst hit of Texas’ 63 million acres of forested lands include parts of Caldwell and Bastrop counties southeast of Austin, parts of five counties to the north and west of Houston, including Harris County (the greater Houston area), and much of the forested area between Kerrville and Fredericksburg and the edge of the Central Texas forest west of Junction.

My own personal surveys and scouting for my film work extended from Houston to the edge of the forest west of Junction. These surveys were just windshield surveys, and the extremeness of the kill was about the same from Galveston Bay all the way to Fredericksburg. Beyond Fredericksburg westward, the kill was probably two or three times greater than east. I estimated 500 million trees killed along that east west line from Houston to Junction and 100 miles either side. Making a wild-assed-guess that 70 percent of this area is forested, and a few more than 20 drought killed trees per acre on average would yield a half billion trees. 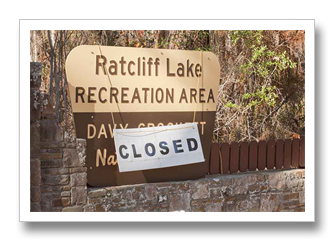 Texas’ 63 million acres of forested land yields 8 drought killed trees per acre according to the Texas Forest Service, or 500 million of the 4.9 billion trees in our state’s forest. Considering the average number of trees per acre in Texas is 78, the estimate of 8 trees per acre killed seems quite a bit low to me. My surveys showed a good quarter of the trees along that 330 mile long stretch of road between Houston and Junction were brown and dad looking (they could be just dormant), not ten percent. However, windshield surveys might be deceiving. In Rocky Mountain National park I did a grid count and found that what looked like more 80 or 90 percent kill from the road was actually about on half to 2/3rds kill. All that red in the canopy, seen from the road, seems to overwhelm the remaining live trees, or in the case of Texas–brown.

It seems that there is a bit of conservative estimating going on with the TFS. Natural mortality of trees in a forest is about one percent per year. Stating that the bottom estimate of mortality is two percent is almost certainly far below the actual number of trees killed.

We will see. Unfortunately, even if the drought eases trees will continue to die. As an example of how hard drought is on trees, one paper I read about forest mortality from drought in Texas tells us that the Central Texas forest is likely still recovering from the drought of the 50s. This paper was written in the mid 1990s.

The pine forest and park entrance monument are in the Davy Crocket National Forest northeast of Houston. Ratcliff Lake Recreation Area is closed for logging of hazard trees. This is all too familiar to me from the Rockies where the pine beetle has ravaged somewhere near 70 million acres by now. The beetle pandemic there, like here, is because of warming. There, the beetles numbers have skyrocketed because of stressed trees and low temperatures that have risen above levels that kill beetles in a meaningful way. In Texas, it’s a different species of pine beetle that appears to have caused much of the havoc in the area I surveyed at Ratcliff Lake.

The beetle outbreak at Ratcliff is likely enhanced because of drought stress. The trees cannot defend themselves in times of drought because there is not enough moisture to make sap to push the little boring beetles out of their boreholes. Consequently, the beetle is running rampant. In the recreation area itself, about half of the trees have been cut, and a significant number of the remaining trees are red. Remember, pines generally don’t turn red until the season after they are attacked and have died. I also identified a number of green trees that were actively being attacked with live beetles. If this area is like others I’ve seen, most of the trees will have to be cut to keep them from falling on visitors.

On the other side of the state, from the edge of the oak/juniper woodlands in the Hill Country forest west of Junction all the way to Austin and Bastrop and on to Houston, the trees that browned off last summer still have their brown leaves. In Texas, about two-thirds of the trees lose their leaves naturally in the fall leaf turn and the brown trees just look like more autumn leaf turn. 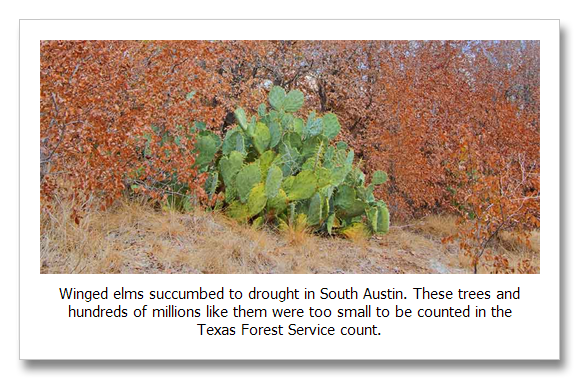 The image with the prickly pear cactus is from south Austin in September; a good 6 to 8 weeks before these winged elms normally lose their leaves in the fall.

I lost several large shrubs and a number of smaller perennials at my house in southwest Austin. All of them were natives, but even being a native doesn’t help if it doesn’t rain. In the twelve months from September 2010 to August 2011, we had 11.2 inches of rain.

About a third of my Saint Augustine grass bit the dust and my summer veggie garden was abysmal. I just gave up on my tomatoes. They quit setting fruit in April this year. Tomatoes do that when the afternoon and or overnight temperatures go above 90 degrees or 70 degrees respectively. We had 90 days of 100 degree or hotter temperatures this summer, 29 days more than the previous record set in 2009.

The final image is from the Fredricksburg area about 90 minutes west of Austin. Out there the drought has been so bad for the last 6 years that in places, half of the live oaks have dropped their leaves completely. Many of these trees are dead as they have not leafed out in several years. It will be a few year yet before we know if this latest crop of leaf drop will result in dead trees or not in these areas. But even if the drought does not kill the trees directly, disease can set in because the trees are so, so weak.

One fungus in particular is wreaking havoc in these parts because of the drought. A particular fungus called hypoxylon canker simple loves trees with low moisture content in their live wood. Stress and particularly drought stress result in this condition and the hypoxylon canker has become widespread. Trees attacked by hypoxylon general show ruptures in the bark and weeping ooze coming from the wounds. 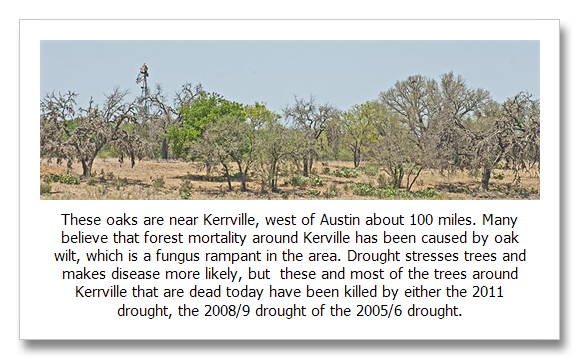