Because of climate change, our nation’s forests are dying faster than they are regenerating. This was not supposed to happen for a long, long time. It’s really something that is not even projected, except in very vague terms about ecosystem transformation. But today, already, we see our forests dying faster than they can regenerate, regardless of the projections.

This reality tells us that the possibility of forest restoration in western North America is rapidly dwindling. The deeper meaning here is that climate change mitigation through forestation and reforestation is becoming challenged far beyond what we have been anticipating as one of the major mitigation methods to deflect the worst impacts of climate change.

The other highly disturbing thought about this news is that it means our forests are no longer absorbing greenhouse gases, but emitting them, further exacerbating warming. The numbers on this stark observation are not published in the academic literature yet, but when mortality exceeds growth, the carbon balance flips from one of sequestration to one of emissions.

The rate at which our national forests are dying foretells a scenario where recovery can only happen if we reduce warming. Reducing warming requires removal of long-lived climate pollutants from our skies. Emissions reductions, even the best-case scenario of the Paris Climate Change Commitments, do not reverse warming. Instead, they allow continued and dramatic warming which will only enhance forest dieback further. The numbers are staggering.

Forest2Market was started in 2000 with a mission “to empower participants in the global forest, wood products, paper products, biochemical and bioenergy industries to make exponentially better decisions through the strategic application of industry expertise and unique datasets.” Their Market Watch post on May 18, 2018 summarizes Forest Resources of the United States, 2017: a technical document supporting the Forest Service 2020 Resource Planning Act (RPA) Assessment. The following quotes are from Forest2Market’s article:

“Per a 2017 Resources Planning Act (RPA) Assessment update to the Forest Resources of the United States technical document, the situation in public, government-managed forests in the western US is dire. Based on new data published in this RPA, the U.S. Forest Service (USFS) says that forest mortality exceeded net growth on America’s national forest timberlands in 2016.”

“Forest growth was 48 percent of mortality, while timber harvests were a mere 11 percent of what is dying annually—and this trend is on the rise. The agency estimates that 6.3 billion dead trees were standing in 11 Western states in 2015, up from 5.8 billion in 2010.”

Healthy Forests Healthy Communities put the data together like this: 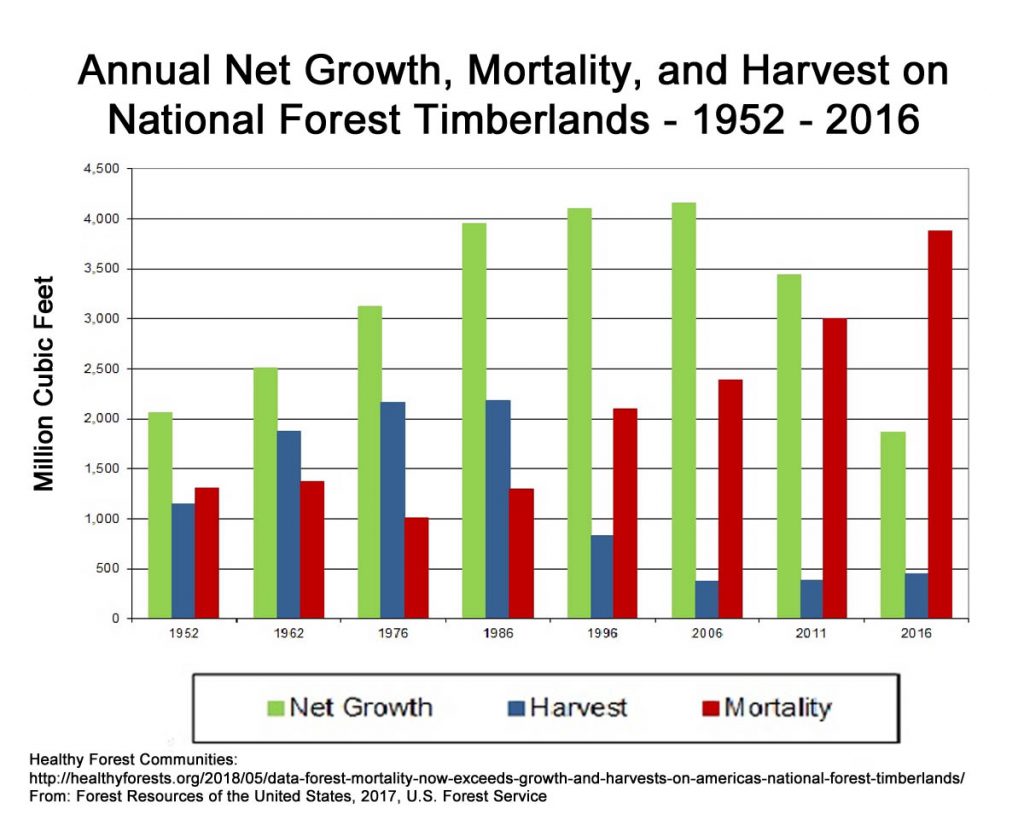