Paris Warms, Not Cools, for Thousands of Years 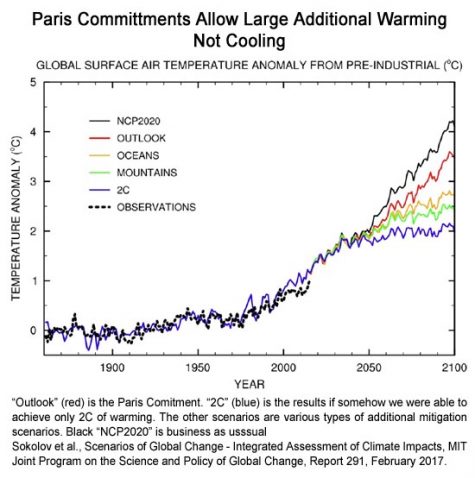 It’s a widely held misconception that implementation of Paris Climate commitments would tame the climate beast. This has no more been the case in the past than it is today. Our culture of climate policy has always relied on overshoot, or additional increase in temperature as we implement greenhouse gas regulations and reduce the amount of emission we make. This latest work reconfirms modeling that has been around since the mid-1990s  that tells us that no, Paris does not cool, it warms.

Why do we generally think that Paris will save us? It has a lot to do with the quest for action over the decades. We have been trying to implement emissions reductions for so long that implementation of anything seems like a win, even though implications are exactly opposite.

When policy was first proposed, we had no idea the delay would be this long, even though the scientific community warned us that delay would mean drastically increased impacts and proportionally more difficult solutions. So this overshoot was acceptable.

It is meaningful to compare recent projections of future warming with the past because further delay has increased future warming in this newer work. The gold standard that the IPCC has used since it changed its scenario strategies to total atmospheric loading from emissions reductions after the 2007 IPCC report, has been Meinshausen et al., 2011. Their temperature and CO2 projections are below. 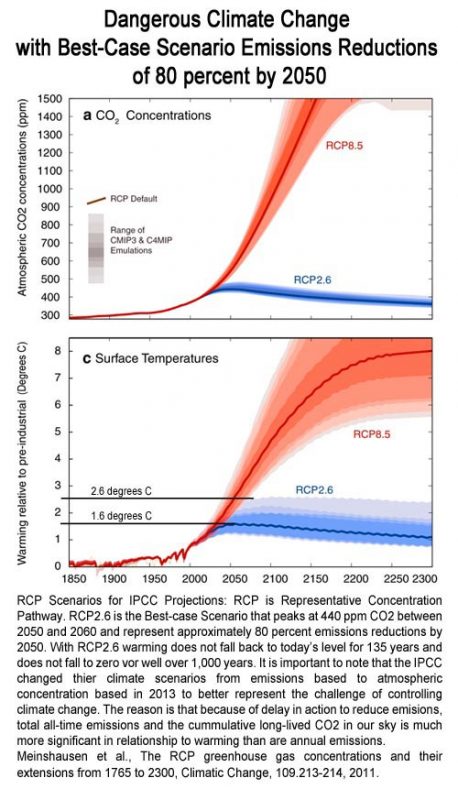 Under the Best-case scenario of RCP 2.6, which is described as “Strong emissions reductions,” and from which it is appropriate to assume that the Paris Commitments are very similar, near term warming (35 to 45 years) has not changed much, but warming to 2100 has increased by about 50 percent. This implies a number of things relative to near term warming and it’s importance. Near term warming is locked in by the load of warming pollutants already emitted and remaining in our sky. There is not much that future action on emissions reductions alone can do to change this. To make a meaningful change, we must move immediately to atmospheric CO2 removal. It’s the already emitted, long-lived warming gases that make the biggest difference in future temperature.

The long-term future is also meaningful, if triple to quintuple the warming we have already endured is not meaningful enough. With full implementation of Paris Commitments, warming does not return to today’s levels (under the older, limited warming 2011 standard) for 135 years, and it does not return to zero warming for well over 1,000 years.