Global Warming has Already Doubled the Droughts and Floods in the U.S. Southeast

A Duke University-led team of climate scientists has looked at 60 years of U.S. and European weather and climate data and found the Bermuda High has increased in intensity. Their finding have shown that this, in-turn, has led to an increase in the intensity of the weather extremes in the southeastern U.S. 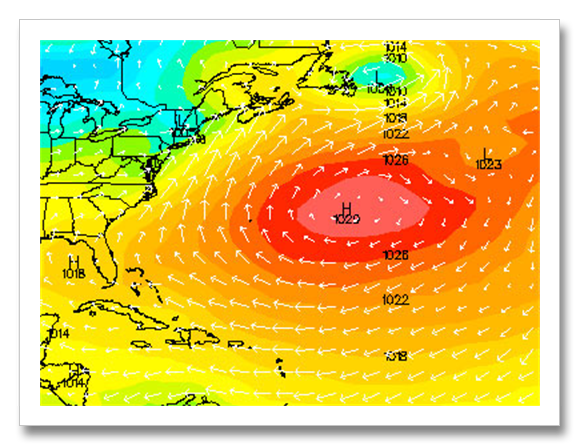 The Bermuda High, called the Azores High in Europe, is a semi-permanent high pressure area in the south central North Atlantic Ocean that has ocean-wide, semi-hemispherical impacts on the weather. It plays different roles in driving weather systems from Africa to North America and from North America to Europe and Scandinavia.

“This is not a natural variation like El Nino,” says lead author Wenhong Li, at Duke’s University’s Nicholas School of the Environment. “We thoroughly investigated possible natural causes … Our analysis strongly suggests that the changes in the [Bermuda High] are mainly due to anthropogenic warming. The team found that, not only did the Bermuda High get stronger, but it moved westward.  At the same time, extreme weather in the U.S. Southeast (rain storms and drought) have doubled in the last 30 years.

So far the increases in extremeness has been split almost 50/50 between wet and dry extremes. What will the future be, as seen by the team?  It depends on the future track of the high. If it is a little more northwest, the future will be dryer, a little more southwest, wetter.

"It took more than three thousand years to make some of the trees in these western woods … Through all the wonderful, eventful centuries since Christ’s time—and long before that—God has cared for these trees, saved them from drought, disease, avalanches, and a thousand straining, leveling tempests and floods; but he cannot save them from fools." John Muir

Li, et. al., Changes to the North Atlantic Subtropical High and Its Role in the Intensification of Summer Rainfall Variability in the Southeastern United States, Journal of Climate, October 2010.