Himalayas: "There’s been a super-rapid decline in the glaciers of the region"

"There’s been a super-rapid decline in the glaciers of the region" This quote is from "Ice, Snow, and Water: Impacts of Climate Change on Himalayan Asia & California", University of California, San Diego, Sustainability Solutions Institute. 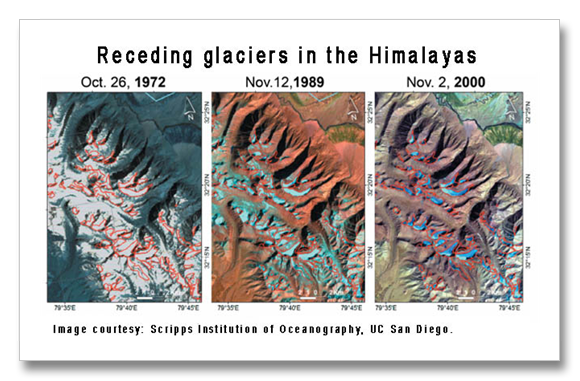 Glacier National Park will not be the only place that is glacierless in 20 to 30 years. The scientists at this forum At UC San Diego are not optimistic about most of the ice on this planet outside of polar regions. These high mountain zones where glaciers once ruled have a changing climate that is amplified with the same effect that causes polar amplification of climate change, mostly the ice albedo feedback mechanism. This effect works much like defrosting an old fashioned refrigerator freezer. It take a long time to get the ice to start melting much, but once it does, it all melts pretty fast.

These glaciated regions contain the water that supplies between one and two and a half billion people. The water is stored in snow pack each winter and slowly melts through the summer to fill reservoirs. Earlier melt does a number of negative things to the water budget. As the glaciers melt, the winter snows will melt much faster and earlier in the spring. To capture the runoff more quickly, much larger reservoirs are needed.  As the annual snowmelt finishes earlier every year, the mountains will warm more in the summer, delaying the onset of snow in the fall, diminishing the annual snow pack. Less snowmelt and moisture in the summer will feedback to create even drier conditions that cause less rain in summer and delay the onset and quantity of winter precipitation which speeds the melt even further in the spring.

Charles Kennel, is a UCSD researcher who served as director of Scripps from 1998 to 2006; he says “We are trying to make it known that the Himalayas are to the issue of the world’s water supply problem what the Amazon rain forest is to the issue of deforestation,”