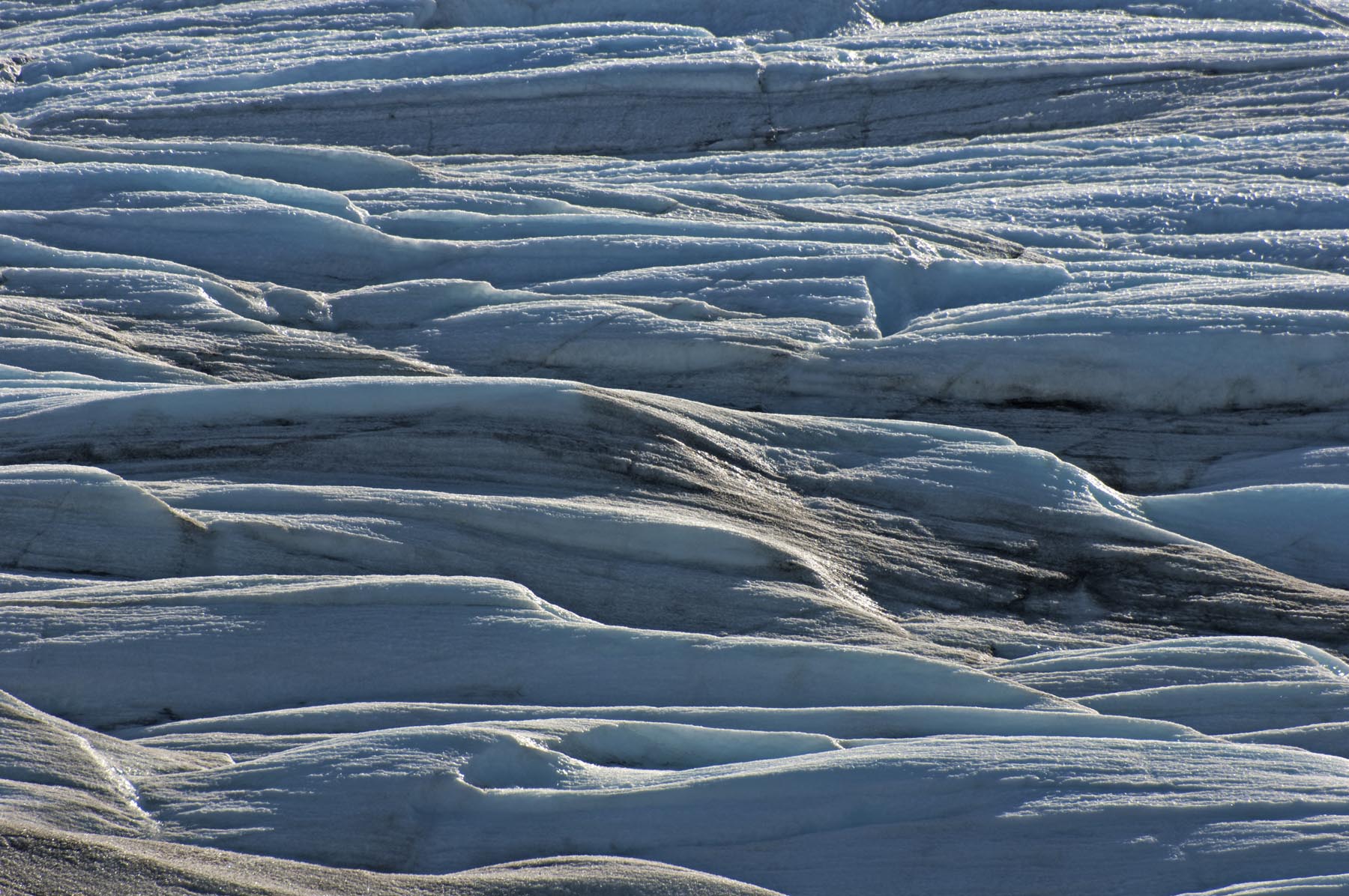 Wind scoured blue ice on the Greenland Ice Sheet: Katabatic winds, or gravity driven monster winds up to 150 mph sustained, can literally blow the ice away. It’s easy to see the wind direction in this image. Just off screen, a nuntak, or mountain island in the ice sheet, deflects winds in this area to create ice scour that reveals ancient blue ice. At the site of this research in Antarctica, a similar wind scour 50 miles long has been gouged out of the West Antarctic Ice Sheet at a point near the grounding line of the Ronne Ice Shelf. Here, waters of the Weddell Sea circulate beneath the ice sheet melting as they go. This research shows that with a warm ocean, underice melt can continue at an accelerated rate even when an abrupt change causes air temperatures to plummet.

Fifty-two feet of sea level rise occurred in 400 years, 14,500 years ago with ocean and collapse conditions similar to today. We were coming out of the last ice age then, but then, forcing was thousands of times less than today.

Our climate’s most meaningful and common changes are classified as abrupt changes in climate science. Twenty three of them have occurred in our last 100-thousand year long ice age. They mostly happened  with global temperature change of 9 to 15 F and 25 degrees F or more in Greenland. The most recent and longest was between 11,000 and 15,000 years ago and was up to 18 F in Greenland, and 11 F globally, in just a couple of decades.

It was caused by melt from the massive Laurentide Ice Sheet that covered the north half of North America at the end of the last ice age that began about 18,000 years ago. The ice was a mile deep over New York City with an epicenter two miles high over Hudson Bay, slightly shifted to the east of the northern part of North America.  The melt formed a giant lake over south central Canada called Lake Agassiz after the discoverer of ice ages.  About 14,600 years ago it became so large that it broke through the lobe of ice that carved out the Great Lakes and its outflow changed from the Mississippi basin to the St. Laurence, and then to the North Atlantic via New Newfoundland.

The massive influx of freshwater melt, being lighter than salt water, floated on the North Atlantic and shut down the Gulf Stream. This shut down stopped the northward flow of warm water from the South Atlantic and plummeted our planet back into the deep abyss of ice age cold. But underice melt continued. Some research says that parts of Greenland Ice Sheet and Antarctica collapsed and raised sea level 65 feet in as little as 200 years.

Today, Greenland melt has created a massive pool of buoyant fresh melt water in the North Atlantic east of Newfoundland. The pool has reduced flow in the Gulf Stream 40 percent since the mid 2000s. (Link)

Enter Fogwill et al., and a team of 21 researchers from Australia to the UK,. This team has created a half mile-long “horizontal ice core” from the Ronne Ice Shelf in West Antarctica. The location is peculiar in that it consists of blue ice scoured by katabatic winds that can reach a sustained 150 miles an hour with gusts to 200 mph. The winds have so scoured the ice for 50 miles that surface sampling along a transect allowed the team to look at 5,000 years of ancient ice.

Using heavy hydrogen analysis to determine ice elevation, the found that this area of the ice sheet lost 2,000 feet in elevation during the abrupt cold reversal. Their unexpected results reveal that the return of glacial temperatures cooled surface waters but not deeper waters that remained warm, melting the underside of the ice shelf and causing the reduced ice sheet elevation.

The connection to today is that we see the same cool surface/warm deep setup. The cool surface water is melt from increased ice discharge. The cooler water, just like in North Atlantic Gulf Stream shutdown, inhibits surface water mixing with deeper water. It works exactly like the thermocline at the lake, only in reverse. At the lake in summer, the surface water is warm, but just three to five feet below the surface there is a distinct line where the water turns markedly cooler. This is the way water behaves whether it’s a lake or an ocean–it stratifies. Dissimilar bodies of water tend to not mix very well. 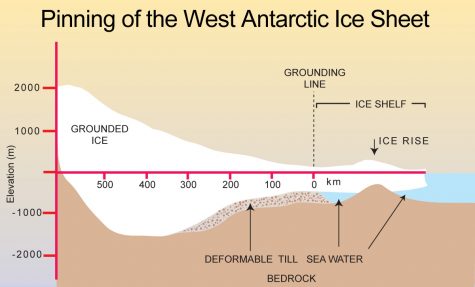 Underice Pinning: Oppenheimer, Global warming and the stability of the West Antarctic Ice Sheet, Nature, May 28, 1998.

Compounding the story today are two critical feedback mechanisms. Increased winds with warming drive an increased amount of ever warming water beneath the cool surface cap. This not only increases warming, but it melts the bottom of the ice sheet up away from pinning points that slow the outward flow of ice.  Recent ice sheet collapse modeling  by Deconto and Pollard tells us that these underice pinning points are very important in slowing the outward flow of ice from the interior ice sheet. When the ice melts above pinning points, their first successful modeling of ice sheet collapse physics reveals collapse initiation begins. Fortunately, if warm ocean waters are cooled back to their equilibrium state, the initiation is shown to reverse. So there could be a solution to stop collapse initiation.

The pinning points themselves were formed in part due to the sheer weight of the ice itself. The West Antarctic ice sheet extends a mile below sea level and over 10,000 feet above sea level. All this ice flows outward towards the ice shelves like pancake dough. When it thins enough and the ocean gets deep enough, it floats until it melts at the outer edge and or breaks off and floats away.

Now we see accelerating melt with warmer ocean waters melting the underside of the ice up above these pinning points and the ice sheet has begun collapse initiation.

“Current projections of global mean sea level (GMSL) imply only moderate increases by the end of the twenty-first century. These projections, however, do not fully include ice-sheet-ocean dynamic feedbacks which are believed to have triggered rapid continental ice-sheet retreat and driven periods of abrupt sea-level rise during the geological past. The LGT [Last Glacial Termination — end of the last ice age 18,000 years ago] offers a potential process analogue for future climate trends, characterized by multi-millennial global warming, poleward migrating and strengthening westerly winds , and increasing atmospheric carbon dioxide levels, similar in magnitude to future projections.” 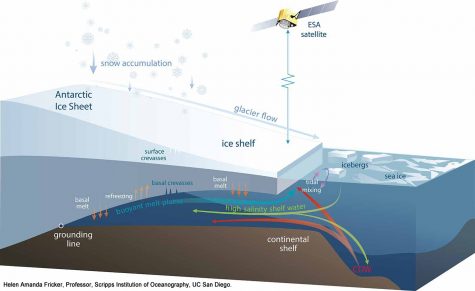 The authors cite 52 feet of sea level rise in  400 years during this abrupt change for an average of 13 feet per 100 years and there was probably a peak that was even greater than 13 feet per century. The underice melt conditions they describe likely affect all of Antarctica, and the last sentence of their abstract says: “With increasing stratification of the Southern Ocean and intensification of mid-latitude westerly winds today, such teleconnections [increased winds on a warmer planet] could amplify AIS mass loss [ice sheet ice loss] and accelerate global sea-level rise.”

The second feedback of signficant concern is a fundamental piece of physics; fresh water floats on salt water. As ice beneath the floating ice shelves melts, it floats up and out from beneath the ice. This pulls deeper, warmer water beneath the ice. Today, as during the period studied by this team at the Last Glacial Termination, this extra warm water not only enhances underice melt, but it melts the ice up above pinning points, allowing the collapse mechanisms described by Deconto and Pollard to initiate.