In the Western North America, The Worst Drought Since 1951 Will be Repeated Three to Five Times by 2030

One of the authors of this study says: "Frankly, I was expecting that we’d see large temperature increases later this century with higher greenhouse gas levels and global warming . . . I did not expect to see anything this large within the next three decades. This was definitely a surprise." 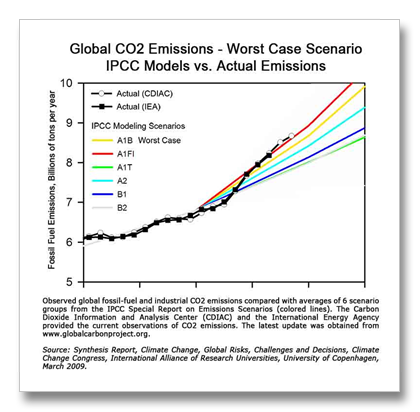 The IPCC "likely" scenario says that the earth will warm by 1.8 degrees C by 2039 (3.6 degrees F). The extensive increases in heat waves and extreme temperatures in the modeling do not reflect that CO2 concentrations are increasing as rapidly or even more rapidly than the worst case scenario (see here).

The title of this discussion is bad enough, but we all have to remember that most of the climate studies today are being performed with IPCC model scenarios, this study included.  The IPCC model scenarios are significantly conservative as has been shown by current impacts of climate change consistently happening faster and with more extreme impacts than the models had predicted. The graph "Global CO2  Emissions – Worst Case Scenario IPCC Models vs. Actual Emissions" shows actual CO2 emissions are higher than the IPCC A1F1 scenario. The A1F1 (the red line) is the highest emission scenario that the IPCC considers. In effect, this is the worst case scenario. Actual CO2 concentrations, from data from both major sources in the climate community (the black lines) is higher than the A1F1 worst case scenario.

What does this mean?  In the short term, and especially with the way that Greenhouse gas regulations ore going on Earth today, this trend will continue.  And by the short term, I mean climatologically. This short term would be for at least the next decade. Remember, the time frame for climate discussions, the amount of time that it takes something to happen with climate – including emissions mitigations effects – starts in decadal time.

Now the big trouble with not acting quickly on regulating greenhouse gases of course is feedback mechanisms.  The longer we wait to react, the greater the impacts that feedback mechanisms will have. This means that our efforts to control global warming will need to be greater than we have anticipated if we continue to delay action.

Compounding this concept, the track record of the world for addressing climate change through greenhouse gas mitigation is appallingly bad.  We have almost universally not met Kyoto goals, or flatly refused to acknowledge the Kyoto protocol in the case of the largest greenhouse gas polluter, far larger than China – the United States.

What this means is that our emissions will continue to outpace the worst case IPCC scenario and that difference, unless we make extraordinary emissions cuts much sooner than it appears anything will happen, will continue to grow.

Looking at Diffenbaugh and Ashfaqs paper in Geophysical Research Letters, they say that the longest heat wave that occurred between 1951 and 1999 will happen three to four times between 2010 and 2020. These heat waves will increase in the 2020 to 2030 decade happening 8 times in the American West and 4 times in the East. The paper also notes that there will be increased variance in the north central U.S. 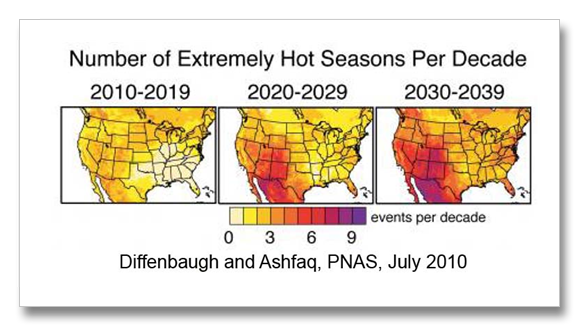 The 95% temperature exceedance, that is the number of days that will be hotter than it is during the hottest five percent of the year (18 days), during the decade 2020 to 2039 will be exceeded 30 over most of the nation and in Texas to 52 days. Which is to say that the number of extremely hot days will more than double.

Based on their work, Diffenbaugh and Ashfaq tell us that dangerous global warming could occur before the commonly accepted 2 degrees C threshold is met.  But most alarming, the authors stick to the old science. They do not start their models at today’s concentrations of greenhouse gases, nor do they consider the world’s trajectory of increase since the A1B scenario was formulated in 2000 with the third IPCC Report.

The report paper ends "…the response to a given GHG stabilization target is likely to be greater than to the equivalent concentrations within the [modeling] tested here. Although accurate decadal-scale climate prediction represents a significant challenge (e.g., [Meehl et al., 2009]), the intensification of hot extremes reported here suggests that constraining global warming to 2 °C above pre-industrial conditions may not be sufficient to avoid dangerous climate change."