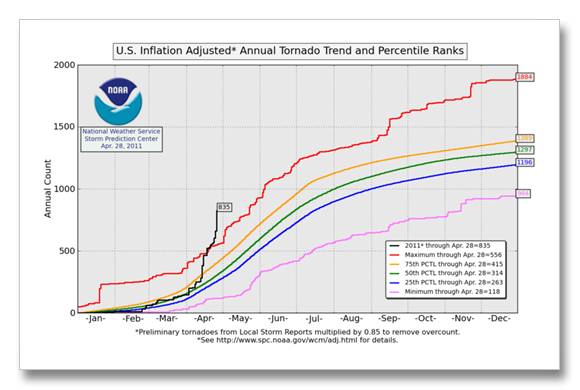 More than 175 have been killed. Let’s put this into perspective. In 1936, the U.S. population was about 128 million. Today it has almost tripled to 308 million. Supposing that the population density has remained the same (it has not, many more people live in the cities now than they did in the ’30s) we should expect triple the casualties (about 1,000).

But there’s more: Building codes today are much more strict than they were in the ’30s, meaning there are fewer casualties today than in the past, but early warning is possibly the greatest improvement in life saving techniques today. In the 30’s, tornado warning systems had not even been invented yet. Today we have Doppler radar, instant weather warning radios, civil defense systems that warn entire communities with sirens and virtually instant communications with television, radio and the internet. The first official tornado warning was made in 1948. The first method of broadcasting emergencies, intended to alert the public of a Soviet attack during the cold war (and tornadoes), was started in 1951. The Emergency Broadcast System was initiated in 1963. So, is it fair to say that deaths from this outbreak would have been at least three times what they were form the outbreak in 1936? Possibly. Is it fair to say that deaths from this tornado outbreak would have been a lot more, say double, if building codes had of not been upgraded to prevent deadly catastrophes from tornadoes? Likely. What about the great advances in warnings made possible because of Doppler radar? Very likely. And what about Twitter? Yes, even Twitter has been credited with saving lives during tornado outbreaks. Would this outbreak have caused more fatalities than the 746 during the great Tri-State Tornado Outbreak in March 1925?

A NOAA/National Severe Storms Laboratory study of the 1999 Oklahoma City tornado compared the death toll from that event with what could have been expected if advances in warning technology and building codes had not evolved to their current state today. The Oklahoma City tornado killed 36. The NOAA/Severe Storms Lab says that approximately 500 deaths would have occurred if that tornado happened with the same population as we have today, but our protection technologies were the same as in 1925. If we hypothetically transposed this assumption to this entire outbreak that has just occurred, just to give us an idea, about 2,500 people would have been killed. 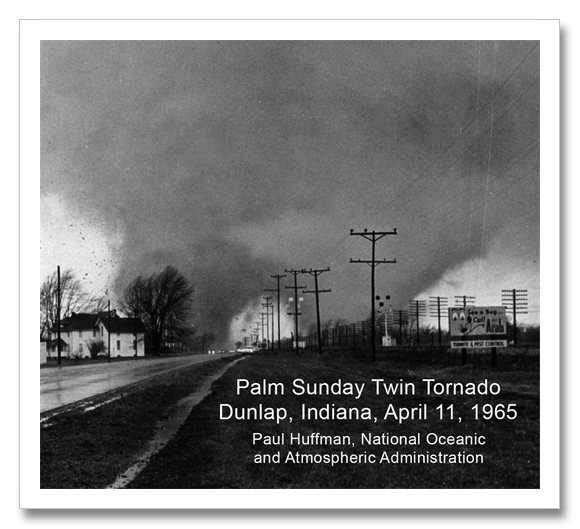 This is by no means an apples to apples comparison, so why am I talking about this? We must understand what the teevee guy is actually saying when he says that this was the worst tornado outbreak since 1936 – or whatever. It can not be argued that hundreds and possibly even thousands of lives were saved during this tornado outbreak because of early warnings and new building codes. It can be argued, because of the apples to oranges comparison, that 2,500 lives were not saved (it may have been more or less because of the differences in the comparison.) It is important that remember that many of the comparisons that the television reports uses (or internet news), simple are not valid. In this case, it just is not possible to compare today to decades or generations ago. We need to be looking at something more comparable like the number of tornadoes.

But tornado reports have increased with the increases in population over the years simply because there are more eyes around to see tornadoes when they occur, or more houses to be damaged, and because of greater tornado awareness and better reporting networks. NOAAs Sever Storms Lab has determined how to “normalize” these increasing reports though, through clever (and complicated) statistical techniques, so that we can equally compare, apples to apples, the number of tornadoes that we have every year – at least back to 1954.

So now we can tell, year to year, what is going on with tornadoes from severe weather. This his is exactly what the climate scientists have been telling us about for over twenty years now. The variability in the extremes of the weather will increase as our climate warms. We will not see this ever year, because the opposite is also true, at least somewhat. this sound strange when talking about tornadoes and their being fewer tornadoes some years because of climate change, but another comparison more clearly demonstrates this increase in weather chaos that has been predicted for so long now.

Extremes flood events have been projected all over the world because of climate change. The opposite of this effect is that extremes in drought will increase with climate change. A great example of this impact comes from the United States Southeast. A team at Duke University has found that over the last sixty years, that the extremes of drought and flood have doubled in the southeastern U.S, and their work has excluded all sources of this change except man-caused climate change. (see here)