Methane Eruption Craters: Lots of Them

Last summer the first of these appeared in the “formerly” frozen tundra of Siberia. When permafrost melts, methane can build up beneath impermeable soils and suddenly erupt. These holes are up to 100 feet wide and seven of them have been identified with many more smaller ones. Four of them have been located and three more are still being tracked down after being identified by reindeer herders. We first reported on them here. 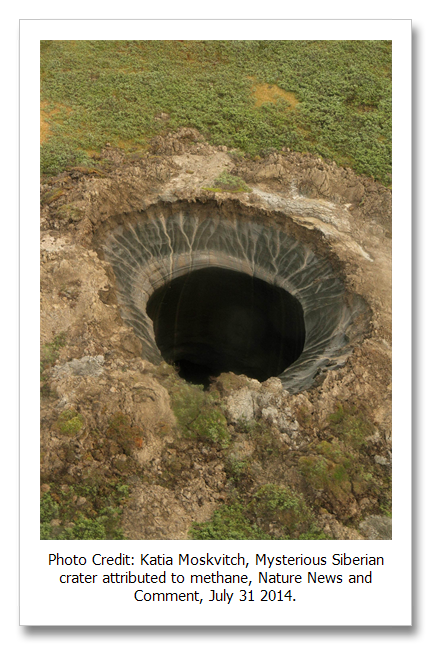 A report in the Siberian times says they are trying not to spread fear about these eruptions but they are dangerous and need to be understood. The Times says:

“It was very risky, because no one could guarantee there would not be new emissions… One of the most interesting objects here is the crater that we mark as B2, located 10 kilometres to the south of Bovanenkovo. On the satellite image you can see that it is one big lake surrounded by more than 20 small craters filled with water. Studying the satellite images we found out that initially there were no craters nor a lake. Some craters appeared, then more. Then, I suppose that the craters filled with water and turned to several lakes, then merged into one large lake, 50 by 100 metres in diameter.”

This Russian Academy of Sciences  researcher says: “I would compare this with mushrooms: when you find one mushroom, be sure there are few more around. I suppose there could be 20 to 30 craters more.”

Gas emissions rom lakes that filled with water are obvious on the surface as large areas where small bubbles turn the surface a milky color.

The Times article goes on to discuss the possibility of an ignition and explosion could have happened with the formation of the crater at Antipayuta, on the Yamal Peninsula. Locals said they saw a flash in the distance.