More and more areas of the ocean are turning up with little oxygen. these anoxic, or "dead zones" are caused natural but organic decay, they are caused by nutrient pollution from stormwater runoff and they are caused by upwelling of deep ocean waters that have naturally lost their oxygen load through a number of different bio and geochemical srthprocesses. Dead Zones are getting worse and worse because of nutrient pollution, but many new dead zones have been discovered that have nothing to do with dead zones. these areas are believed to have been caused by shifting ocean currents – currents that are changing because of climate change. 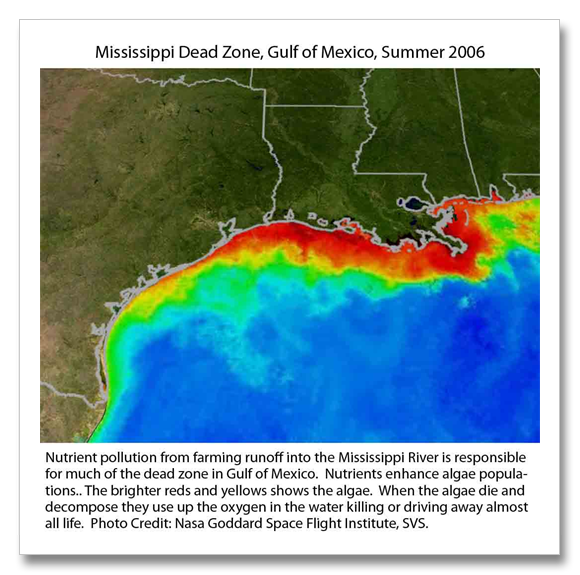 Just to name of few of the reasons that ocean currents change that are caused by climate change; warmer waters tend to sink less than cooler waters. Cooler water is denser and heavier and sinks. Global wind fields are changing because of climate change, storm tracks are shifting north, low pressure areas are becoming more intense, etc. Winds are one of the major drivers of oceans currents. The changing currents, along with the changing water temperatures (warmer water also holds less oxygen) are creating more and bigger dead zones that are definitely not associated with nutrient pollution (see here). Also happening, the warmer waters are creating greater algae blooms more often.

So, obviously, dead zones are a big impact of climate change, one that will only get larger as the planet continues to warm. But this new discovery published in Science tells us that nitrous oxide (N2O) generated in these dead zones may be a very troubling climate feedback. N2O is a greenhouse gas 120 times more potent than CO2and has an atmospheric life of 300 years. it has been increasing at a similar rate to CO2 after being stable for thousands of years before the industrial revolution. The current understanding and use of N2O in climate models is that N2O is produced by land use practices associated with agriculture and deforestation.

This study found that anoxic water found in dead zones create 10,000 times more N2O than comparable waters that have normal levels of oxygen.