How Many Unprecedented Historic Weather Records Have to be Broken for Climate Change to Get Some Respect? The Science of Early Spring

So far in 2012 in Austin we have had bout the same amount of rain than we did in the 12-month period that marked the drought that peaked last summer (the deepest 12-month drought Austin has ever experienced). Scientists have been telling us for decades that climate change is real, that it will cause more extreme weather and that delaying action to control our climate will make the extreme weather more extreme sooner.(1) Climate scientists have now started telling us that indeed, the extreme weather happening recently is being caused by climate changes that have already happened. Because warmer air holds more moisture, and warmer air rises faster, the two together means more rain faster, more tornadoes, bigger winds, more hail, bigger floods, etc. (3,4) In 1975, Wallace Broeker even predicted that by the first decade of the 21st century we would be experiencing higher temperatures than we have experienced during the last 1000 years, and this has indeed happened.(5) Global warming has specifically increased the chance of killer heat waves like the European heat wave of 2003 and the Moscow heat wave of 2010.(6,7) Even small changes in average temperature can significantly increase the chance for drought and heat waves.(8) This is because of the drying feedback – the drier it gets, the hotter it is, creating more drying and increasing the heat even more.  Twice as many record highs have be set in the last decade than record lows. (11)

The following is from Science Live, at Sciencemag.org, the website of the peer review journal Science, a publication of the American Association for the Advancement of Science (AAAS). This session of Science Live was titled “The Science of Early Spring.” The guest commentators in this one hour chat are a couple of phenologists (scientists who study cyclic seas on phenomena like plants flowering, birds migrating and insects breeding) named David Inouye from the University of Maryland and Jake Weltzin, director of the National Phenology Network.

Cherry blossums came up first, blossoming about 2 weeks earlier than normal this extremely warm winter and in fact, dozens of plant species are blooming early in Washington DC.

Phenology is all about timing. Birds migrating at just the right time to catch the swarms of bugs in the spring, insects breaking dormancy at the appropriate time to pollinate those special plants that must have certain insects as their pollinators; and other things like having enough cold weather to stimulate those plants that require an extended dormant period to flower (apples for example).

Spring is getting earlier in the Rockies, but the date of the last average freeze is not. This is happening in many places across the globe. What was once just a normal “false spring,” like happens now and again in our “old climate” is now happening more often and the false springs are getting longer and warmer. Plants are breaking dormancy then getting frozen back where as before, the false spring was not long enough for the plants to break dormancy. What this does is continually stresses these plants and they become weak and diseased and susceptible to ecological replacement by more vigorous or tolerant plants. This changes the composition of the ecosystem that has a ripple effect from the smallest organisms to the largest.

Eight thousand species of plants rely on hummingbirds for pollination. Many of these, especially in the Rockies, are blooming now before the hummingbirds return from their southern migration over the winter.

Apricots and cherries are budding out earlier and their buds are getting frozen off. Caterpillars are coming out early to eat the early leaves then they get frozen to death in the last freeze, setting back the chain of life that relies on these caterpillars. In 2007 there was an event like this in the Rockies that caused $2.2 billion in damages.

The USA National Phenology Network, www.usanpn.org, tracks over 700 species through citizen input. Another place to find information about the changes of plants with the changing seasons is: www.citizenscience.org

There is some evidence that the earliest flowering plants in the Arctic are blooming too early to be pollinated by the main early spring bumble bee pollinators because the bumble bees are simply not emerging early enough.

The fall season may hold really important problems too. Many creatures (like butterflies) use much more energy in early hibernation in the fall–as much as four times more than in deep winter. This is because they go through different types of dormancy and the early dormancy is more energy intensive. It is so much so that one day of energy use in fall dormancy is equal to four days of dormancy energy use in the winter. A late fall may mean curtains for these creatures. If they are butterflies or moths, if the energy use requirements in the fall exceed the normal amount of energy that those creatures evolved with, then they perish.  The nourishment that these larvae produce feed many other creatures and those too may be in peril if other sources of energy (food ) are not available, say because they migrate by day length and warmer temperatures means spring starts much earlier.

In the Rockies they have been tracking the onset of the spring melt for 70 years. This is very reliable indicator of the very beginning of spring. What has been found, all across the Rockies, is spring is coming up to a month earlier than normal. This leaves a lot more summer out there to evaporate water out of the environment. Becuase the West is mostly an arid region, this is not good news. The warm season, especially the hot summer period, can evaporate ten times more (really a lot more than that) water than evaporates in winter. This means drought can persist even with greater than normal rainfall.

So now that I have rattled off a few; a big question arises. Can we blame the changes in this plant phenology on climate change? The answer is yes. The link between plant flowering and temperature is very strong. So if one “believes” in climate science, the answer is “yes.” Likewise, species migrations are linked as well. When the American robin’s wintering grounds experience early spring and they fly north and there is still five feet of snow on the ground in their summering grounds in the Rockies, something is amiss. That something is early warming and again, belief in climate science points the finger at climate change.

From the Guardian in the U.K.: 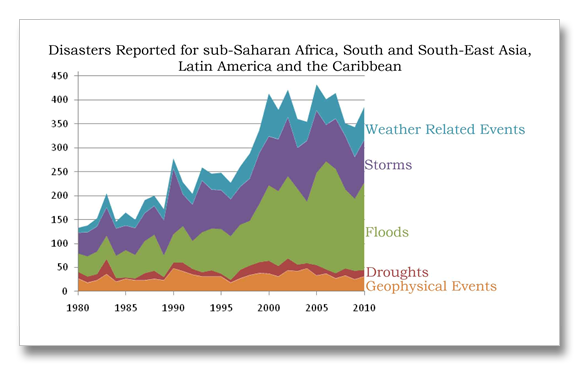 “Drought zones have been declared across much of England and Wales, yet Scotland has just registered its wettest-ever May. The warmest British spring in 100 years followed one of the coldest UK winters in 300 years. June in London has been colder than March. February was warm enough to strip on Snowdon, but last Saturday it snowed there. Last year, more than 2million sq km of eastern Europe and Russia scorched. An extra 50,000 people died as temperatures stayed more than 6C above normal for many weeks, crops were devastated and hunderds of giant wild fires broke out. The price of wheat and other foods rose as two thirds of the continent experienced its hottest summer in around 500 years. In Queeensland, Australia, an area the size of Germany and France was flooded in December and January in what was called the country’s “worst natural disaster”. It cost the economy up to A$30bn (£19.5bn) In China, a “once-in-a-100-years” drought in southern and central regions has this year dried up hundreds of reservoirs, rivers and water courses.”

Oxfam reported that while the number of “geo-physical” disasters (such as earthquakes and volcanic eruptions) has remained more or less constant, those caused by flooding and storms have increased from around 133 a year in 1980s to more than 350 a year now.(10) The Executive summary of this reports states: “There is an upwards trend in the number of reported disasters. This is chiefly driven by a steep rise in reported floods in all regions and, to a lesser extent, storms in Africa and the Americas. When weather-related disasters are analyzed separately, the average rate of increase is 4.1 per cent per year for the sample of countries which have a first disaster reported from 1980 (a rise of 233 per cent over 30 years), and 4.9 per cent per year for countries whose first report was from 1990 or before (159 per cent over 20 years). The rise in the number of reported disasters, and of floods in particular, is broadly supported by independent data.”

All total, 133 disasters were reported in 1980, whereas in recent years it has become the norm for over 350 disasters to be reported annually. Yet not all types of disaster are increasingly reported: the number of geophysical events and droughts has remained more or less stable over time, while there has been a sharp increase in the number of reported floods and storms and, to a lesser extent, in the number of other weather-related events such as wildfires and extreme temperatures.”

Swiss Re, which last month estimated losses from natural disasters have risen from about $25billion a year in the 1980s to $130 billion a year today

Munich Re also shows undeniable increase in the trend of losses. One note about these insurer statistics too. This is the most rock solid of conservative economic evaluations that you will find. When the insurance companies are telling us that natural disasters are increasing and it’s not the population, it’s a sure thing. (11)

5) Broeker, Climate Change: Are We on the Brink of a Pronounced Global Warming?, Science, 1975.