NASA Says No Change in Rate of Warming

In their Current GISS Global Surface Temperature Analysis, NASA finds that the there has been no reduction in the global warming trend of 0.15-0.20°C/decade that began in the late 1970s. The cold winter we have just had  was nothing to the extra warm Arctic winter and the extra warm southern hemisphere. The results are that we will likely set a global high temperature record this year. 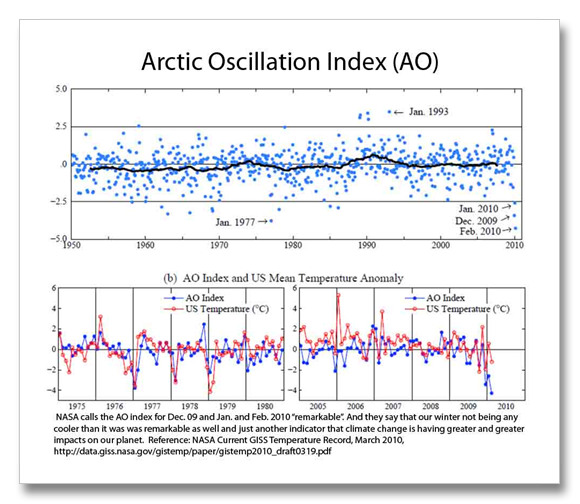 NASA says that because public opinion about climate is affected by recent weather and that the cool summer of 2009 contributed the increasing skepticism about climate change in the U.S. (This is particularly ironic as much of Texas had its warmest summer season ever recorded).  NASA goes on to say that 2009 was the second warmest year ever and 2005 was the warmest year ever – both support the overall warming trend that NASA has reaffirmed.

NASA also says that there are numerous natural cycles occurring right now that makes the continues  warming trend particularly extreme.  The largest sunspot minimum in a hundred years is one and the Arctic Oscillation Indexes another. The Arctic Oscillation Index is a measurement of the difference in intensity of polar vs. middle latitude weather systems.  When the AO is negative, we have cold weather in the northern Hemisphere, the differences in the weather system intensities allows cold air to penetrate further south.