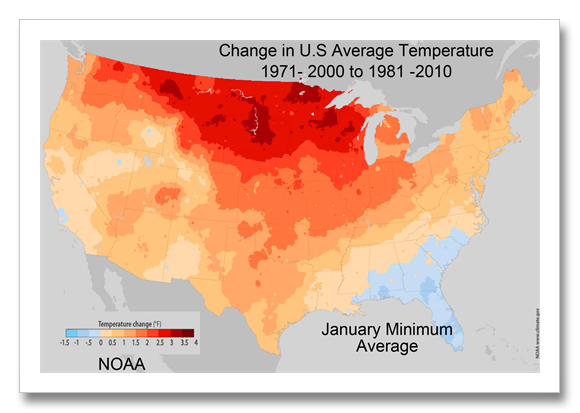 How much, it could not be that much, could it?  the image from NOAA below shows exactly how much warmer the minimum January temperature is across the nation in the thirty years averaged 1981 to 2010 vs. 1971 to 2000. In the Northern tier of states the average “normal” temperature is now about 3 degrees warmer.  In Austin, when I heard about this news on the second of August, the television weatherman told us that the old normal high temperature for August second was 95 and the new normal temperature for August 2 was 98. How fair is that? We are having one hellofa time trying to convince the public how significant just a few degrees of warming is and the national Weather Service goes and changes the goal post by three degrees! What the hell are they thinking? This is NOT normal, this is outrageous! Just because we have been doing this for a hundred however many years does not mean that we should continue to do so. NOAA and the National Weather Service should change to meet the demands of the 21st century.