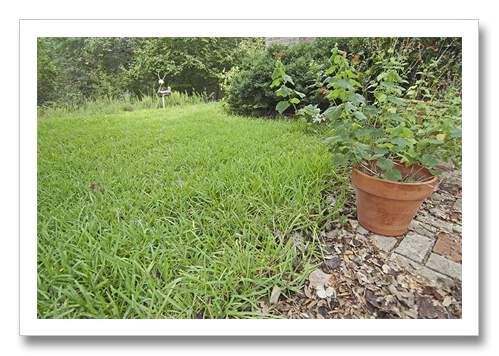 Waste, waste, waste. Through blind luck, sheer madness or backwards genius process, I have stumbled upon a landscaping technique that saves an enormous amount of water.  Our Highland Lakes here in Central Texas are just a bit more than 30% full and even 5 to 7 inches of rain in the contributing watershed does not make a difference.

Rainfall in the watershed that contributes to the our Highland Lakes has increased 9 to 17 percent since the great drought of the 1950s—Increased, not decreased with the drought. While curiously, inflows to the lakes are 50 percent less than they were in that 1950s drought of record-again, with INCREASED rainfall. All the while, water releases from the lakes have stayed the same.

What?! finding out that rainfall has increased with lake levels almost identical to the Drought of the 1950s is a big enough leap, but “releases are the same as 60 years ago??? How could releases have stayed the same with the region’s population skyrocketing?

It’s quite simple. Back in the 1950s the Lower Colorado River Authority, that built and operates the lakes, released a tremendous amount of water to generate electricity for the region. In the 1970s all of this stopped as electricity demand grew and LCRA built coal and natural gas fired power plants. Since the late 1970s and early 1980s the LCRA has not released any water solely to make electricity.

So just a little warming has created an incredible amount of evaporation and it is not just evaporation from the lakes. Plants need more water when it is warmer. The growing season is longer and some plants are not going dormant in winter allowing more water to be sucked out of the ground. Rainfall events are getting heavier but farther apart, creating longer dry spells that allow deeper evaporation that soaks up more water when it does rain.

We are stuck with this climate and it will only get worse. We have the capacity to easily and cheaply fix climate pollution, but it will take a little while and our leaders that do have a clue are still operating under Kyoto Era climate concepts.

New ideas are needed, and I have one! It’s about lawn maintenance, and it extends into the vegetable garden as well. But first a word about plant selection. We all have preferences for the plants we would like to see in our yards but the desert has other things in mind. There may be a place for a small amount of our cherished water loving plants in our landscapes, but only a tiny amount. My postage stamp St. Augustine lawn is an example. It is about 3,000 square feet and it dwindles every summer in places where I realize it is no longer needed.

The rest of my yard is full of native plant gardens that only require watering in the very worst of drought times. The summer of 2011, I watered a few of my most prized natives twice. That summer saw 90 days of 100 degree plus heat where 11 to 12 is our 20th century normal.

Conventional water conservation wisdom says to water deeply and seldomly. Using this practice, historically in drought periods I used about 10,000 to 12,000 gallons of water each month through the extreme part of summer when temps are above the mid 90s. Extreme summer here in Austin begins in early May and ends in late September. This summer my peak monthly usage was 7,500 gallons. We had four times the normal 20th century number of 100 degree days and at my house, similar rainfall to the record smashing 2011 part of this drought.

Since the 2008 spike of our current drought (that began in 2005), I have been relying on more and more hand watering to supplement my sprinklers (I still drag hoses all around and have no sprinkler system). I knew this was not a good landscaping maintenance practice because shallow watering promotes shallow roots that fry in the extreme heat. Yet I persisted because drought watering restrictions made it difficult to get all of the watering done via hose dragging that I thought needed to be done in the allotted time.

When I inherited a new lawnmower to replace my vintage 1950s Craftsman that finally gave up the ghost, I also inherited an extra inch and a half of lawnmower height. I went from less than four inches to five inches. This is a really tall mowing height and when you are not accustomed to it, it seems as if it needs mowed again the moment you stop mowing. But a higher grass height allows the grass to provide itself with more shade—so they say.

This year I only watered with the sprinklers once. The rest of the time I stood in the yard and watered by hand. It doesn’t take long. More than half of the yard has a high canopy from live oak trees and under the canopy it needs only about 25% of the water needed in direct sun.

It takes about 20 minutes every other day or maybe every third or fourth day depending on how few clouds there are and if it’s over 100 or not. I water about one third of the yard at a time. Sunny spots get watered two or three times more often than shady spots.

As this drought has increased, I have found myself mowing less and less. I only water when the grass is threatening to spontaneously combust. This watering technique obviously doesn’t provide a lot of extra water for extra growth. This year I have only mowed twice and the yard looks great. My neighbor across the street has a fair bit more St. Augustine than I do and a sprinkler system and almost as much landscaping as I have (a very large amount). Only, her plants are all roses and non-natives that suck water like a toad. She told me the summer of 2011 that her high water bill was over $500. Mine was $90.

I have another trick that may have something to do with how I can get away with whatever it is that I am getting away with. I treated my yard religiously with organic fertilizing techniques beginning when we moved here in 1990. As time went by the yard survived numerous attacks by lawn predators and diseases like chinch bugs and take-all. One of the benefits of organically building soil like this is that eventually, a self-sustaining ecosystem is created. This is exactly what has happened at my house. I haven’t fertilized in five years.

So conventional wisdom may have worked in semi-arid regions in our old climate, but it is horribly wasteful in our new climate. Grow native plants. Instead of grass in the sun, use rocks and leaves. It’s ok, just keep the weeds down—it does not take long to weed. Try using techniques in your yard that promote sustainability. Significantly limit the use of water loving plants. Plant drought tolerant trees and keep your water loving lawn in the shade of these trees. And limit the amount of water loving lawn to a small enough amount that you can water it by hand with a hose, it doesn’t take long for an area as big as a large house if you have some trees.