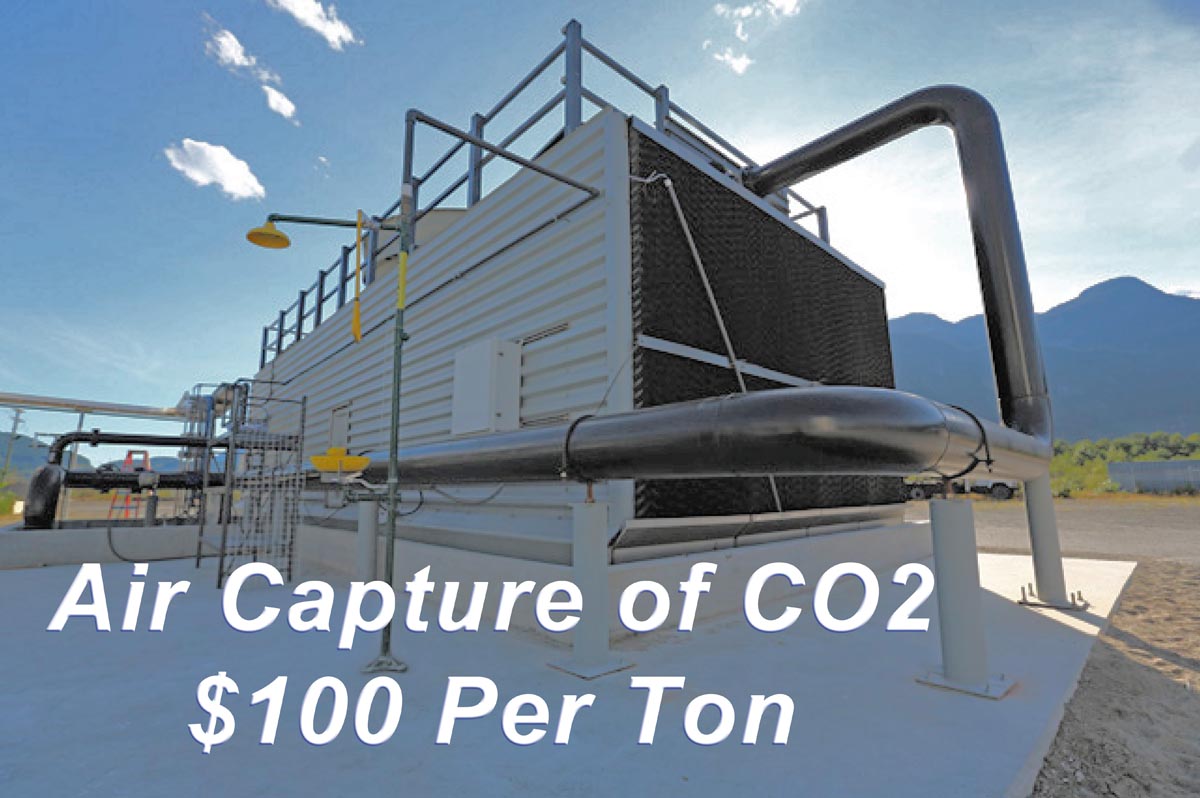 The folks at Carbon Engineering in Squamish, British Columbia have been working on their process since 2009. Normally, this type of proprietary process remains concealed because of the vast possibility of massive revenue generation. In a bold move, Carbon Engineering has released their process in the journal Joule in a paper lead by David Keith of Harvard University.

Using natural gas for electricity to power the process, their costs have fallen to $94 a ton CO2 for a 1 million ton per year pilot facility. All of the CO2 is captured from the natural gas which increase the CO2 available at the end of the process to 1.46 million tons per year.

Here’s a quote from the journal Nature and an interview they did with Keith: “Carbon Engineering says that it published the paper to advance discussions about the cost and potential of the technology. ‘We’re really trying to commercialize direct air capture in a serious way, and to do that, you have to have everybody in the supply chain on board’.”

The process uses lye to capture CO2, then the CO2 is transferred to calcium carbonate pellets (limestone), then the CO2 is removed from the limestone to allow it to be used to create synthetic fuels, or plastics, fertilizers, the fizz in Coke; lots of things that we need and use every day. It can be used to produce synthetic limestone in the form of construction aggregates and we use of 50 gigatons of construction aggregates every year. When we run out of places to use it we can rebuild mountain tops, or build new mountains even. Blue Planet says that using their synthetic aggregate technology  (in non peer review,) the cost is a few dollars per ton CO2.

One of the easily recognizable off the shelf parts of the Carbon Engineering process is the Kraft pulp process which is used to convert the extra CO2 in their limestone pellets to free CO2.

Keith says the process is still not as cheap as conventional fuels but would add about $0.22 per liter to the cost of gasoline. This is the cost today, with their fledgling industrial scale process and it will undoubtedly fall dramatically as the process continues to be refined and scaled. It’s also important to note that Carbon Engineering’s process was first used to keep our sailors safe from CO2 poisoning in submarines during World War II. There are many other direct air capture processes being developed today that are likely more efficient.

Now, what about those climate scientists that say cost efficient CO2 capture from the atmosphere is a dream? This is largely the American Physical Society and Massachusetts Institute of Technology (MIT) crowd that still hangs on the hypothetical work of these two eminent authorities that showed the costs to be at the minimum $550 a ton CO2. Well, hypothetical evaluation is sometimes wrong and there were many reasons why APS and MIT were wrong, but this is how science works. We hypothesize, test and then reevaluate our hypothesis.

Today we not only have pilot facilities doing atmospheric CO2 capture for far less than what APS and MIT hypothesized, but these costs are for extraction today using Carbon Engineering’s fledgling process. In the future, as energy costs dive, and as the process is scaled up to sizes that can actually make a difference with atmospheric CO2, costs will continue to plummet. We saw it with wind energy, and now solar, and even batteries are far out performing previous hypothetical projections.

This scaling thing too is very important and can be related to the costs drops of many other things we do in our society every day from Henry’s Fords to Job’s Apples. The scale that Carbon Engineering is removing CO2 from the sky today is 1 million tons per year. To make a difference in warming, to reduce warming instead of allowing additional warming with only emissions reductions, we need to remove from 50 to 100 billion tons (gigatons) of CO2 from the sky every year for 20 or 30 years. Along with continued emissions reductions and eventual complete decarbonization of our energy infrastructure, if we can accomplish this seemingly Herculean feat, we can reduce Earth’s temperature to near normal by mid-century. Hopefully, this return to a safe climate time frame will also reverse abrupt changes that have already been initiated (collapse the West Antarctic Ice Sheet, shut down of the Gulf Stream, collapse of the Amazon, abrupt permafrost melt, etc.)

The scaling required then is 1 million tons per year to 50 to 100 billion tons per year. This is somewhere between 50,000 to 100,000 times more than today — a truly fantastic number. But it’s fantastic only in the sense of its grandeur. Globally we made over 70 million cars in 2016.

Yes you say, but it took us nearly a hundred years to ramp up from zero cars per year to 70 million. This is very true, but what can we do if we are motivated beyond profit and standard of living? What can we do say, in the worst-case scenario, of world war?

During World War II, we spent $11 trillion dollars in four or five years on industrial expansion and mostly heavy manufacturing. This was 73 percent of global GDP.

At $200 ton CO2 removal, 50 ppm atmospheric CO2 removal costs $20 trillion. (Hansen, Target Atmosphere 350, 2008, paragraph 1, page 227) Seventy-three percent of five years of global GDP today at $78 trillion per year is $285 trillion. We need to remove +/- 100 ppm CO2 to return our climate to a healthy state, which is $40 trillion at Hansen’s $20 trillion per 50 ppm. At $100 per ton the total bill is $20 trillion., or less than 10 percent of what we spent during World War II. The real number as stated by much additional research, is likely around the low tens of dollars per ton. Total costs then would be in the low trillions of dollars.  Either way, it’s a small fraction of what we are capable of as shown by history.

We spend $3.5 trillion in the U.S. every year on health care. We spend a half trillion every year across the planet on advertising. Sure we can do this. All we need to do is become motivated.