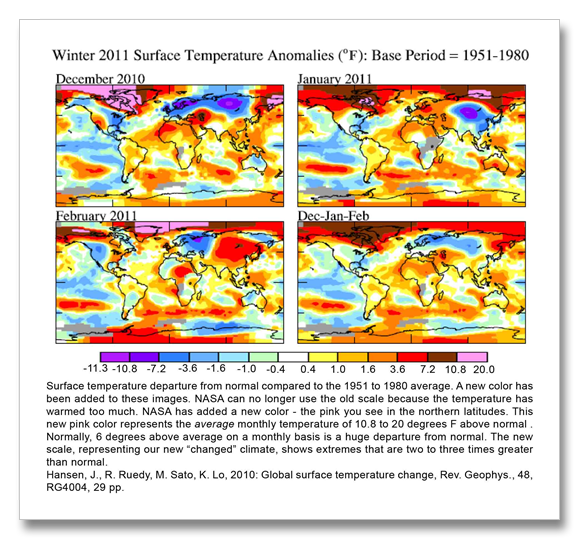 The earth warms and NASA quietly adds a new color to their legend to accommodate the change. No fanfare, no press release. The skeptical denialists did not even dispute the action. What does it mean?

Think of your computer back in the 1990s. Remember how big that first upgrade to a 40 megabyte hard drive was?  Then it was a 400 meg drive, then a one gig drive.  Now we have hard drives for the home computer that can store two terabytes of information. As storage capacity rose, different words were brought into use to describe the increased capacity: Megabyte – gigabyte – terabyte . . . So now, NASA has added a new color to represent the increased temperatures that we are now recording across this planet.  The old scale stopped at 10.8 degrees as the highest monthly average departure from normal. The new pink category maxes out at 20 degrees above normal for the average monthly temperature.  The new increased maximum average temperature category gets this new pink color.

We have reached a point in climate change where every decade to come will be the hottest decade ever recorded. Changes have really started to kick in now, the models have been predicting it for twenty years and they are saying that it will get worse faster. Normal climate variation is no longer relevant. Warming is now more than the natural variation. The climate scientists say that the warming has risen above the noise. What they mean is the changes have statistically warmed beyond their past limits. Most suggestions that they are a part of a natural cycle are no longer mathematically valid.

There will be fluctuations in temperature, but there will no longer be a decade that is cooler than the last. They will all be hotter. At least they will all be hotter until we start reducing the carbon loading in our atmosphere – a task that our politicians have made us believe we have already started when in fact, we are rapidly continuing to increase the carbon loading of our atmosphere.

The image "Winter 2011 Surface Temperature Anomalies . . . " (above) shows us NASA’s new color across parts of the Arctic. It was so warm in the Hudson Bay area of Canada that ice did not form until mid January, a full two months later than normal (see here.) 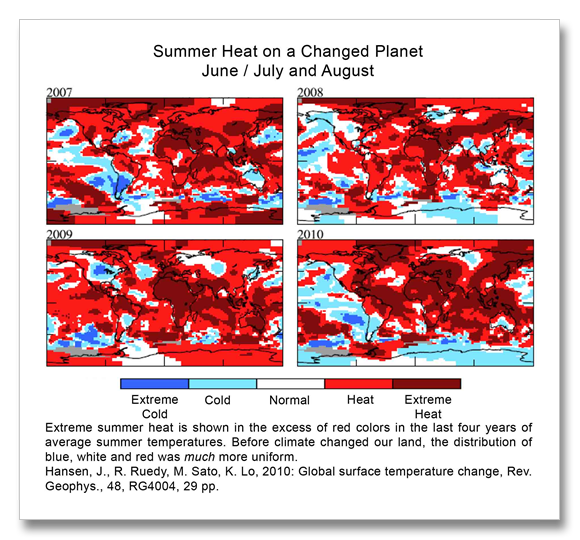 The image "Summer Heat on a Changed Planet", also from Hansen (2010) should be showing a relatively equal distribution of red, white and blue, at least before the warming. Of course, some year to year variance will always occur with a chaotic climate system. Even a decade or more of warmer than normal or colder than normal temperature is not out of the question under a stable climate. The obvious elephant in the room however is that our climate models have been projecting, or forecasting, this warming since the 1980s.

It is not hard to imagine these days that the global temperature was the warmest ever last year. Well, maybe in parts of the northeast and parts of Europe. The cooler than normal winters in these regions however have not been unprecedented and cooler than normal seasons, regionally, are still within the range of weather chaos that remains on our planet. Warming has only been between one and two degrees F.

The cooler than normal temperatures and especially the greater than normal snowfalls, where in the United Kingdom, there has been record snows, are another thing that has been evaluated in the scholarly journals. A warmer than normal Arctic has changed the storm track – pushed the jet stream further south, so that even though the Arctic is warmer than ever in recorded history, it is still very cold compared to Europe and the northeastern U.S. The altered jet stream is now able to pull down arctic storms into lower latitudes where they are dumping great amounts of snow. These bigger snowstorms are because – on a warmer planet, our storms become more energetic. (see here)