Permafrost Carbon Flux: Much More Dangerous Than it Sounds

Permafrost in the Arctic is melting fast. This paper by scientists from the National Snow and Ice Data Center and NOAA published a paper in February has some wild news. Where was the media in February? You know the sensationalistic alarmist ones? Me thinks that Murdoch has been talking to them, he owns many of them you know. If he did not, they would have been on this story like a duck on a June bug. BTW, we had our first June bugs in March  in Austin this year. Another sensational piece of news that the media missed. 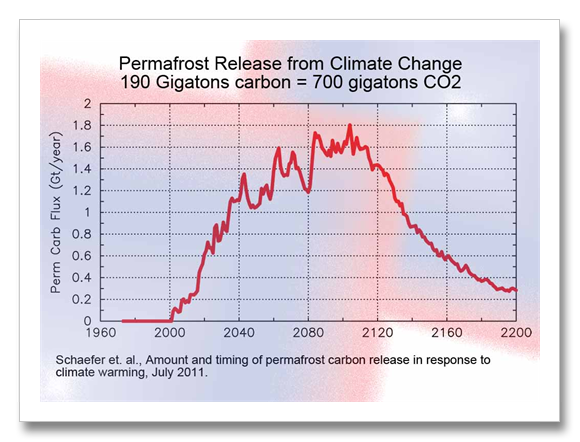 Dr. Schaefer and his colleagues have found that an astonishing amount of carbon will be released from permafrost in the next 190 years. “The amount of carbon released is equivalent to half the amount of carbon that has been released into the atmosphere since the dawn of the industrial age,” said NSIDC scientist Kevin Schaefer. “That is a lot of carbon.” The NSIDC press release says that between 29–59 percent of the permafrost will disappear by 2200. This permafrost took tens of thousands of years to form, but will melt in less than 200. The rate of greenhouse gas release right now is extremely fast as can be seen by the really steep part of the curve. The authors say that by 2020 the release will completely cancel out the Arctic carbon sink and half of the rest of the global land sink.

There is widespread permafrost degradation across the northern hemisphere with permafrost at depths up to 65 feet warming by 4 to 5 degrees F. This is a big deal.

Now the bad news. These scientists use the A1B scenario to evaluate this potential huge increase in greenhouse gases. The A1B scenario of course is the middle of the road scenario. We are currently on the path of the worst-case scenario of greenhouse gas emissions. Dr. Schafer did tell me that for the Fifth IPCC report, due out in 2013, they would be evaluating the worst-case scenario for permafrost melt greenhouse gas release. And of course there is always more bad news. Dr. Schaefer also said their analysis also assumed that most of the greenhouse gases emitted by the melting permafrost would be carbon dioxide when in reality half or more would most  likely be methane. Methane, for a long time, has been understood to warm 25 times more than CO2, but the latest science says that methane has the potential to warm 32 times more than CO2.

From NSIDC:  "Permafrost covers 25 percent of the ground in the Northern Hemisphere, mostly above the Arctic Circle. Permafrost is ground that has stayed frozen for at least two years in a row, and often for many hundreds or even thousands of years. Harder to monitor than snow and ice on the surface, it also hides many secrets. The permafrost contains a large amount of vegetation, primarily partially decayed plant roots, that has remained frozen in a thick layer near the surface since the last ice age. Locked in this layer are some 1,672 gigatons of carbon from the decayed vegetation, more than twice the amount of carbon currently in the atmosphere. Like broccoli in the freezer, it is stable as long as it remains frozen, but when removed from the freezer, will quickly thaw and break down. Scientists have long been watching and measuring permafrost, which is difficult because of its extent and remoteness. Satellites do not easily detect frozen ground, so laborious field studies have been used to study and inventory permafrost. Scientists do not expect permafrost to thaw steadily, but instead to thaw and periodically refreeze, making it harder to plot out how it would release its carbon over time. Based on what they had learned about permafrost thawing, Schaefer and team were able to set up a computer model that combined temperature trends and other data to estimate how permafrost would thaw and release carbon in the future. The study concluded that one- to two-thirds of Earth’s permafrost will disappear by the year 2200, releasing an amount of carbon equivalent to half the amount of carbon that has been released into the atmosphere since the dawn of the industrial age. Even at the lower end of the estimates, the amount of carbon released is expected to produce significant additional atmospheric warming. While not good news for the Earth, this knowledge helps more accurately gauge where global climate is headed." Schaefer, K., T. Zhang, L. Bruhwiler, A. P. Barrett. 2011. Amount and timing of permafrost carbon release in response to climate warming. Tellus, doi:10.1111/j.1600-0889.2011.00527.x