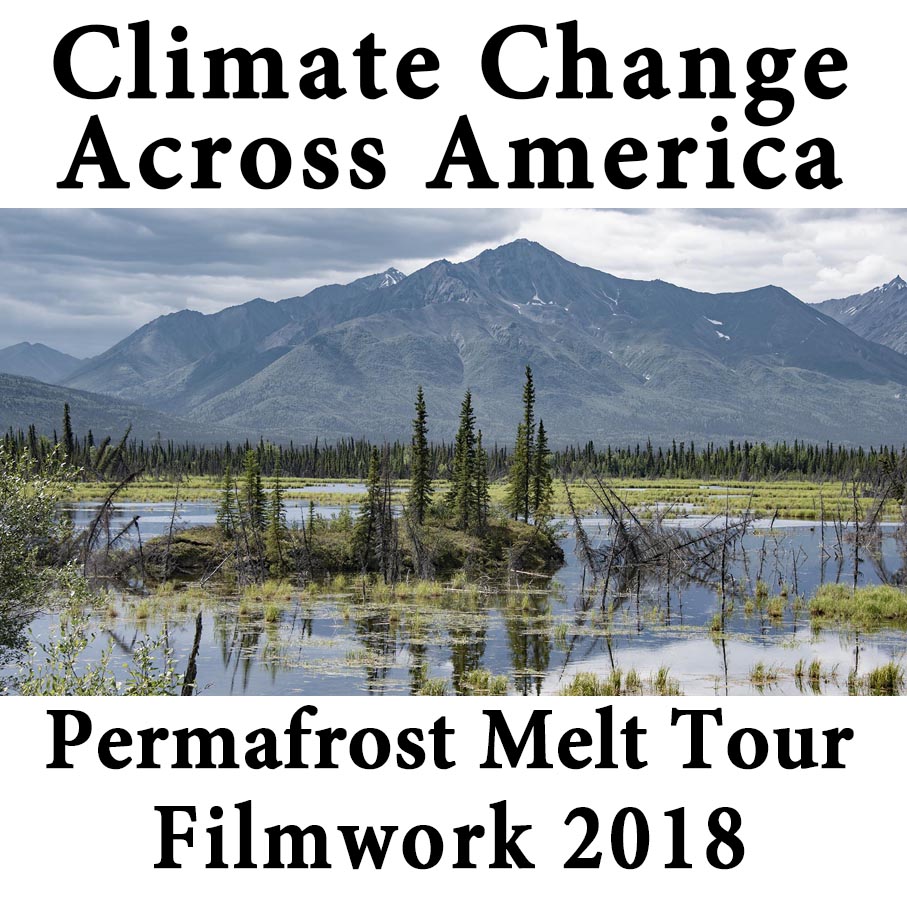 Already, Alaska has flipped from a carbon sink to a carbon source from permafrost melt and methane emissions. (Commane 2017, science interpreted) Alaska — the entire state, and likely the rest of the north across the entire world —  is now emitting greenhouse gases instead of absorbing them as in our old climate. This is a climate change feedback that will continue to grow as we warm further, and it increases nonlinearly, like an avalanche. Here’s why:

The physical property of “heat of fusion” requires 80 times more heat to change ice at 32 degrees to water at 33 degrees than it does to change ice or water the same one degree.  This means that an enormous amount of heat has already gone into permafrost ice to allow it to begin melting. No amount of future emissions reductions will retrieve that heat. Only cooling from today’s level will mitigate and then only a temperature at or near preindustrial will allow our frozen soils of the North to return to equilibrium.

When I filmed permafrost melt in Alaska in 2007, I had to ask the ice scientists at University of Fairbanks where the permafrost melt was because I couldn’t find it. The literature said it was there and it was getting pretty bad, but it was not in plain site. Of course the scientists new where to point me and there it was, pretty bad. Last year was a vastly different story.

Permafrost melt was common. In some places in southeast Alaska, Southern Yukon and far northern British Columbia, it seemed like it lined the roads for miles and miles. 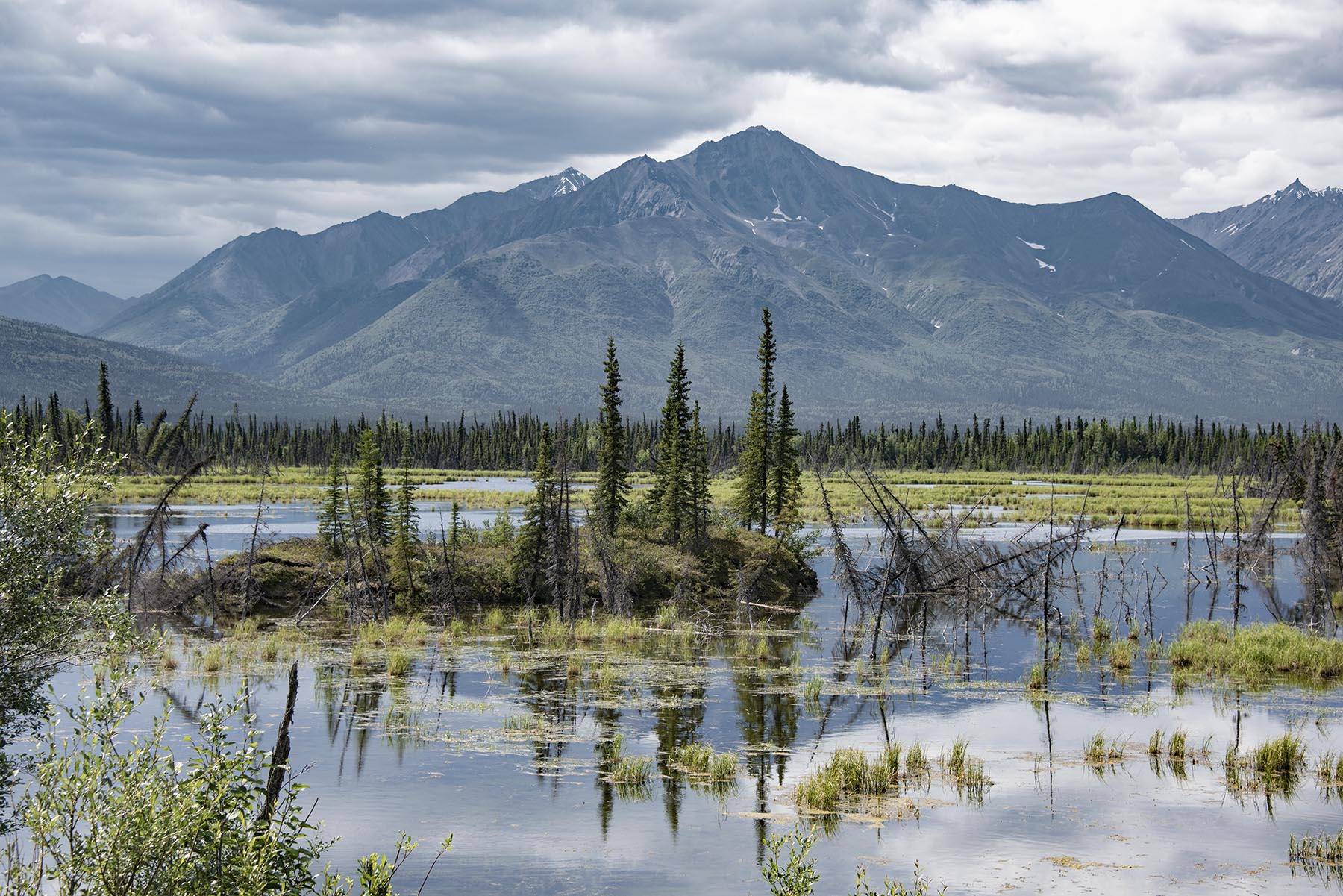 Glenn Highway, Southeast Alaska — This is all, or almost all permafrost melt. Flats like theses are usually underlain with permafrost. Every warm season the top few inches to few feet melt and create conditions boggy enough that trees will not grow, only grasses and bog plants. It’s only on areas that are slightly elevated and can drain that trees will grow. Because permafrost soils are mostly water, as melt extends beyond historic warm season levels, rooted plants on the surface are submerged.  The grasses and bog plants can continue to grow, literally until they are submerged. 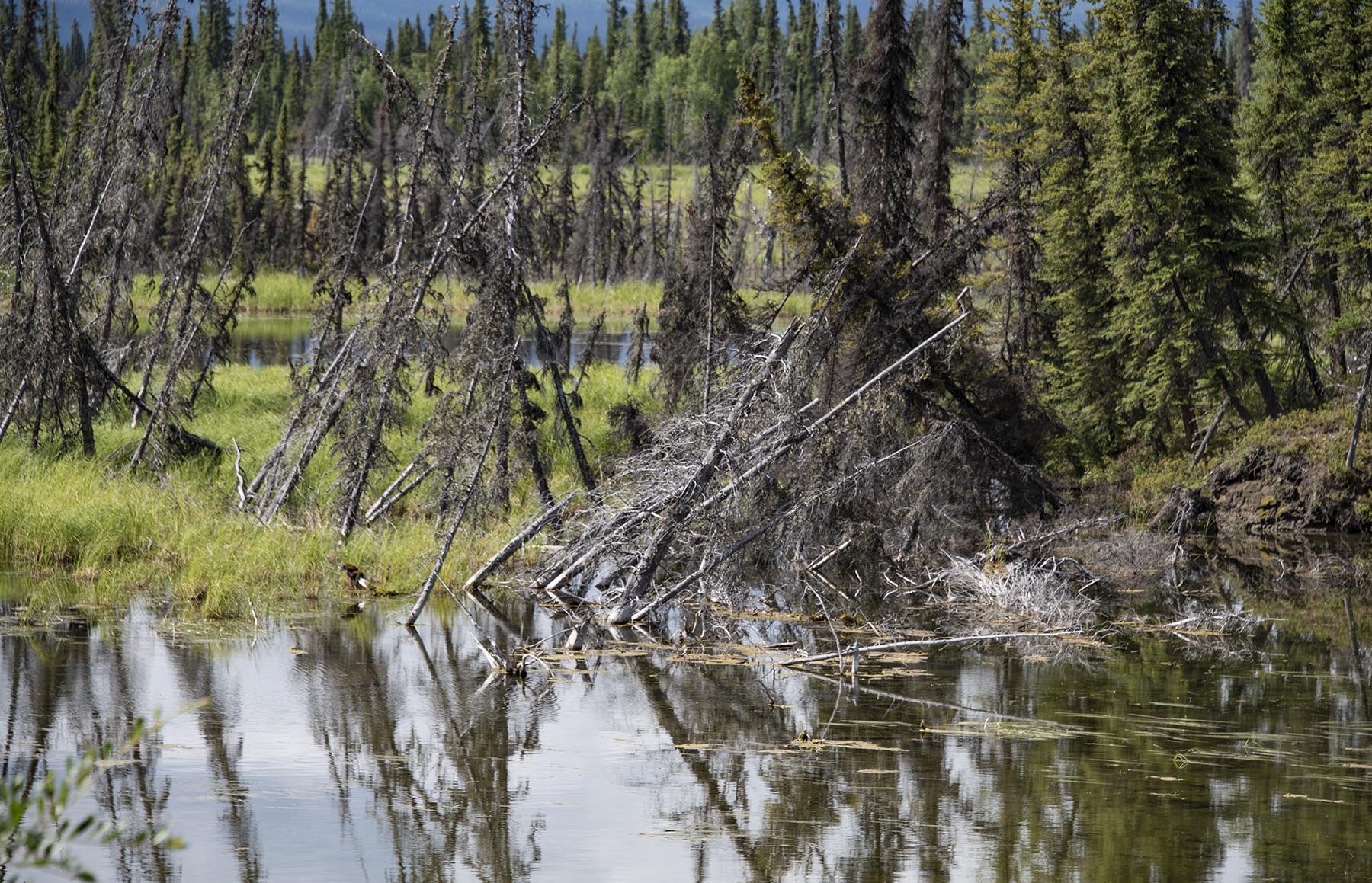 Glenn Highway, Southeast Alaska — You can tell most permafrost melt lakes by the partially submerged trees. But, we cannot see the trees that are completely submerged. The melt process is a feedback process where water absorbs more heat than the original overlying grasses and trees. Once the melt begins, the warm water literally eats a hole in the permafrost. Anything can start the melt: a forest fire, a fallen tree, road construction, or simple a little bit warmer exposure that soaks up more heat than a place that’s not quite so warm. Once the melt threshold is past, once the 80 times more heat requirement of the heat of fusion is met, runaway melt begins. 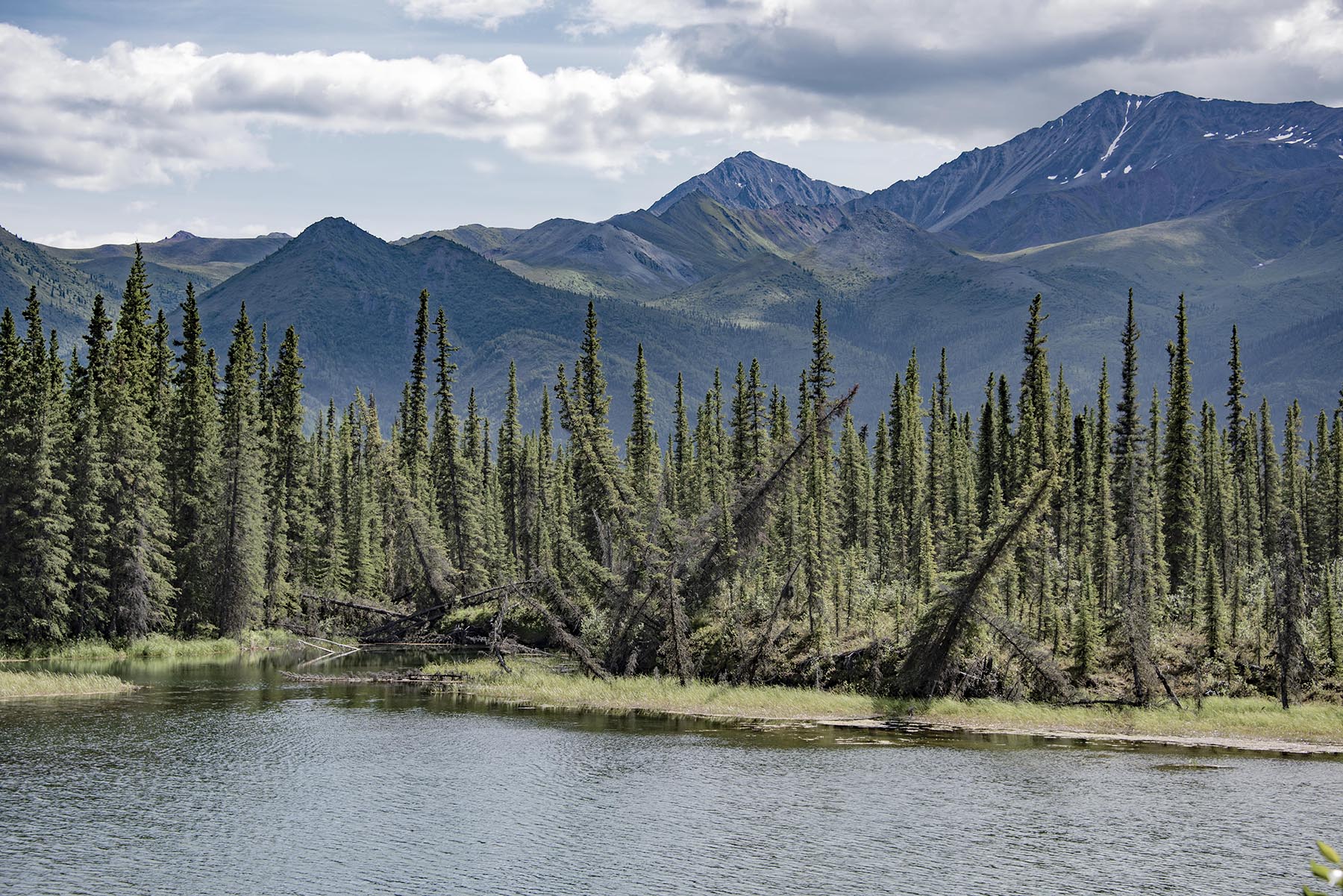 Glenn Highway, Southeast Alaska — Permafrost covers 85 percent of Alaska, and can be over a half mile thick to the north of the Brooks Range on the North Slope. It covers 60 percent of Russia and can be nearly 5,000 feet thick in Siberia. 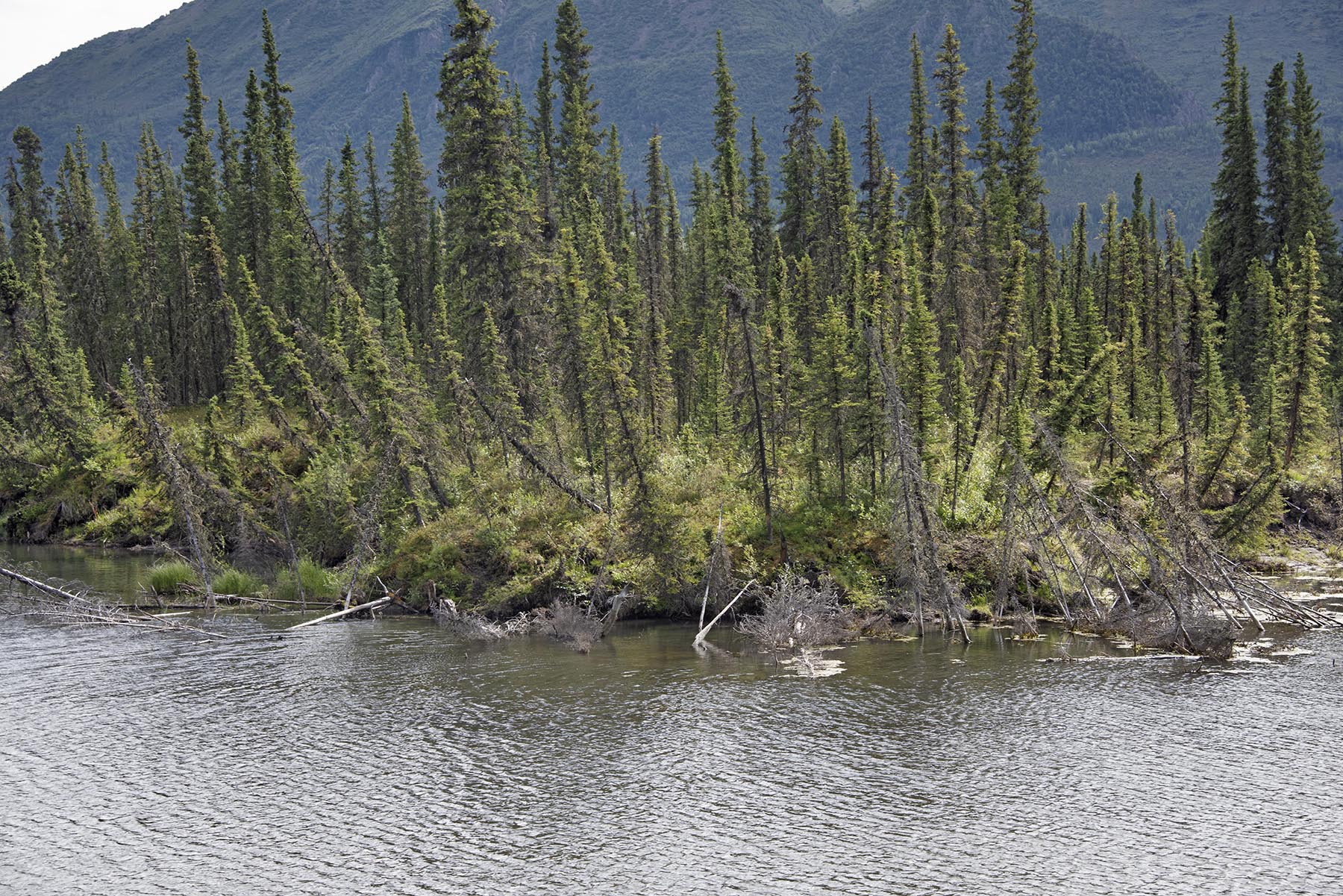 Glenn Highway, Southeast Alaska — We drove most of all the major roads in Alaska this trip (there are not many of them) and saw permafrost melt everywhere we went, but it was mostly located in the southeast, east central and northeast. There are no roads in the western and northwestern two-thirds of Alaska. We only spent parts of two days on the North Slope and the rain and fog prevented all observation. 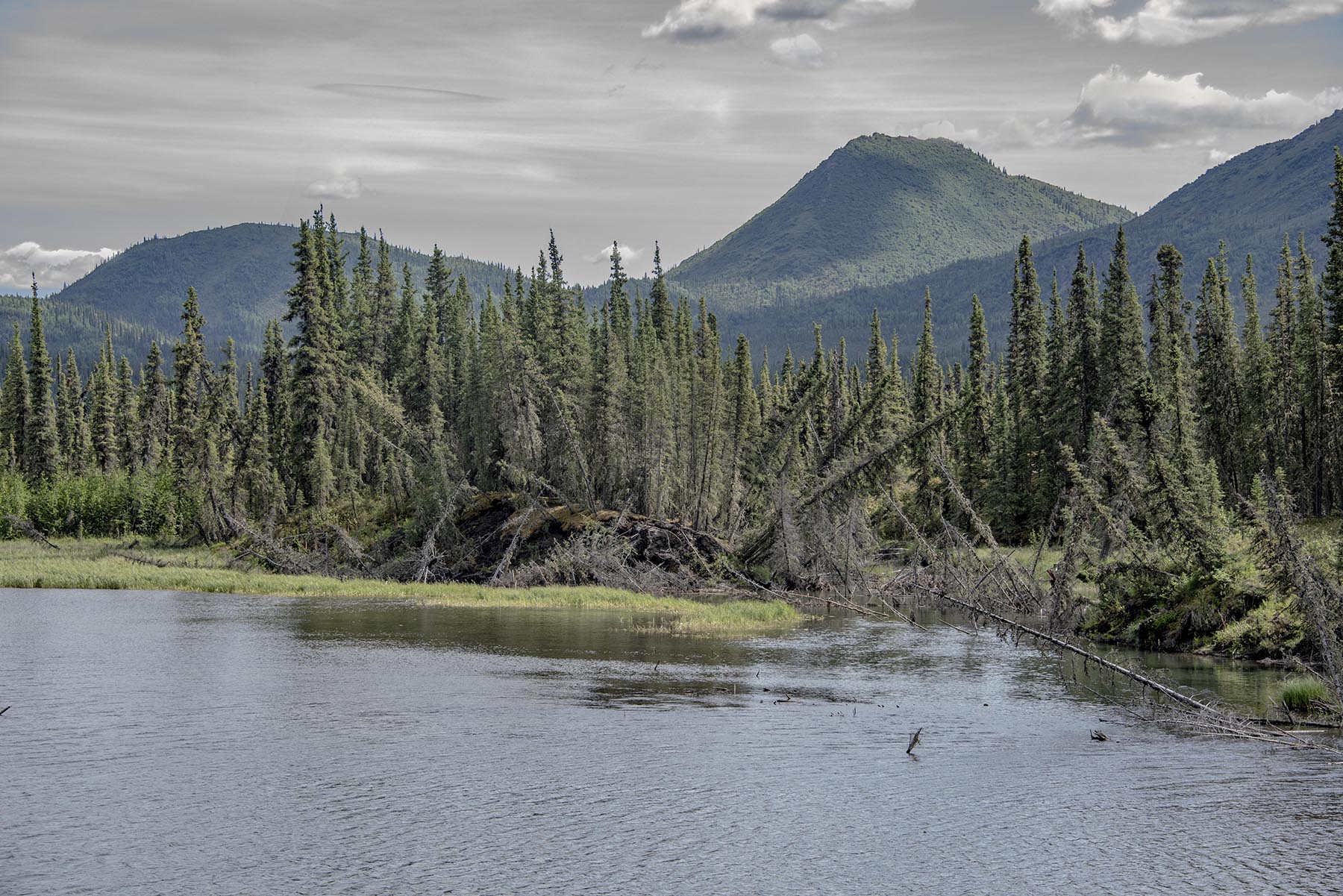 Glenn Highway, Southeast Alaska — This stretch of the Glenn Highway has a nearly continuous area of permafrost melt that ran for about 45 miles. The road was so uneven, even though it was continuously being patched and rebuilt, it was like a roller coaster. 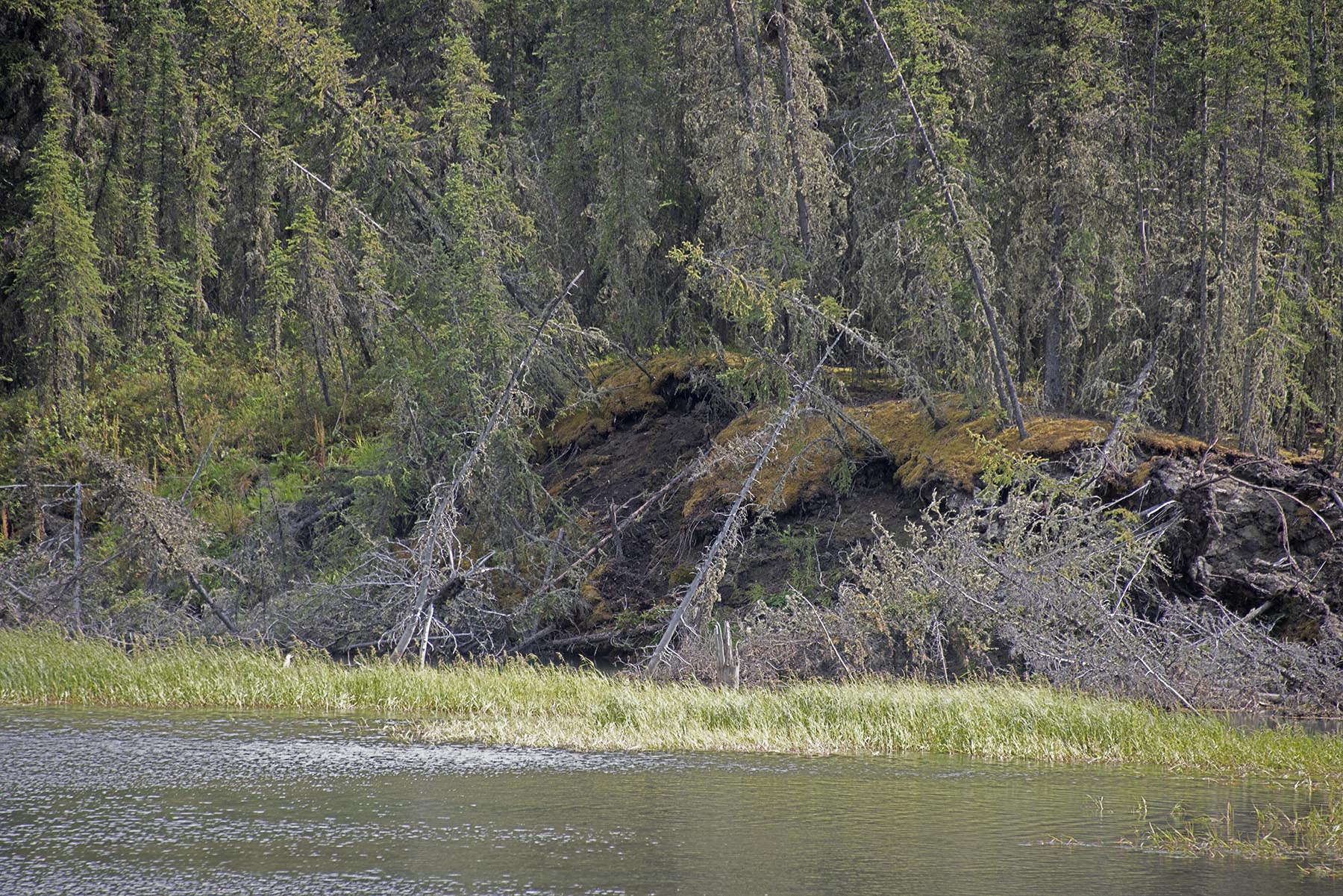 Glenn Highway, Southeast Alaska — Permafrost isn’t just frozen ground. Much of permafrost is mostly ice. Every year the summer thaw creates an “active layer” where trees and other rooted plants can grow. Frozen ground across most of the far north is different that in the south. It’s largely layer upon layer of mosses that never completely decompose before the become permafrost. Every year the top little bit thaws, but only on the very surface. Those old partially decomposed mosses and other organic plant pieces deeper down that don’t thaw every year are what  makes up the permafrost, and where all the methane comes from. 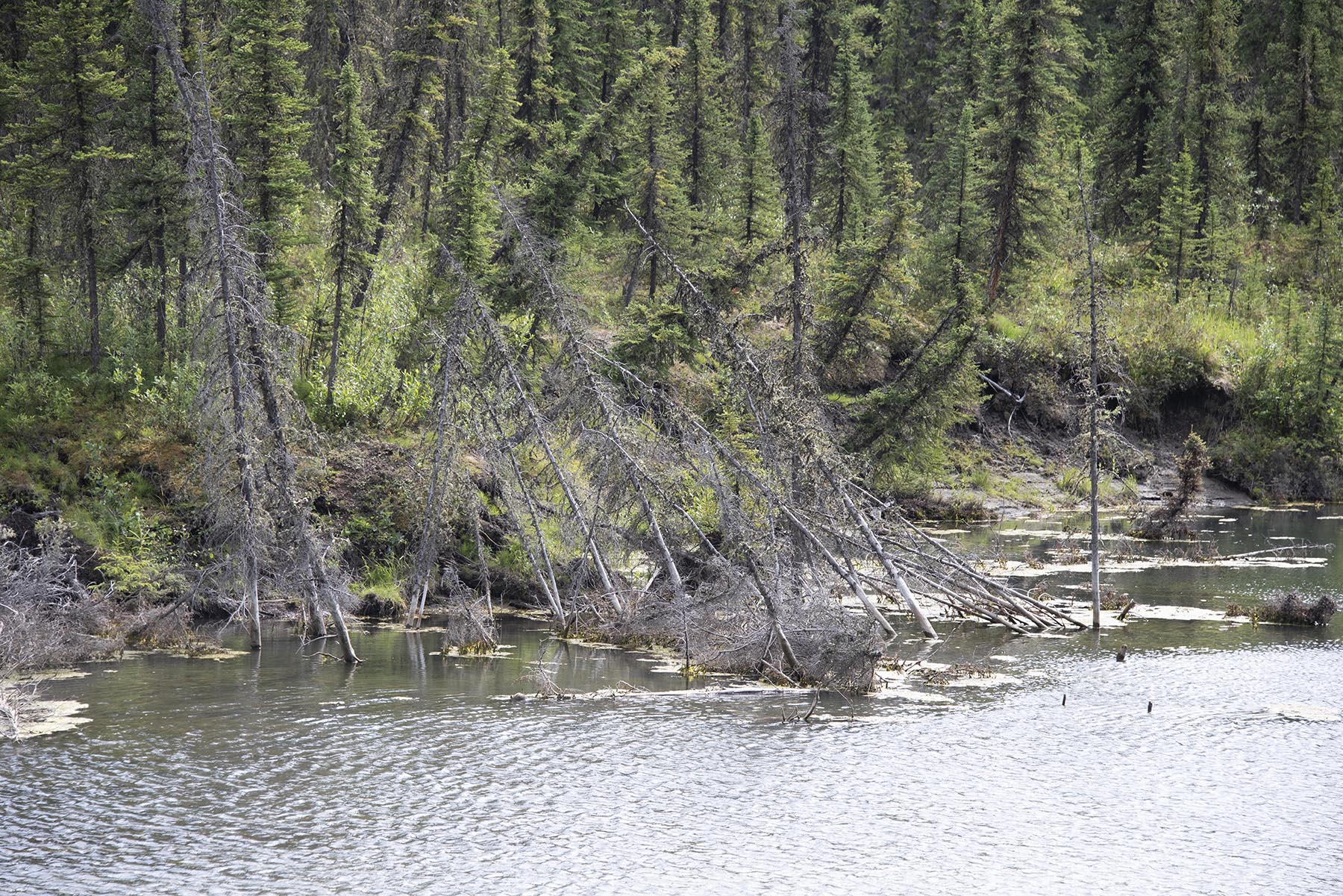 Glenn Highway, Southeast Alaska — each year during what used to be just a two or three month warm season in our old climate, now we see at least two months more summertime in the far north. At its most extreme, parts of the Arctic ocean just north of Canada have warmed 14 degrees F above normal. All that extra heat, with summer nearly twice as long, has created a new world in the North that is brutally lethal to ice. 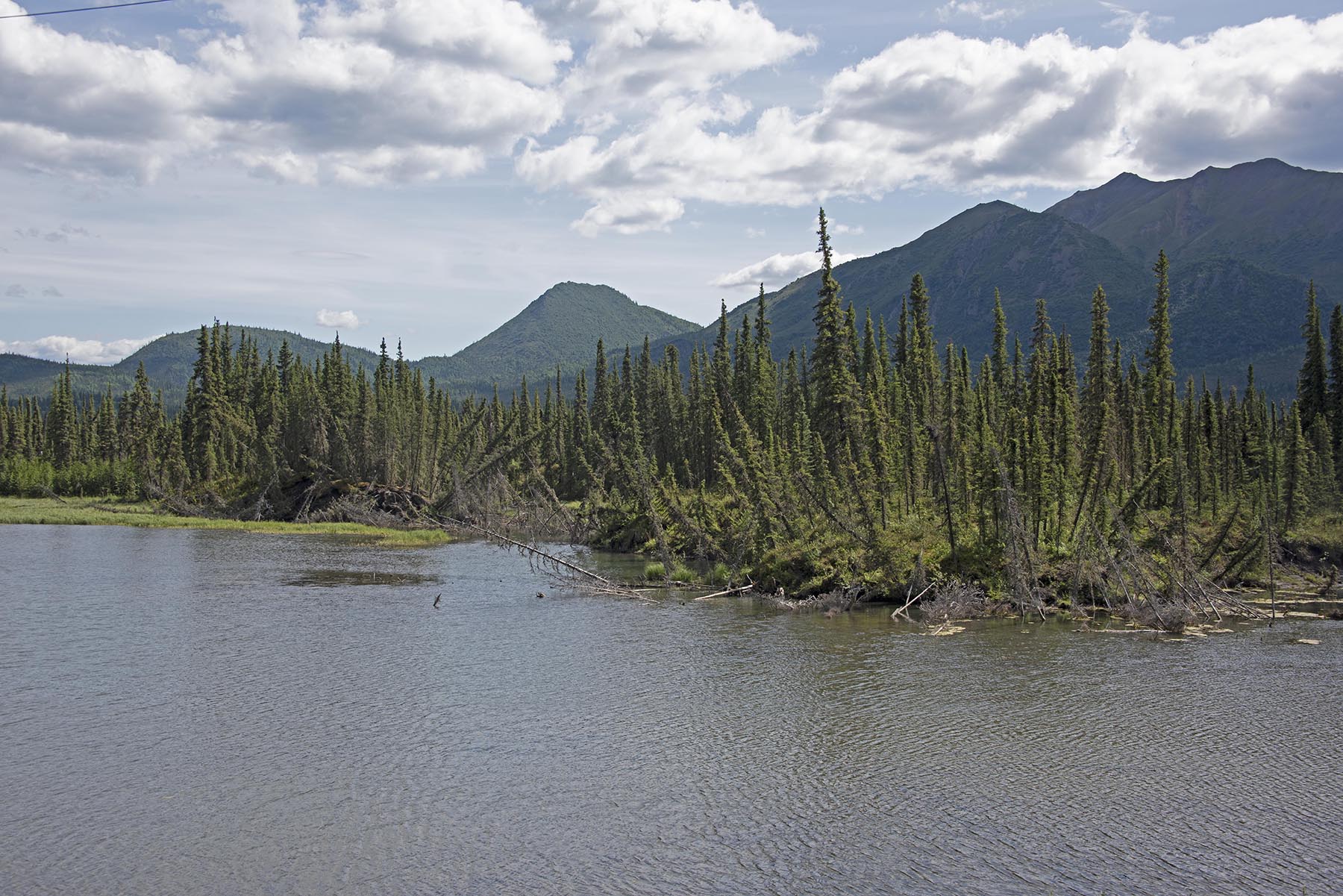 Glenn Highway, Southeast Alaska — Permafrost can be over 80 percent ice and 750,000 years old. Much of this permafrost has been here for seven or eight 100,000 year-long ice ages, never melting, forever getting deeper and deeper. 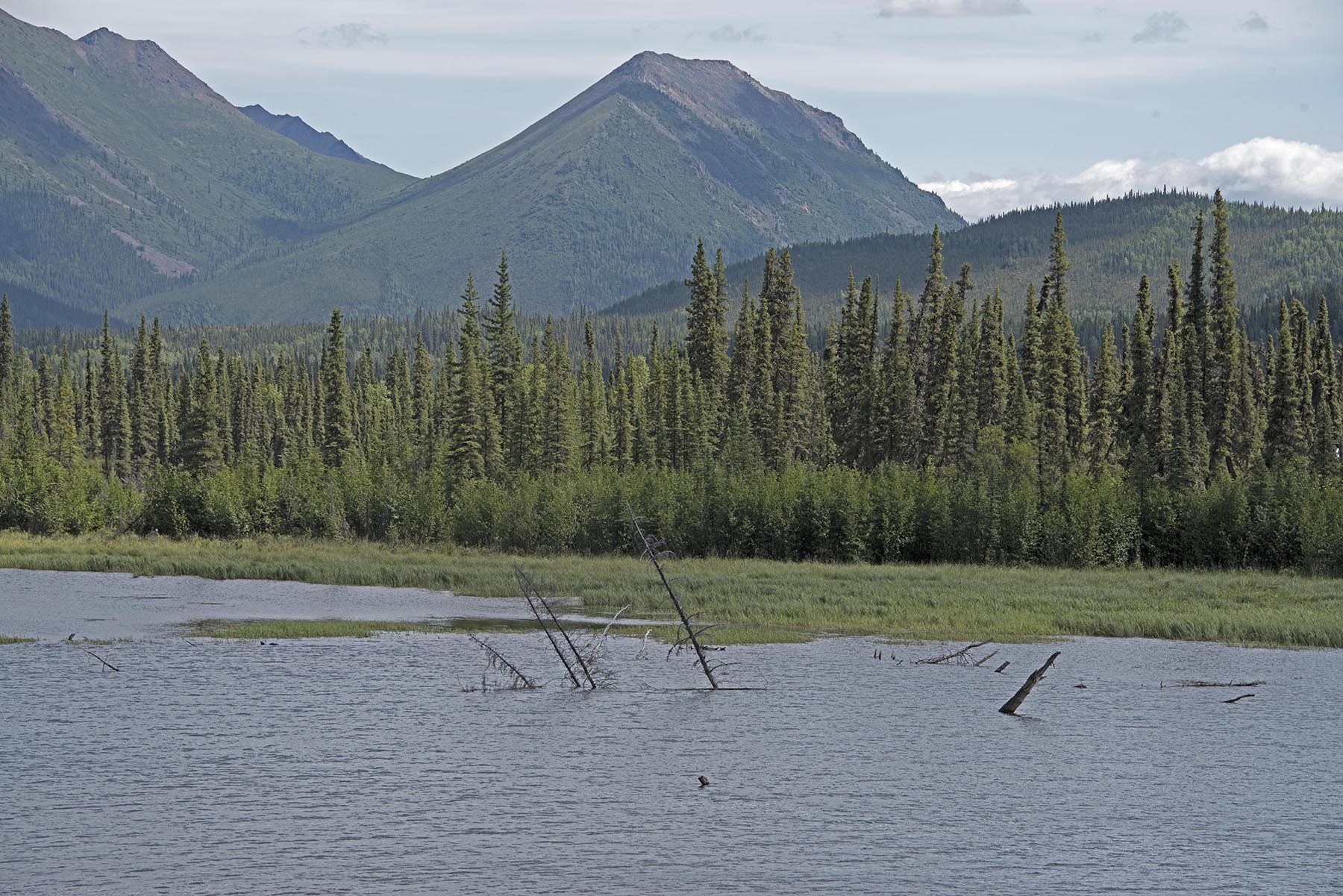 Glenn Highway, Southeast Alaska — So much ice is in permafrost that it almost always melts out into lakes. Who knows what forests lie at the bottom of these lakes? Who knows how deep the underlying permafrost is and how deep the lakes will become? 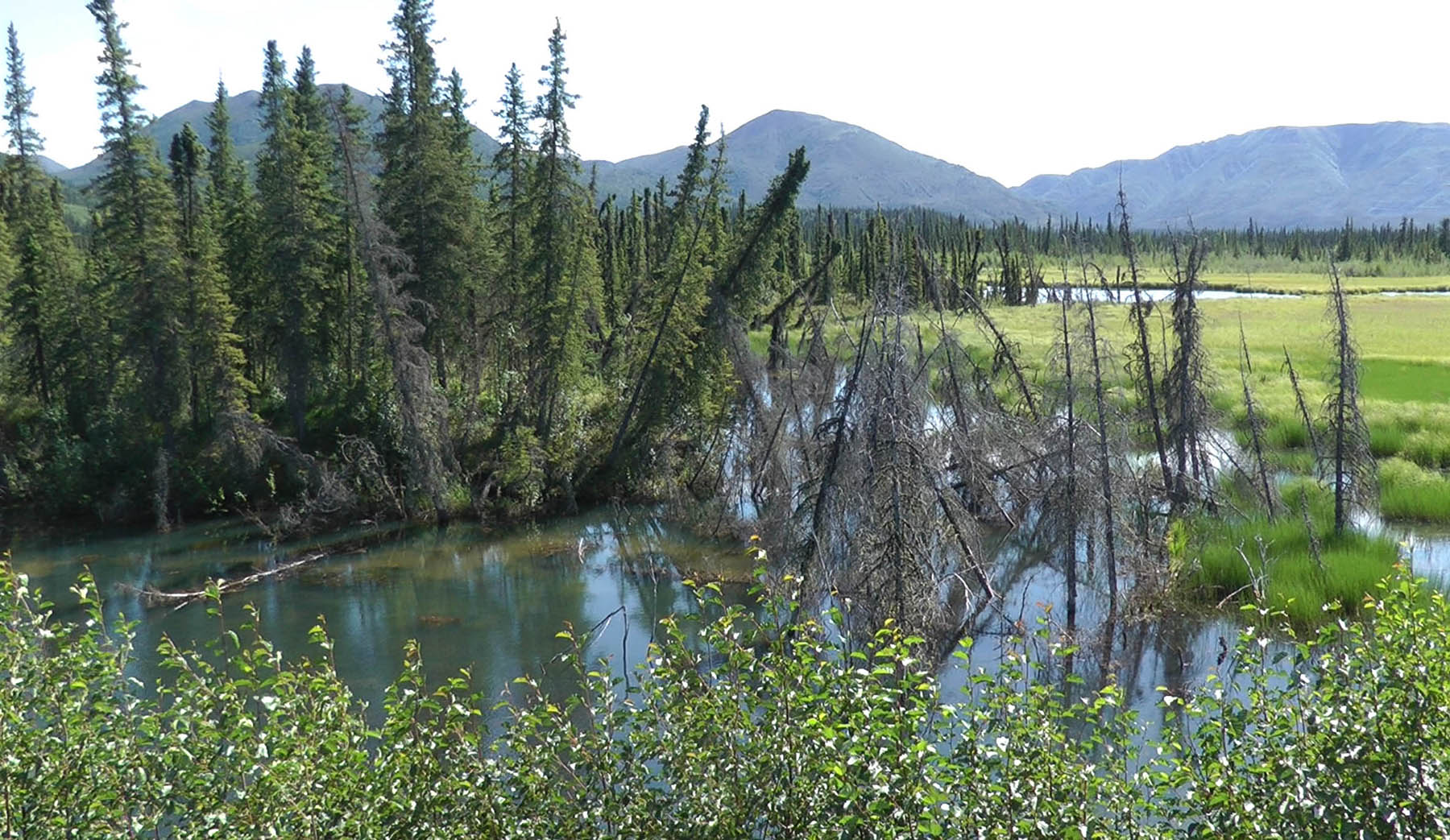 Alaska Highway, Northern British Columbia — Twenty-four percent of land area in the Northern Hemisphere is covered by permafrost, accounting for over two percent of the total amount of water on Earth.

Permafrost Melt, Southern Yukon Territory — There are three to four times as many greenhouse gases in permafrost and in frozen methane in shallow Arctic waters, than area in all of the fossil fuels ever burned and remaining in the ground. The methane in shallow Arctic Ocean waters was laid down as permafrost during 100,000 year long ice ages when sea level was 300 feet lower than today. 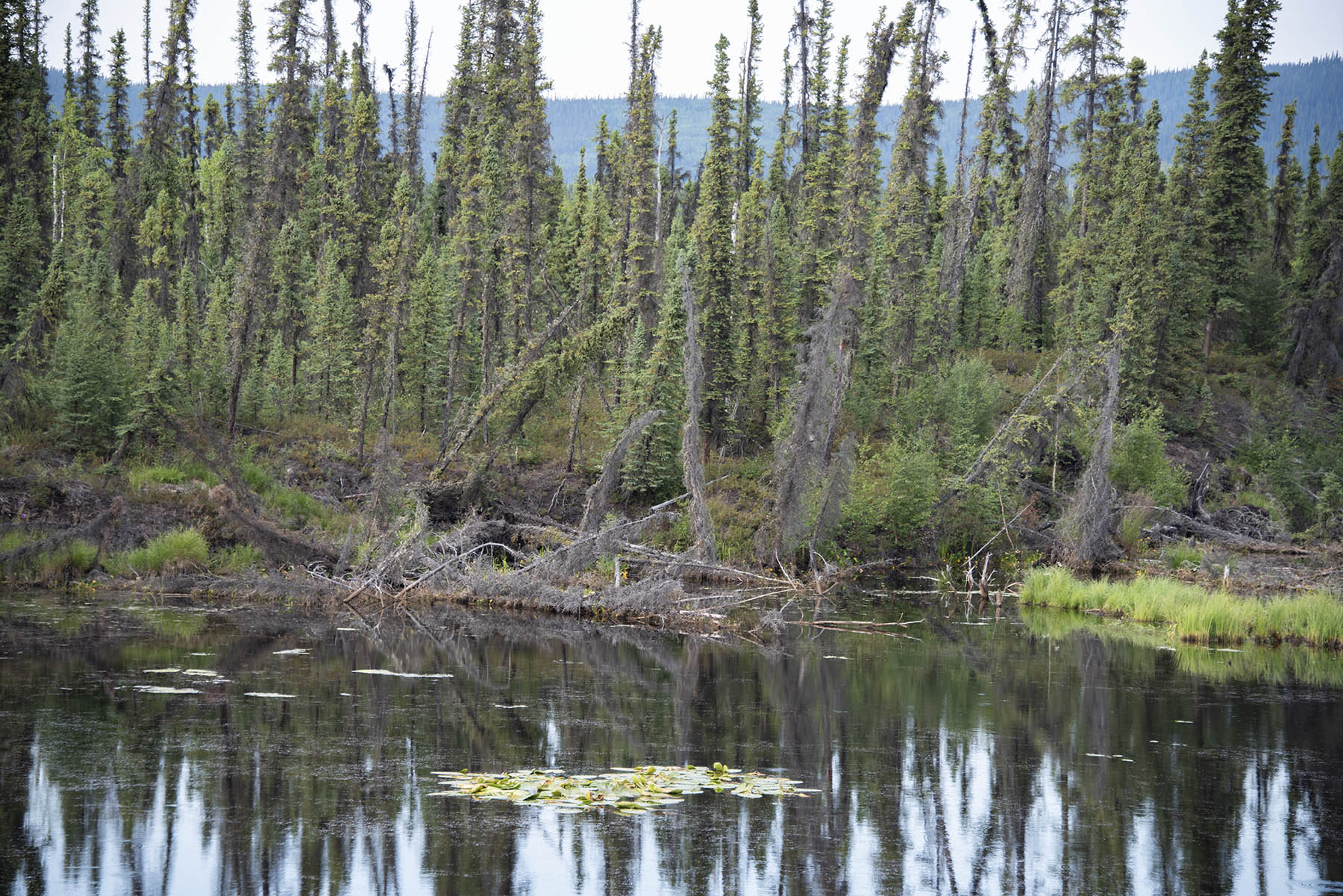 Alaska Highway, Northern British Columbia — It’s unfathomable that so much permafrost has already melted in Alaska that it has flipped from a carbon sink to a carbon source and is now emitting greenhouse gases faster than it can absorb them.

Southern Yukon — Data from the National Oceanic and Atmospheric Administration’s Barrow station indicate that October through December greenhouse gas emissions from surrounding tundra increased by 73% since 1975. 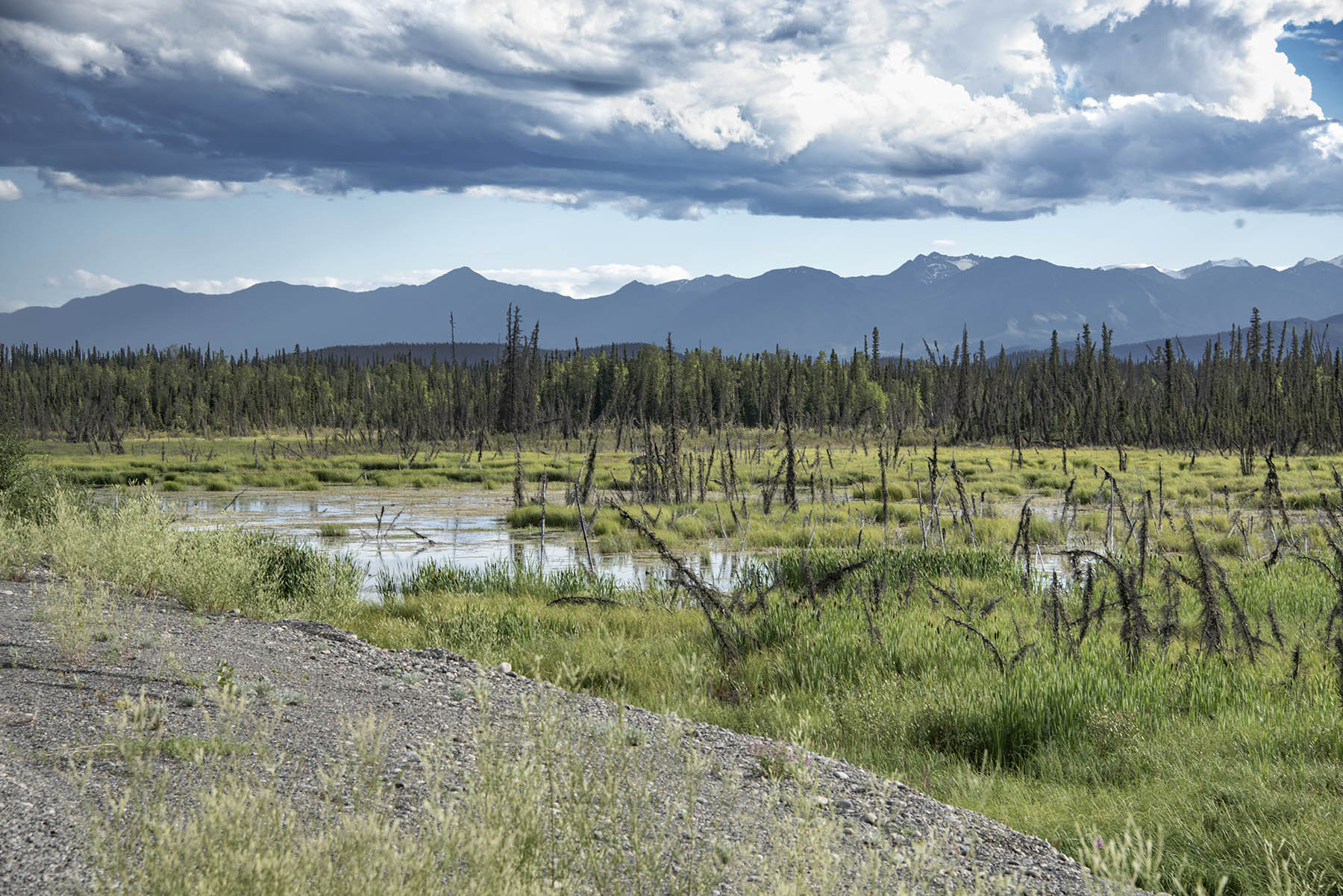 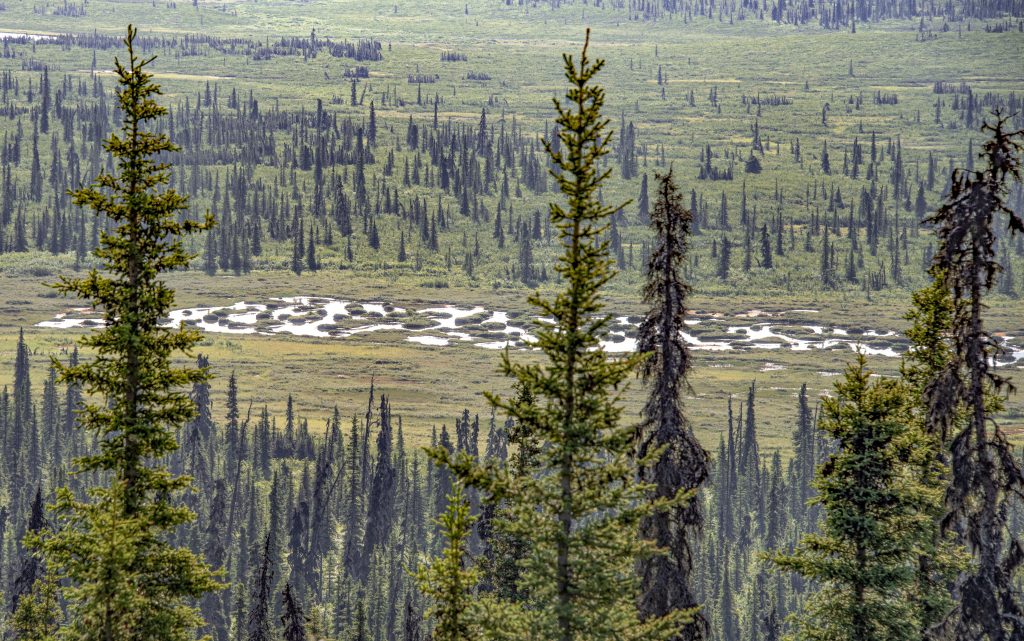 Denali Highway — Flats and treeless areas melt first because trees shade the permafrost in summer and keep it cool. 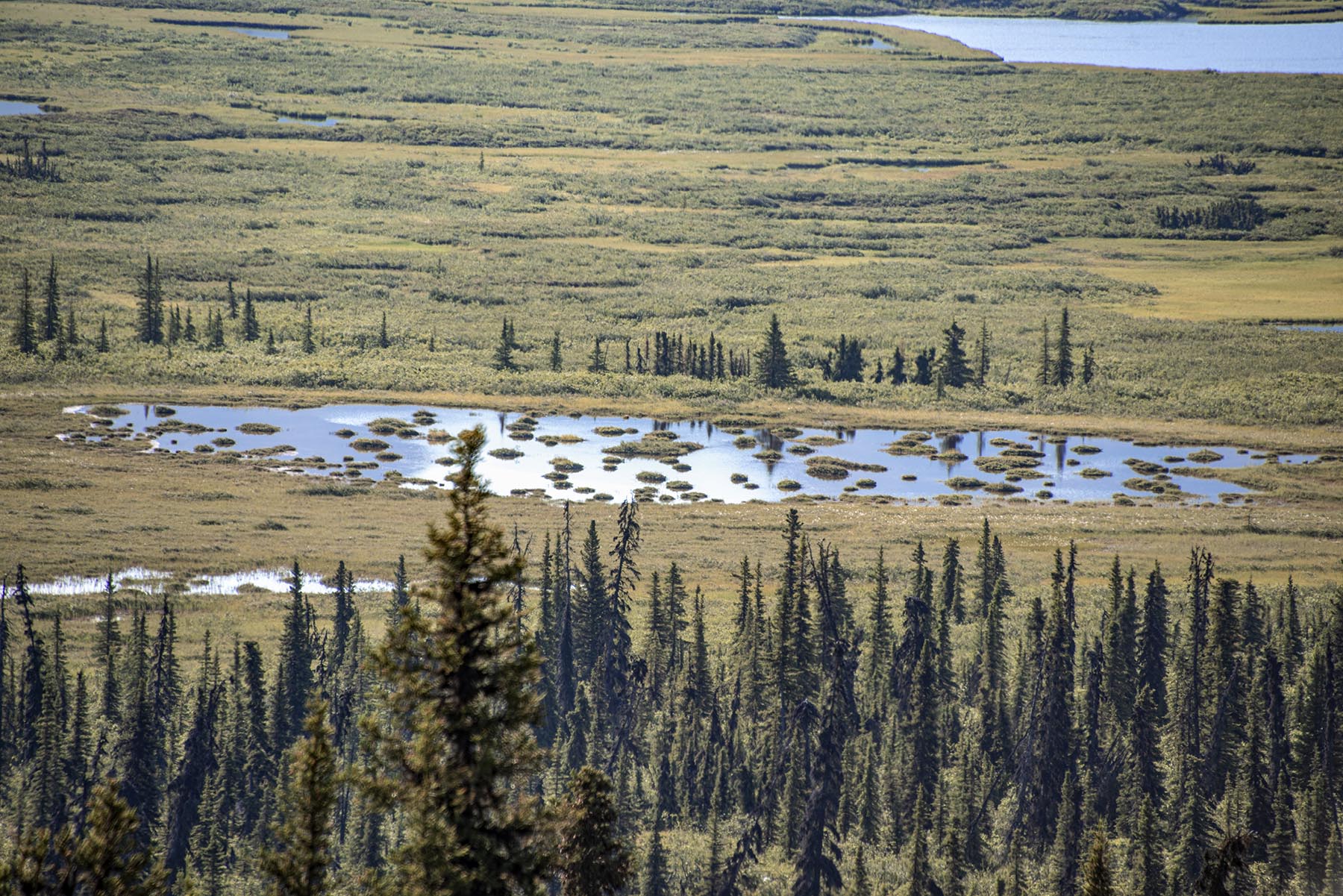 Denali Highway — Near the Thompson River.

Denali Highway — low lands and marsh areas like these are changing into open water at an astonishing rate. Open water absorbs many times more heat than grass or trees. 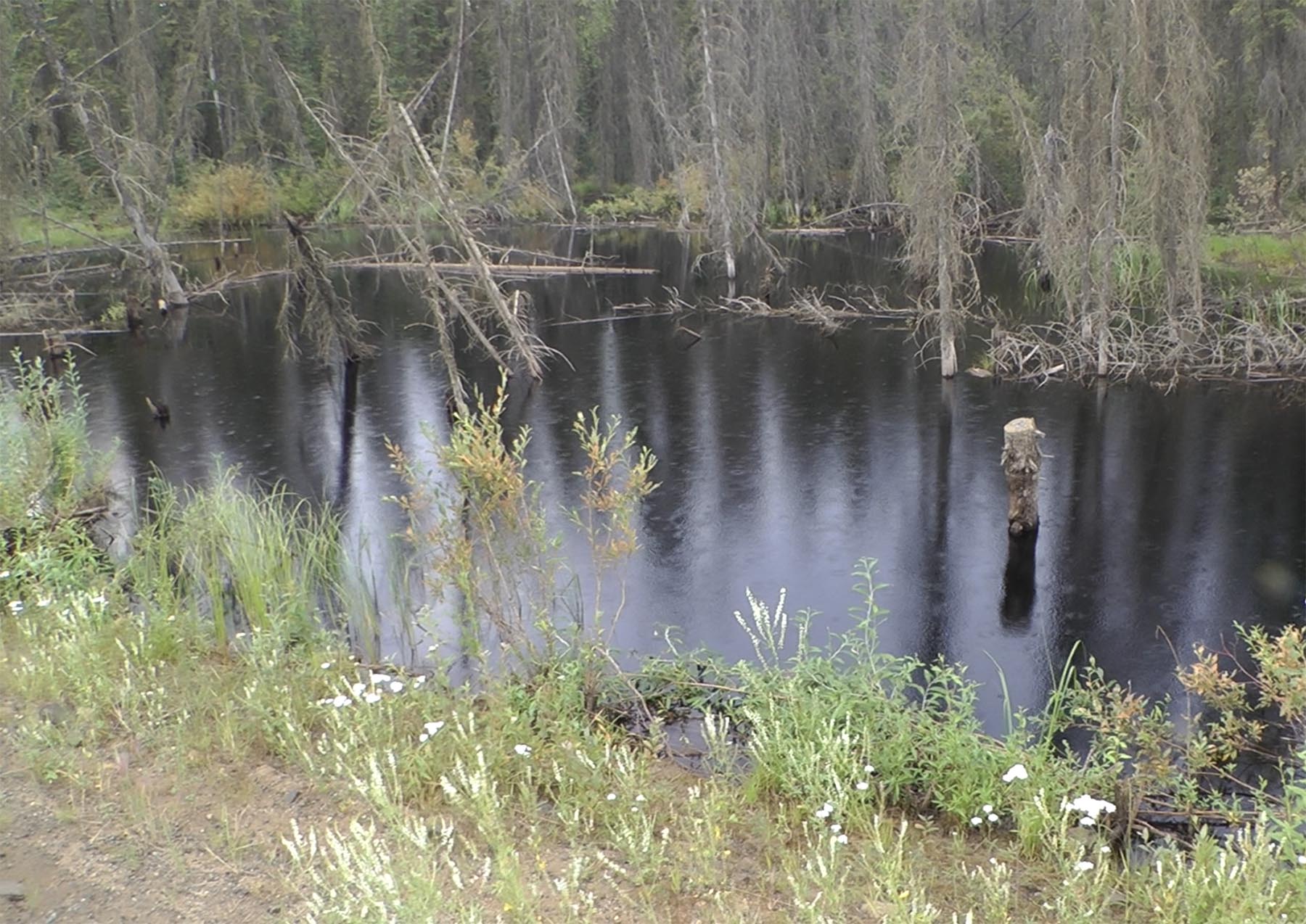 Dalton Highway, the road to the Arctic Ocean along the Alaska Pipeline – This is deep warming and critical to overall permafrost melt. Between 1990 and 2016, an increase of up to 4 °C has been observed in terrestrial permafrost. 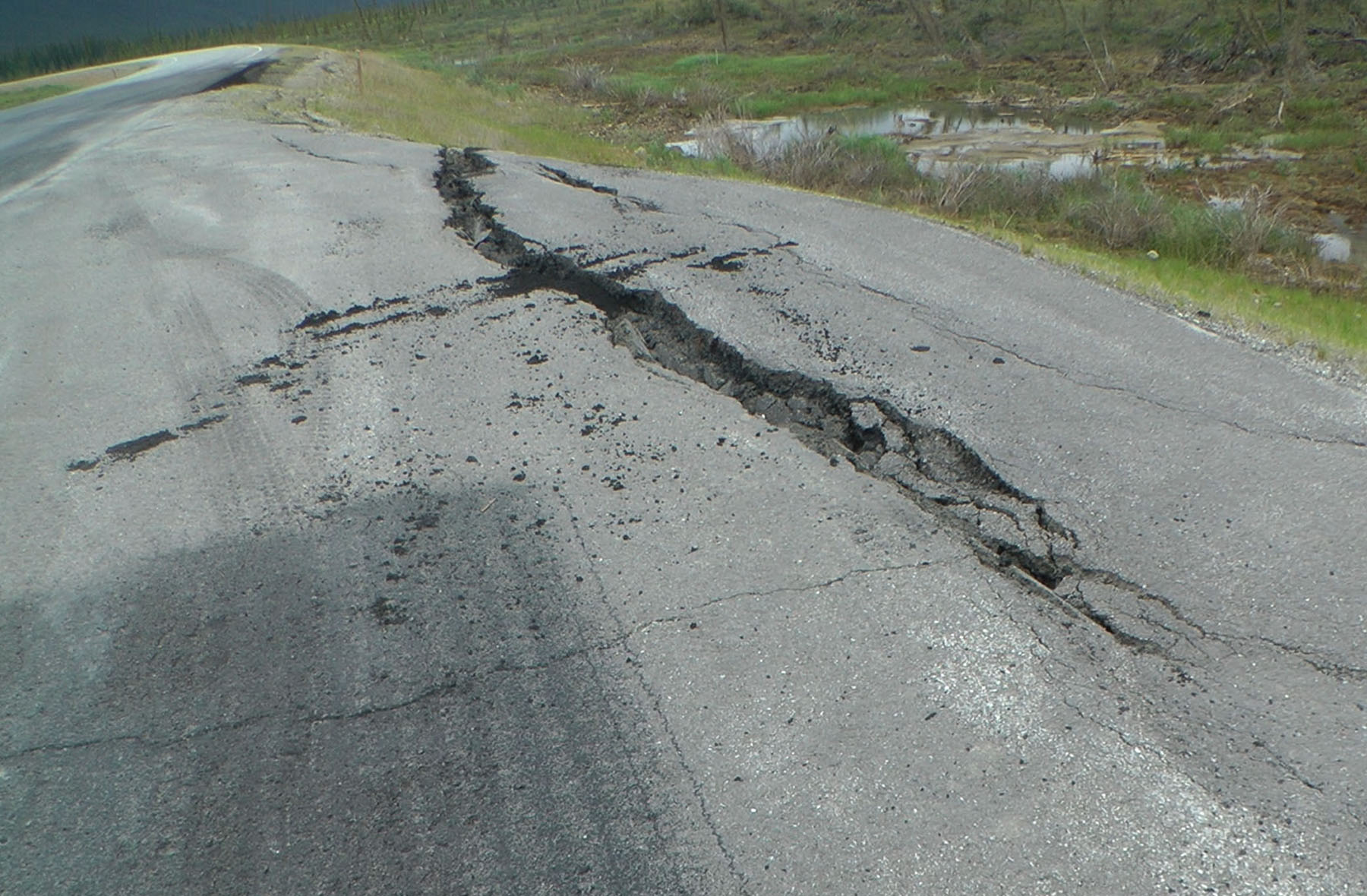 Dalton Highway permafrost melt road damage  – This melt is not isolated to Alaska. Across the entire northern part of Earth, warming is vastly greater than the average global warming. 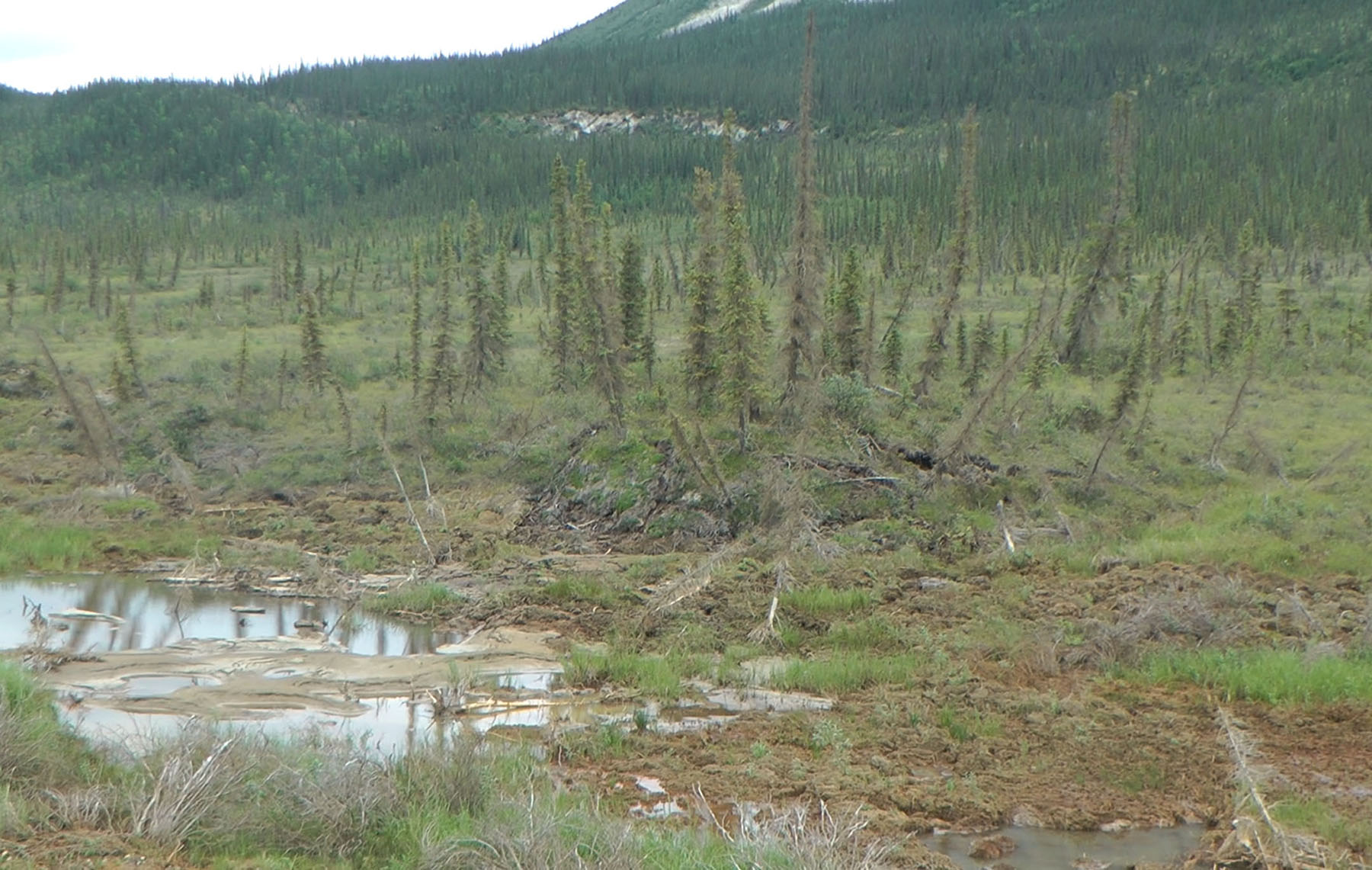 Dalton Highway, Brooks Range – In a settlement called Cherskiy, Russia in Siberia, National Geographic reports that surface permafrost in the active layer that normally thaws and refreezes every year, did not refreeze over the winter of 2017/2018. It sounds impossible, but warmer temperatures, as long as it remains below freezing, allows more snow to fall. Snow is an insulator. In Cherskiy last year, it snowed big and it snowed early and the resulting insulation prevented the normal Siberian cold from freezing the ground. At the University of Alaska, Fairbanks, frozen ground research plots, Since 1989 the complete freeze-up of the active layer was mid-January. Since 2014 it’s been late February into March. 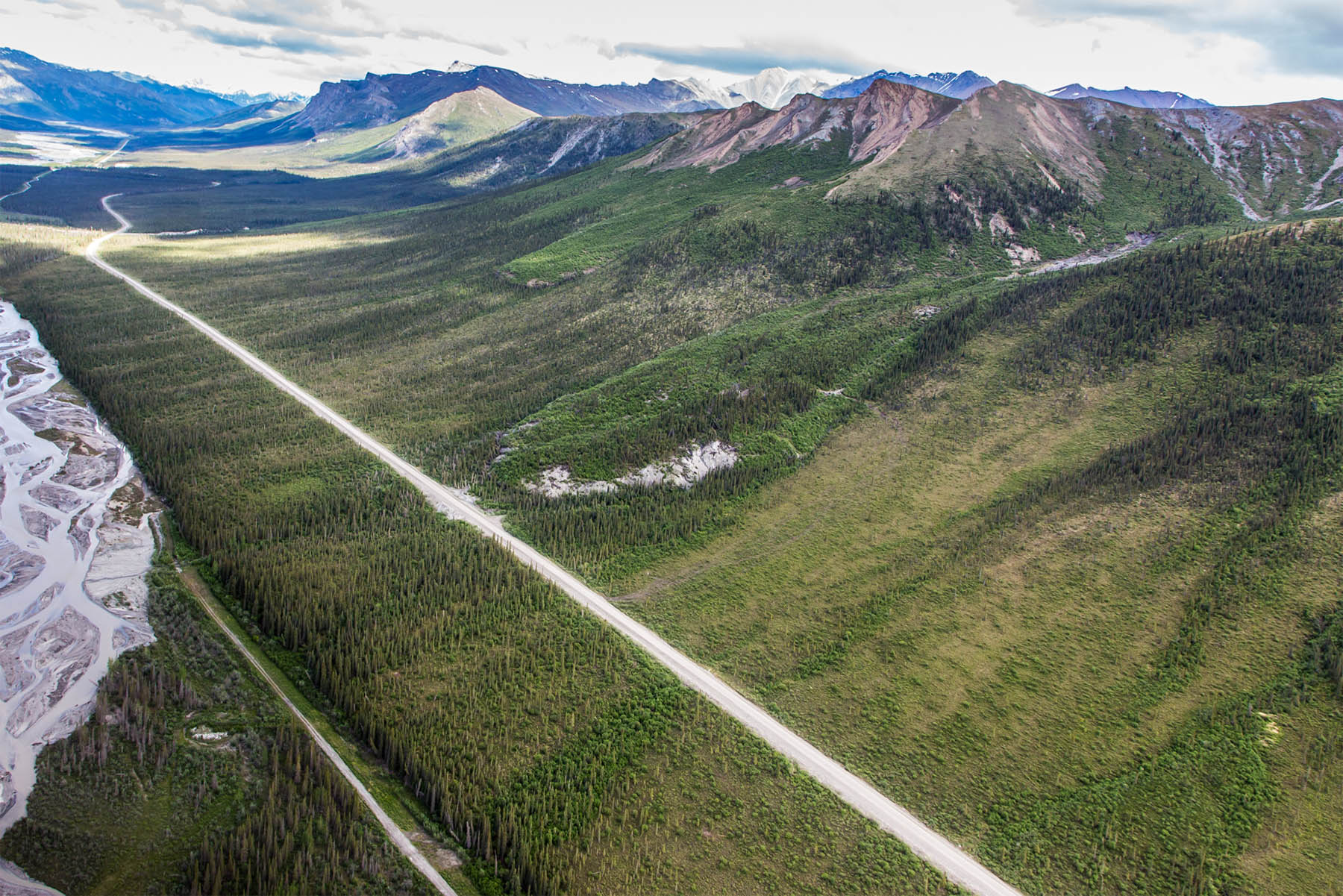 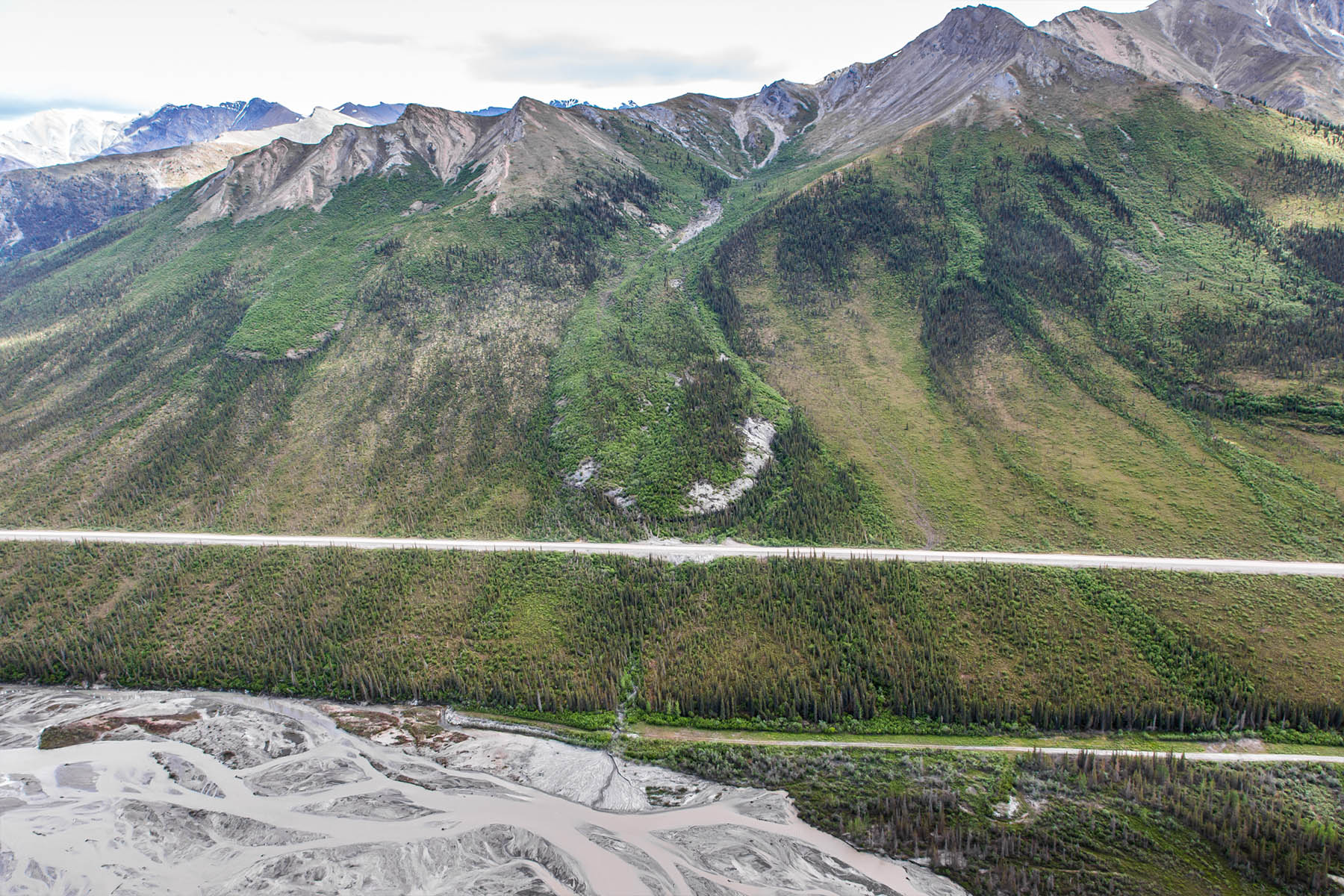 This debris flow is encroaching on the Dalton Highway. (Photo: University of Alaska) 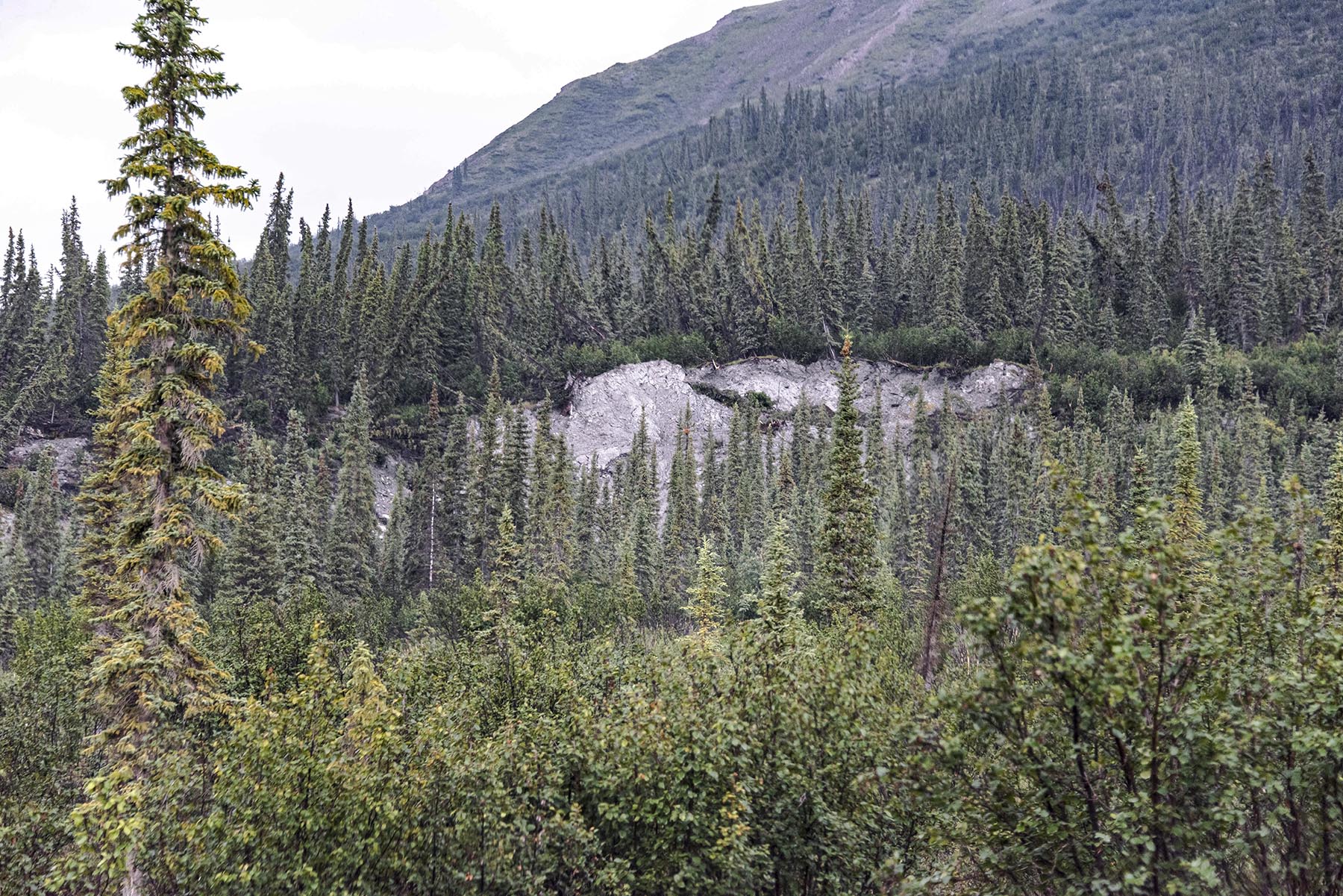 The same debris flow as above in the University of Alaska photos. 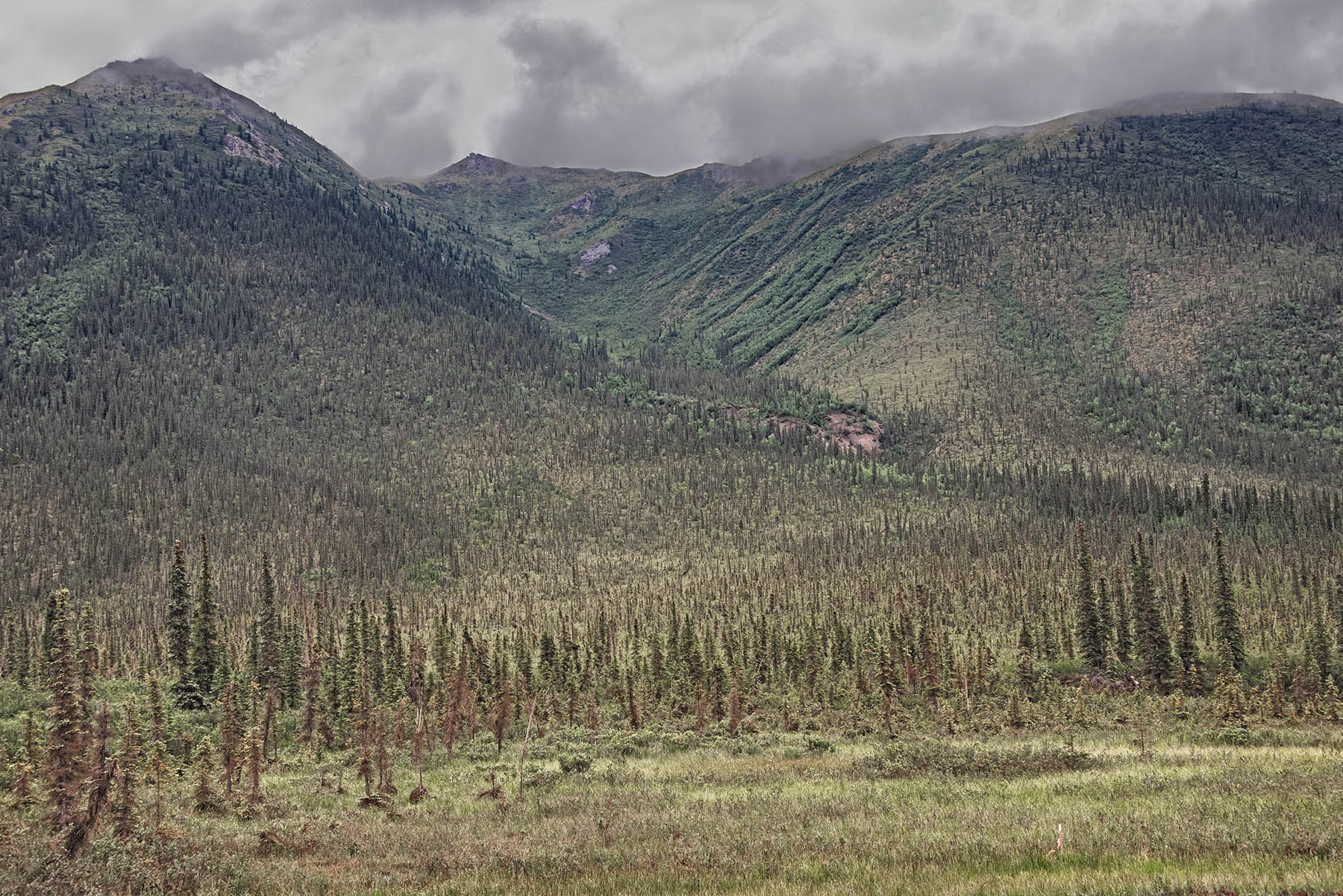 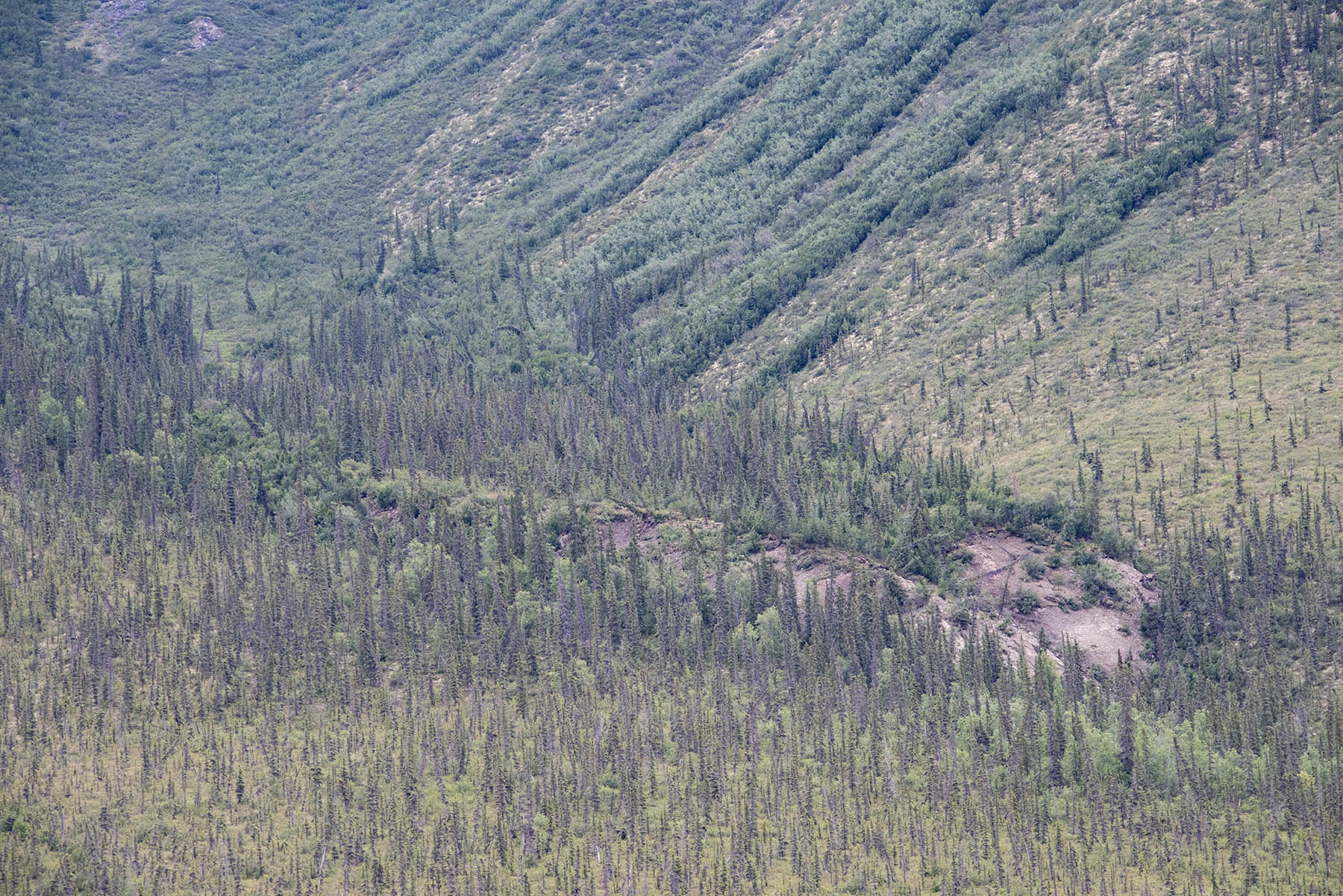 Close up of the debris flow above. 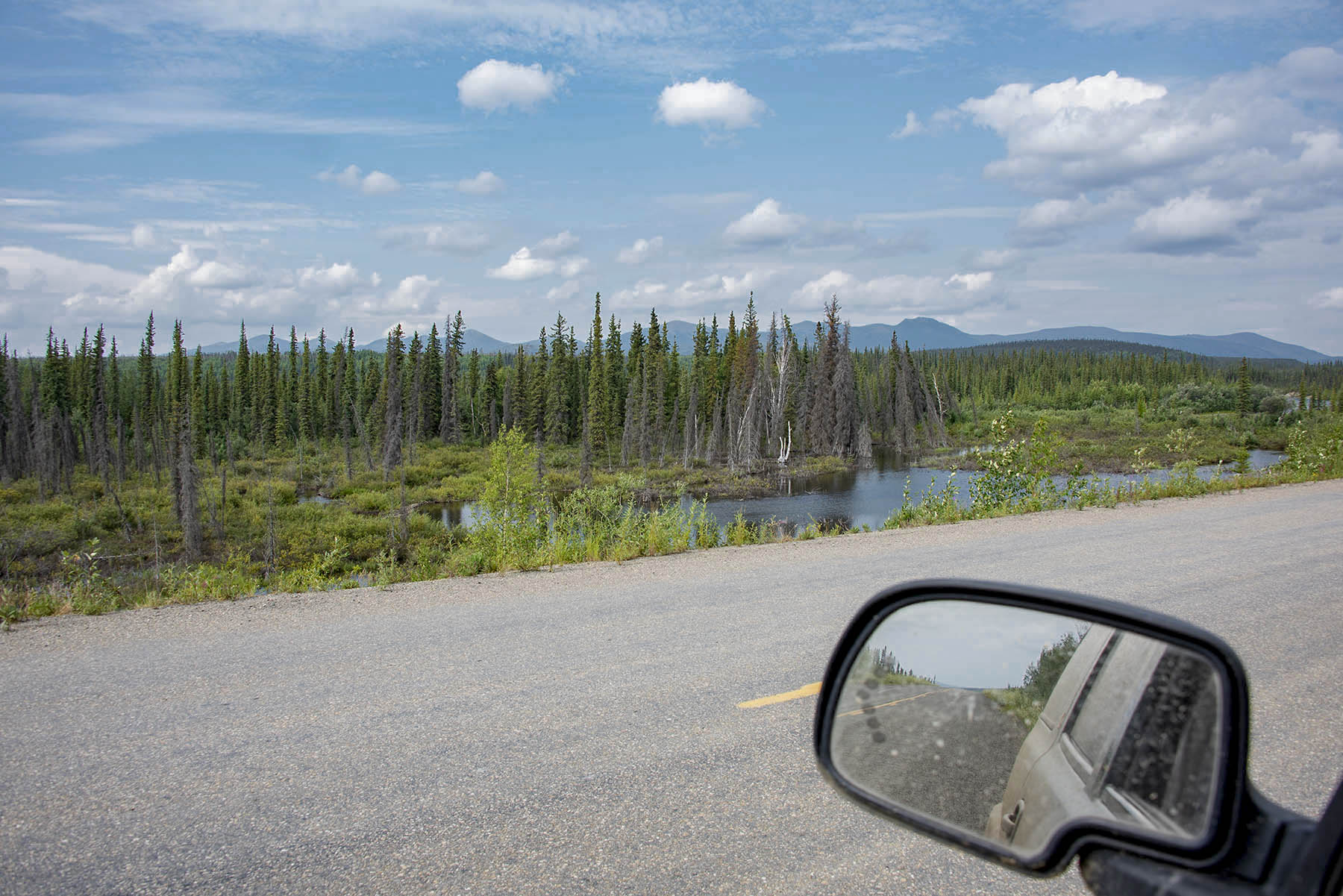 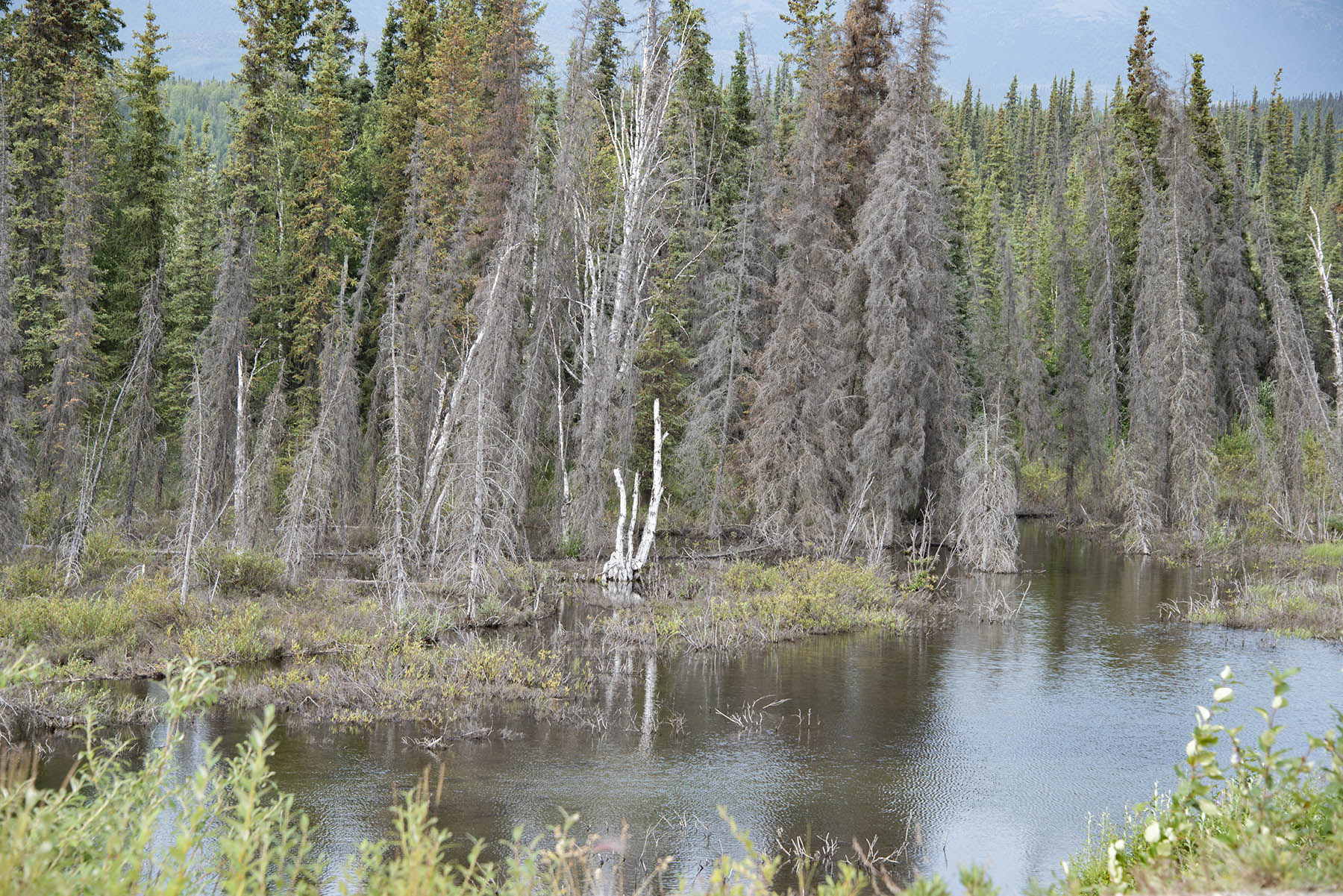 Closeup of the above image. 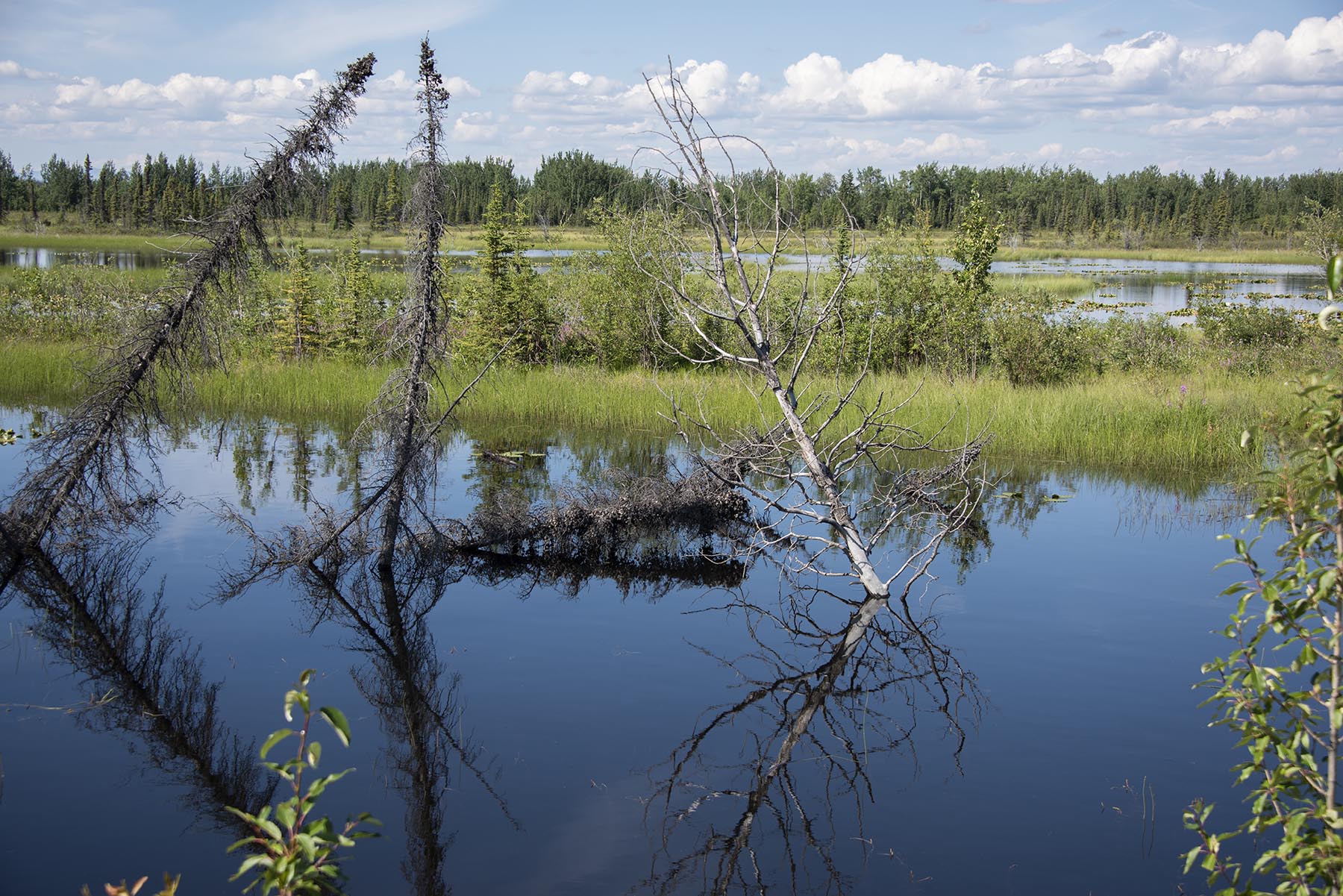 Dalton Highway — the extents of permafrost melt in this vast state are very difficult to determine from the road. 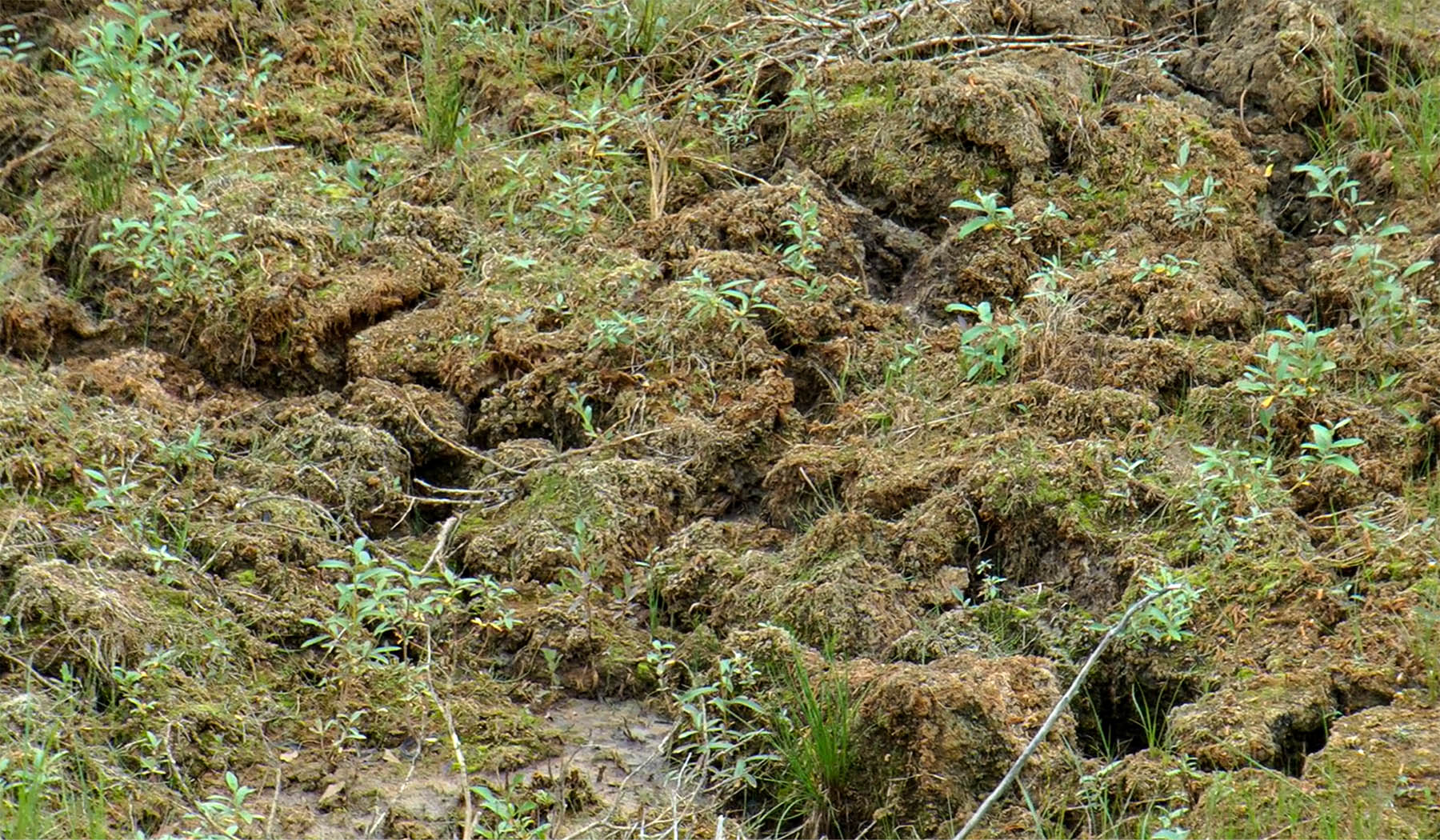 Dalton Highway — few areas of permafrost melt are dry like this one. 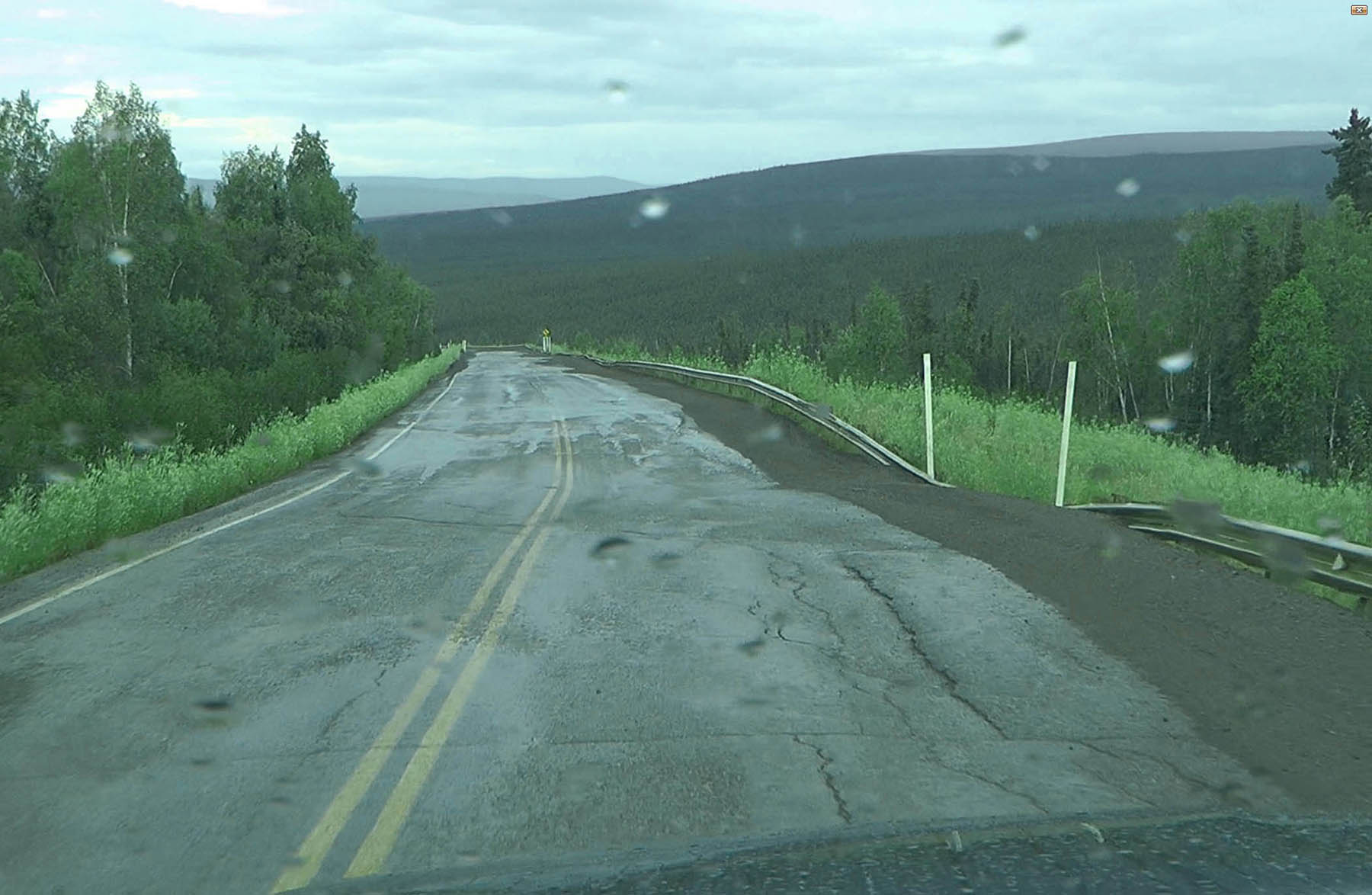 Dalton Highway — Bumpy roads are everywhere, but when the guardrails get buried by road damage maintenance, it’s permafrost melt. 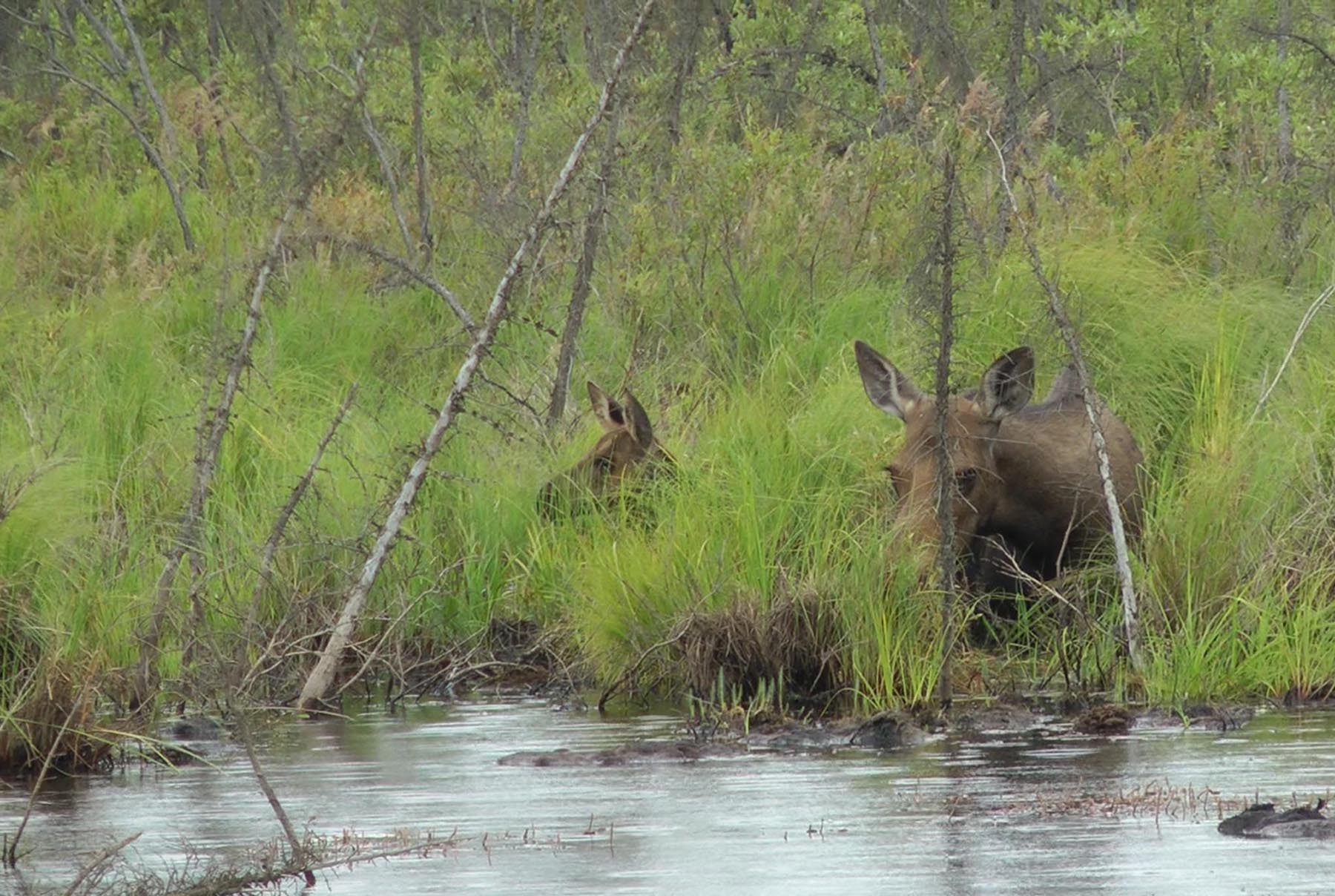 Dalton Highway — Moose cow and calf in permafrost melt: In the Canadian High Arctic between 2003 and 2016, average thawing indices were one and a half to two and a half times greater than the 1979–2000 normal. The melt is so abrupt, it is occurring 70 years ahead of projections for the RCP 4.5 scenario. This scenario is basically the best that can be expected under Paris Emissions reductions limiting warming to 2C by 2100.

Danger in Traditional Science: Almost across the board, writers, reporters and especially scientists caveat their findings and reporting with, “Hey, we might not be correct on this and it may not be this bad, it may not even be happening at all. We just can’t tell yet. The science is yet young. There is not a robust consensus of findings. The statistical confidence is not certain. There is not enough data yet… ” This scientific reticence and false bias in media reporting has created a false confidence that our world is a hardier place than it almost assuredly is. The same scientists have been telling us for 30 years that if we didn’t do anything it would get far worse much faster. We didn’t do anything, or much, and it has decisively become much worse. The big challenge with these reticent and fairness biased professionals is that they understate. When was that last time that impacts were less extreme than we were anticipating?