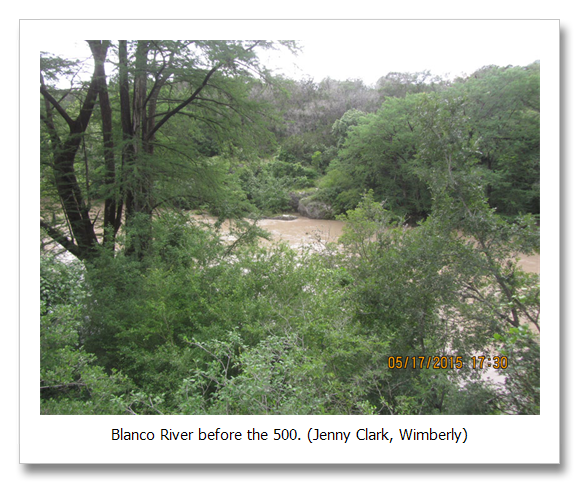 Projections are that by mid century 100-year events will be happening every other year, 500-year events every ten years. Also remember too, this frequency is for one discrete geographic location. The Guadalupe River has seen four events more extreme than a 100-year storm in the last 17 years. The Blanco has seen two in 19 months. Onion one in 2013, Marble Falls, one in 2009.

These are just a few of the extreme storms in our area lately. In my other line of work I help residential homeowners with their flooding problems. All over Austin people tell me the extreme rain that flooded their home has never happened before. Most have been here less than 20 years, but the scientific literature is saying the same things.

Work out of Duke, the University of Texas, Georgia Institute of Technology and NOAA tells us that both floods and droughts have doubled in the U.S. southeast over the last 30 years. The Texas State Climatologist, possible the most conservative state climatologist in the nation even says that extreme storms have increased in Texas. (1,2) 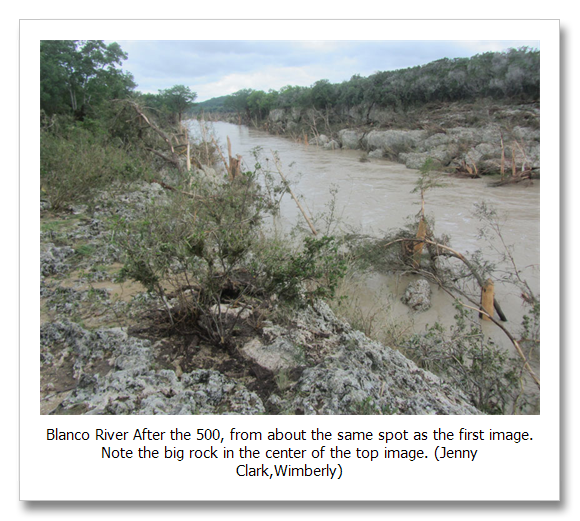 The astonishing thing with climate change is that all discrete geographic locations will experience radical increases in extremes. It won’t just happen in San Marcos or New Braunfels or Wimberly, It will happen at everyone’s homes, everywhere, and the storms will continue to worsen as we warm.

How Bad Will It Get?

The following may seem a little technical, but the underlying concept is clear:

TP-40, or Technical Paper 40 is a piece of fundamental meteorological science produced by the National Weather Service in 1961 (at the time they were called the Weather Bureau). This document basically defines intensity, duration and frequency for rainfall events across the continental U.S. It basically defines what we know as the 100-year storm.

For example; The 100-year, 6-hour storm for Austin is 7.1 inches. In other words,  a storm with a return frequency of 100 years, that could be said to occur on average every 100 years, that has a one percent change of happening in any given year, is called the 100-year storm. If the storm starts and stops raining in 6 hours, then it is the 100-year, 6-hour storm. TP-40 lists about 50 of these different storm duration, intensity, frequencies from the 30-minute, 1-year to the 24-hour 100-year.

TP-40 has a nifty little trick up its sleeve also that can help us interpret how much more significantly weather extremes will change as our civilization continues to ignore climate change and out planet continues to warm. Remember, the main ingredient in extreme weather is the moisture content of the atmosphere. More warmth allows more moisture to be held in the atmosphere creating more intense precipitation.

A thing called the PMP, or Possible Maximum Precipitation is defined by TP-40. The PMP is exactly as it sounds–physically, the most rainfall that could fall. It is a determination of how much rain could possibly fall if the physical conditions were perfect and temperature and humidity maxed out.  Back in 1961 the Weather Bureau did these calcs for the contiguous U.S. and this document has been the starting point for weather intensity evaluation ever since.

To help understand increasing extreme event precipitation on a warming world, and how much more extreme our weather world could plausibly become at the physical limits of the most extreme, we can evaluate current extreme events within the context of the PMP.

The headroom our climate has to become even more extreme is almost unimaginable. Think of a guitar amp that goes to 10 on the volume knob. If the volume knob worked linearly and 1 was our old climate, the volume knob today would be at 1.5 and warming already in the pipeline puts us at about 3.

This doesn’t mean that warming in the pipeline, if we ceased all excess greenhouse gas emissions today, would triple the extent of extreme storms. The relationship may be non-linear, It could be worse.

What we can draw from this interpretation is the amount of possible change that could occur, if were were so unlucky as to have this mental climate science block frozen in place.
National Weathers Service RP-40 (The TP-40 methodology for extrapolation of extreme events beyond the 100-year is on page 5.).
http://www.nws.noaa.gov/oh/hdsc/PF_documents/TechnicalPaper_No40.pdf

1) Floods and drought have doubled in the U.S. southeast in the last 30 years…
Li, et. al., Changes to the North Atlantic Subtropical High and Its Role in the Intensification of Summer Rainfall Variability in the Southeastern United States, Journal of Climate, October 2010, abstract.
http://journals.ametsoc.org/doi/pdf/10.1175/2010JCLI3829.1