Pop Quiz: How Much of the Warming is Caused by Man? 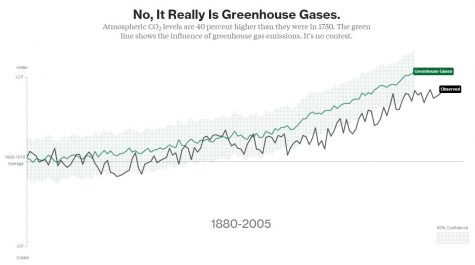 Pop Quiz: How Much of the Warming is Natural?

Or more precisely; “How much warming has been caused by mankind’s emissions of fossil greenhouse gases?”

This is a piece of science I have been struggling with since I discovered the Milankovitch cycles or how Earth’s rotation around the sun has been responsible for virtually all of Earth’s prehistoric climate changes. Milankovitch theory says that Earth should be cooling now, after our last interglacial warm period between ice age pulses. (Ruddiman 2005–Ruddiman also has excellent knowledge of when global warming actually began–5,000 years ago with rice cultivation. Ruddiman How did humans first alter global climate Scientific American March 21 2005. Link to paper)

Current evidence of ice elevation history on Baffin Island, just west of Greenland corroborates Ruddiman’s theories with evidence that shows the 100 or more study sites in this research cooled 2.7 degrees C after 5,000 BC and the peak of the interglacial warmth. But chaos remains in the very short-term like the last of couple of hundred years, and the question remains, “How much of the warming is natural?”

The answer was published in the 2013 IPCC report and to this day, even climate scientists who I give this pop quiz to, who are not specialist in warming attribution, tell me “C. Most of it, or occasionally, “D. All of it.”

When I found the answer, which is obviously not “C or D,” I was still reticent about writing about it, so I asked the manager of the climate change attribution program at the UKMet (Peter Stott of Great Britain’s national weather service.) What Dr. Stott told me was that yes, more than all of the warming has been caused by mankind’s greenhouse gas emissions.”

So, it was a trick question. The answer is “E. None of the above.” About 135 percent of warming in the thermometer record has been caused by the emissions of fossil greenhouse gases, or 35 percent more than we have measured with our global thermometer network. The reason it can be “more than all,” is because the emissions of fossil global cooling aerosols alongside fossil greenhouse gases has masked warming that should be showing up on the thermometer. (see here)

A very valuable piece of outreach was published by Bloomberg in June 2015 that has just come to my attention and it helps show this realtionship with temperature graphs. http://flip.it/jBVzMm

This Bloomberg article compliments a piece I had written in April 2015: IPCC: More Than All of Observed Warming Has Been Caused by Humanity’s Emissions.

Bloomberg had one regrettable omission in their presentation however. It is an extremely widespread and pervasive belief by even climate scientists who are not specialists in attribution (the causes of warming,) that part of the warming is natural. This is a valid assumption but,

1) Warming from natural causes is an exceptionally tiny portion of the warming or less than 5 percent, and

2) There is a huge amount of global cooling from aerosols that has masked a very large amount of warming in the short-term 20 to 50 year climate change time frame (see here.) This global cooling is identified in the Bloomberg outreach on slide eight, but its significance was not defined. If we were to stop electrical generation from coal, because coal emits almost all of the excess global cooling aerosols, warming would be 35 percent more than the thermometer record shows. So in fact, we have experienced 135 percent of total warming we have observed, and zero of this 135 percent is from natural causes.

The Bloomberg outreach definitively shows that very little warming can be attributed to non-man made origins, but they completely miss the connection the cessation of fossil fuel emissions will results in warming, in time frames that matter, not cooling, because aerosols have masked so much extra warming.  Without the understanding that aerosol masking hides a full third more warming than we have experienced in the thermometer record, this missed connection reinforces the very widespread myth that climate pollution is not as serious as it could be. When in fact, it is more serious than the thermometer records show.

Even more important. Climate control strategies promote more warming, not cooling, because stopping electrical generation from coal creates more warming as we stop the emissions of the masking global cooling pollutants. Net warming is something that simply has been poorly understood prior to a half-dozen years or so ago. Implementing current science into policy is something that happens even more slowly than science.