I am talking about climate science business as usual.  As in: classic conservative science. The scientists responsible for this report in the Proceedings of the National Academy of Sciences are stuck inside of their science as usual box. 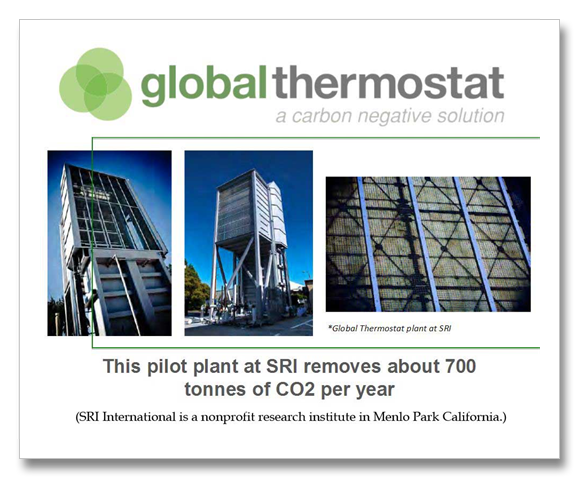 This a long a ridiculous debate where the “air capture” of CO2, in the world of industrial scale processes is compared to new progressive thinking that utilizes much more “organic” processes that rely on natural forces to do much of the work.  This is a big deal between theoretical thermodynamic theorists and the new rules of climate change. The “snake-oil salesman” inference in the MIT press release (it actually said that) is embarrassingly juvenile and tells us something about the mindset of the scientists that are perpetuating this myth. And to think that these folks are on our side. I suppose this goes to show the competitiveness of some scientists.

The one argument that these theorists never broach is the most important one. This is not about thermodynamic equations. What I mean by this statement is that this is not about theoretical efficiency of process. Certainly, removing CO2 at 0.04 percent concentration in the atmosphere compared to 15 percent concentration in flue gas, is going to be a less efficient process — based on current, or old school technologies.  Those processes being 1100 pounds per square inch of pressure and 2400 degrees F temperature.

It is a simple fact that nearly half of our CO2 emissions are from nonpoint sources like transportation or are because if energy loss from buildings. There is no clear mechanism for removing these emissions at their sources like we can do with  catalytic converters on cars, and it is not likely that there will be a solution in time frames that matter (a few decades.)

These sources will (hopefully) get more efficient and emit less CO2, likely in the future that does measure in decades. But what about the rest of the emissions from cars and that buildings are responsible for? thinking we can reduce them by half in the next twenty years is likely optimistic, but even with a 50 percent reduction, 25% remain.

We cannot remove more than 100 percent of flue gas CO2 from flue gas. Agriculture emissions reductions are not likely to be able to continue to decline with developed world efficiencies if our population grows as forecast. Deforestation emissions suffer from the same challenge only the ability of forests to absorb carbon is now being shown to be in jeopardy with the great forests die-offs across the world and specifically with the flip of the Amazon from a sequestration sink to a source of greenhouse gases nearly as large as that of the United States.

The warning that are coming true now (made twenty to thirty years ago) as climate change emerges from the noise of weather chaos,  s so many unprecedented droughts, snowstorms, floods, heat waves and insect infestations are becoming more common across the planet, are sobering to say the least.

The feasible path for preventing the complete destruction of the climate that our civilization evolved in now shows we must reduce emissions to zero or less by some time between 2050 and 2100.  What are we supposed to do with the nonpoint sources? We will not stop burning oil and natural gas by 2100 much less coal, how do we account for the emissions from transportation and inefficiency of buildings?

It must be through atmospheric capture. There is no other way. This is a new climate rule. The new climate rules require that we sometimes look at things differently than we have in the past. This is exactly what Broeker and Lackner of Lamont Doherty Research and Columbia University are doing today. They are no longer thinking of CO2 as a thermodynamic problem, but as an equivalent energy problem.  They are asking what is the cost relationship between emitting CO2 and removing it from the atmosphere, not the simple thermodynamic relationship between the chemistry and mechanical  energy needs to run the process.

To put this into common terms, wind energy is now approaching the cost of energy from coal. If we were to supply the average American with all of his or her energy requirements generated from wind it would take the energy found in the wind in area the size of the side of a barn. Compare that to generating energy from fossil fuels and then removing the CO2 from the atmosphere to get an equivalent energy area the size of a barn window. This is what Lackner and Broeker tell us is possible, based on scale sized process experiments funded by Gary Comer (Founder of Land’s End.) Emitting CO2 and removing it from the air then becomes twenty or more times more efficient at cooling Earth than generating that energy from wind.

Results from their pilot plant show that a structure the size of the Great Wall of China could remove half of our global CO2 emissions every year. 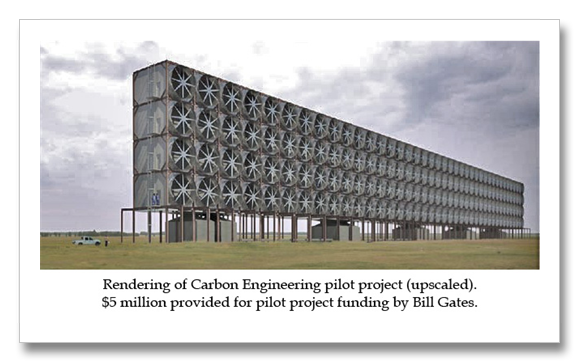 This evaluation is only valid for the short term (climate short term) because after a few days or months the aerosol pollutants fall our of the sky due to gravity or are neutralized by other chemical reaction in our skies. What this means is that once the math is done in about fifty years, king coal will regain it’s seat as the most warming economic sector, but not until then. considering the climate short term is at high risk of crossing tipping points, we can not afford to be addressing coal emission unless we address transportation sectors with two and a half times more resources.

The bottom lines is that we must get moving with the industrialization of air capture.

It’s important to note that air capture will not “empower” citizens to do nothing about climate change for whatever backward reasoning that may be conjured up by those who use this scare tactic.  In 100 years this may be the case, but not until then. The infrastructure that we have to build to remove our gaseous carbon pollution from the air, treat it and dispose of it, is not of the “energy too cheap to meter” ilk. Implementation of this technology will be similar in cost and time-to-build as our wastewater collection and treatment systems — not a trivial undertaking. The costs of this wastewater infrastructure are:

Richard Alley, one of the  most important Greenland ice scientists in the world, tells us in his new book Earth: the Operators Manual, that the cost of our wastewater collection and treatment infrastructure and it’s time-to-build was similar to what we can expect with our new CO2 pollution collection and treatment infrastructure. This is about 1% global annual GDP for 100 years. No trivial amount, but an entirely achievable goal, one that has been achieved several times over in the last century with infrastructures for potable water, electrical generation, transportation, telecommunications, etc. 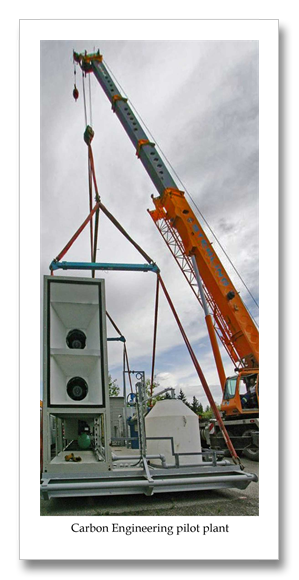 An important aside: if it turns out that the installation of our CO2 pollution collection and treatment infrastructure a trivial thing, and atmospheric removal of CO2 DOESallow citizens to freely emit CO2 that is then inexpensively removed from the air at a far less cost than by generating that electricity from a more expensive technology, what’s wrong with that?

Back to a blistering review of these scientists’ publication: The article is completely biased towards the “dilution principle.”  The chemists and mechanical engineers that are doing these counterproductive inside-the-box evaluations are basing their statements on closed-mind thinking. For example: because the CO2 concentration is about 300 times more dilute in the atmosphere than in flue gas, they tell us that the mechanical costs of scrubbing the atmosphere rather than flue gas will need 300 times more energy to move the air with giant fans and then 300 times more energy  to heat it to extract the CO2 and regenerate the sorbent to repeat the process. This thinking is irrational. Of course removing a pollutant that is 300 times less common in a process stream will cost astronomically more than removing the same pollutant in the same media with a concentration that is hundreds of times greater.

The “new rules” tell us however, that atmospheric removal of CO2 will rely mainly on natural forces to move the air (wind) and regenerate the sorbent (starting with sodium carbonate, instead of sodium hydroxide.)  The “new rules” technology (and man-created energy use required) is completely different than that for flue gas removal.

This report simply does not take this knowledge (this new knowledge) into consideration. It is simply a reiteration of the irrational concerns of the conservative science crowd based on the old thermodynamic evaluation of the old process. What’s more, Lackner and Broeker tell us that the number of btu’s to remove CO2 from the air using “new-age” climate rules is only slightly greater than to remove it from flue gas like we did in the old days of the 20th century even though the concentration is 300 times greater in flue gas. The side of the barn vs. the barn window analogy is a good way to think of this comparison. So the argument that the old school is using is not even valid any longer.

In other words, treating atmospheric CO2 emitted from fossil fuels is 170 times more efficient than generating energy from wind. Yes this does tell us that we can regenerate as much CO2 as we can remove from the atmosphere, but getting to the end of that equation is one that takes a similar amount of time and investment as getting to the end of the wastewater infrastructure equation. Lackner and Broeker have created scale sized units that demonstrate the validity of this new-age science. Claims in Scientific Americanand the MIT press release that say otherwise and that also say that this technology is based only on calculations from bench models are simply invalid.

Overall this push by these thermodynamic zealots is very unscientific in its presentation and their refusal to acknowledge the difference in the principles between the two techniques appears representative of the grasping of straws that comes from a losing cause.

Richard Alley’s, Earth: the Operators Manual, discusses the comparison of our carbon sequestration infrastructure construction relative to that of existing parts of our planet’s infrastructure at length as well.