Climate science moves ahead. Recent findings continue the increase in the rate of sea level rise (Grinsted, Moore, and Jevrejeva, 2009; Jevrejeva, Grinsted, and Moore, 2009; Rahmstorf, 2007; Vermeer and Rahmstorf, 2009.) It is not just that sea level continues to rise, the rate that it is rising is increasing. 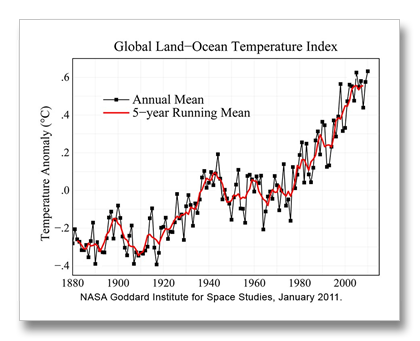 In other words, as our climate continues to warm it is melting more ice faster, so sea level is rising faster.

This is the way science works. We discover new things that tell us clues about how our planet is behaving, then we find more clues, then we find something that seems to disagree. Then, as is often the case, we find that the skeptical arguments were not really what we thought they were.

Houston and Dean may or may not be duplicitous in their participation in this issue, but they do continue to defend their proclamation even after the errors of their analysis have been pointed out.

In this case, “those who would rather we not believe the vast majority of climate science” once again raised the media alarm far and wide to claim that climate change science, as the AGW fanatics know it, is dead and this one little sea level rise paper proves it. But as I said, this is not the case and unfortunately, the AGW crowd, or I should say, climate scientists in particular, do not have the media connections, or necessarily the training to create a media event of similar magnitude as “them.”  So, the news that the this paper’s findings that sea level rise is not increasing, gets massive press, but its refutation gets no notice, no press, no acclaim. 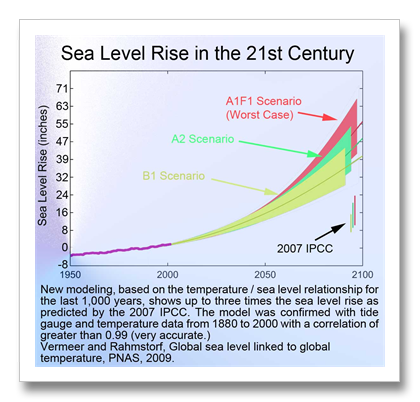 They also looked at a smaller piece of time than other sea level analyses that started, coincidentally, in 1930 at the beginning of a 40 year plateau in planetary warming. This choice of time frames, beginning at the beginning of this temporary temperature plateau, allowed sea rise acceleration to be masked.

The warming plateau was caused by massive industrialization during World War II. Air pollution cooled the planet and not until significant air pollution laws were passed in the 1970s did the air pollution begin to decline. This meant of course that the warming mask was lifted and the warming trend continued.

Houston and Dean’s use of trend fitting technique was also inappropriate. They used a method that tried to fit a straight line onto the tide gauge data that is, as the climate scientists say “noisy.” This data is inherently chaotic. Fitting a straight line trend to a chaotic data set is inherently troublesome.

The two Army Corp engineers also focus on projecting the 20th century trend into the 21st century. This is an intuitive error, and this is my own observation. As our climate warms more and more, there is more energy to melt more ice. This means more sea level rise. Evaluating 20th century data, when warming was less, and projecting that trend into the future, when warming is more, is an error in logic.

Also remember that we are only talking about tide gauge data. There are a number of recent papers that say that sea level is significantly accelerating based on gravitational measurements of ice lost from ice sheets. Since just after the run of the century a new satellite system called GRACE has been showing rapidly accelerating polar ice loss. This latest generation of gravity measuring satellites is 100 times more accurate than the previous technology. 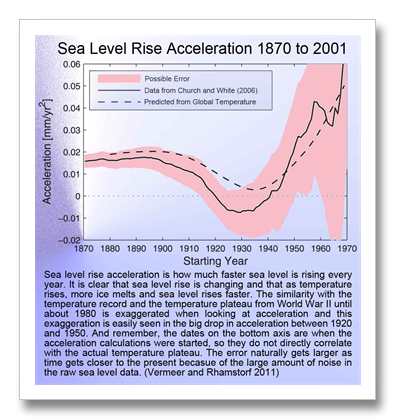 Very few evaluations of the new GRACE data disagree with the consensus position and when they do, the disagreement is relatively small. For example, the vast majority of the findings show the West Antarctic ice sheet to be rapidly losing ice. The single dissenting view that I can speak to, says the loss is only half as large as the rest. Considering that as recently as the 2001 IPCC report, Antarctica was not supposed to be losing ice at all until 2100 (or later), makes the current losses, that  are 90 or more years ahead of schedule, significant to say the least.

The latest in sea level rise evaluation is an analysis done by Vermeer and Rahmstorf in their rebuttal to Houston and Deans attempted destruction of Vermeer and Rhamstorfs fundamentally significant sea level rise temperature evaluation in 2009. It is clear that sea level is rising and that as temperature rises, more ice melts and sea level rises faster. The similarity with the temperature record and the temperature plateau from World War II until about 1980 is exaggerated when looking at acceleration and this exaggeration is easily seen in the big drop in acceleration between 1920 and 1950 in the graph titled Sea Level Rise Acceleration 1870 to 2001. And remember, the dates on the bottom axis are when the acceleration calculations were started, so they do not directly correlate with the actual temperature plateau. The error in this graph is shown in pink. Because of the statistical analysis, the error naturally gets larger as time gets closer to the present because of the large amount of noise in the raw sea level data. (Vermeer and Rhamstorf 2011)

Cazenova and Llovel (2009) say: “If, as is most likely, recent thermal expansion pause is temporary, and if land ice shrinking continues to accelerate, the prevailing sea level may be the source of some surprise in the near future.” 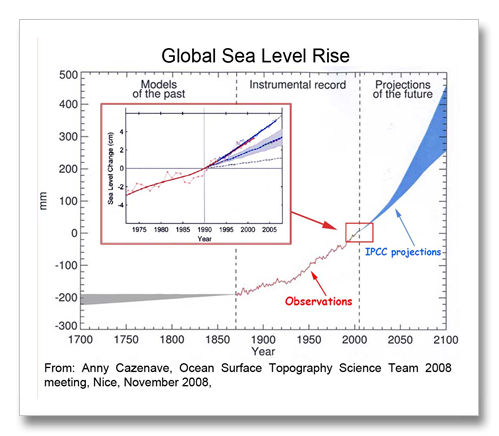 Temperature and Sea Level Rise: This relationship is just about as solid as a physical relationship gets. It warms a little, ice melts a little, it warms a lot, ice melts a lot. What is not observed here however is what the ice scientists call dynamical ice sheet disintegration.  it has been happening off and on in Antarctica for nearly twenty year and it has happened a few times in the Arctic too.

To question standard physics is absurd, Dean and Houston have track records of deniers. They assertion that sea level rise is not accelerating is also absurd, unless of course you would one of these folks who does not believe in Earth’s temperature change evaluation.

There are those out there that make these assertions. I try and spend little time giving them credence by discussing their misguided beliefs. There is a very small amount of science that supports these misguided beliefs, but it is even smaller than these climate science deniers would have us believe. There is always a small amount of science that supports these skeptical beliefs, but scientifically moral and ethically appropriate professionals discount this small amount of information until it gains enough credibility toll show validity.

For over twenty years, this validity has not been forthcoming. The skeptical findings continue to perform their rightful role in fine tuning the main body of scientific work, but little has changed in the general direction of climate science. Carbon dioxide concentrations are increasing faster. The CO2 responsible can easily be shown to be fossil carbon, coming from fossil fuels. Earth’s temperature is increasing, it is not decreasing, or even stable. The temperature graph may seem like temperatures have plateaued, but this is a short term phenomena not relative to climate timeframes, but to yearly weather trend chaos. The year 2011 was the warmest year ever recorded, warmer than 2005, then 1998 before that. 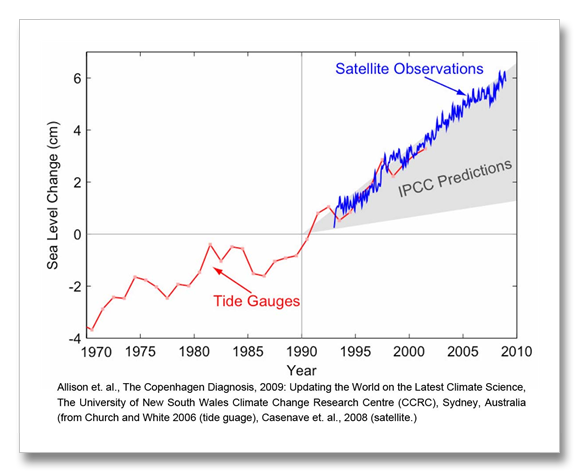 Our climate is moving along the worst-case scenario, just like sea level rise (Allison 2009.) Impacts to global ecosystems are occurring, they are largely unprecedented and they are occurring faster than they were supposed to. Climate Discovery Chronicles brings this all to you when our media, owned by the great Republican business community, continually clouds our understanding of the facts with propaganda.

Houston and Dean, Sea level acceleration based on U.S. tide gauges and extensions of previous global-gauge analyses, Journal of Climate Research, May 2011.