Snowtober: The First Snowtastrophe of the Year – Possibly Bigger than Hurricane Irene

Widespread one foot totals, even more widespread 2 foot totals, with peaks up to 32 inches fell in Jaffrey, New Hampshire. Eleven dead, 3 million without power. Heavy wet snow with leaves still on the trees. NJ Conn and New York – states of Emergency. The storm blanketed states from Virginia to Maine and its only October smashing October snowfall records. More than 800,000 power customers were without electricity in Connecticut alone – shattering the record set just two months ago by Hurricane Irene. 20 October daily records were set from West Virginia through New York. 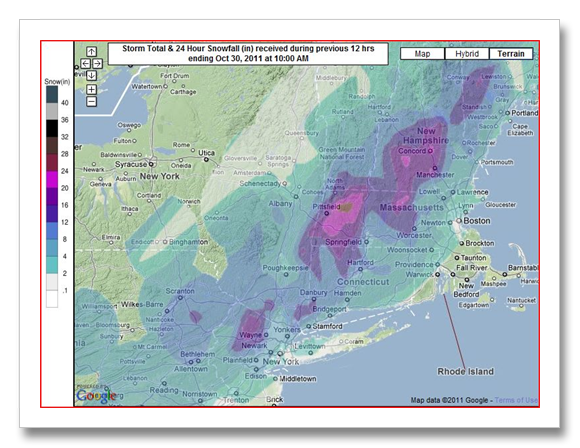 Trains were shut down in Connecticut, Vermont, Massachusetts and New York and New Jersey. States of emergency were declared in Massachusetts, Connecticut, New Jersey, and 13 counties in New York state. We are still seven weeks away from winter and authorities say it will be a week before all power is back on.