Somali, Ethiopia and Kenya – The Most Severe Food Shortage Security Emergency in the World Today

An article in Nature News, in the journal Nature, describes the prediction of this famine and it linked to climate change. Last summer, the Famine Early Warning System Network (FEWS NET) set up by the US Agency for International Development to help policy makers prevent humanitarian disasters, predicted this major and growing famine.

At risk right now are 12.4 million people; this is the worst drought in Africa in 60 years. One quarter of the Somalia population has been displaced. 1,500 refugees are fleeing Somalia to Kenya every day. Most of them go to Dadaab, a refugee camp built for 90,000 in 1991. Over 400 thousand refugees are in Dadaab right now. 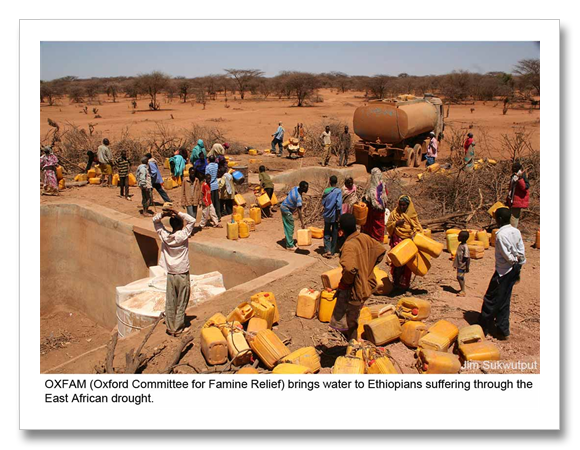 When the 2010/2011 La Nina was forecast the FEWS NET made their prediction of famine in east Africa due to extreme drought. Three factors added up to allow them to draw this conclusion.  First, La Nina’s are generally associated with drought in east Africa from October to December. Second, the weakened rains around the Horn of Africa in the late 2000s in combination with high food prices had, as the article says, “weakened the population’s resilience to food emergencies.” Third, research has shown that ongoing climate induced warming in the Indian Ocean is linked to drying of March-to-June rains in East Africa.

As anticipate, the fall rains failed nearly completely. then the spring and early summer rains failed. In 1984, a million people died in the great famine in Ethiopia and Sudan. Conditions are quickly worsening. The price of maize in Kenya has increased by 246 percent. the value of a goat, common used to barter for maize, has fallen by 50 percent. FEWS NET reported on June 7 “This is the most severe food security emergency in the world today, and the current humanitarian response is inadequate.” The article states “Famine conditions are expected to spread farther across Somalia, and large areas of Kenya and Ethiopia could see food availability fall to crisis levels. In all, some 11.5 million people across East Africa need emergency assistance.”

Natural Cycles?  Natural cycles that are increased in intensity by a growing population? Sure, this could be so. But, that was when we were playing by the old rules. The lessons of climate change are true all across the globe, not just in Africa. What were once just natural climate cycles, at the very least, are now enhanced by climate change. But more concerning, what we once could expect from natural cycles on our old, pre-climate change Earth, are in many cases no longer applicable.

The frequency of reoccurrence of these “storms and floods” and such has been based on real weather events, or evidence of such events and statistical analysis evaluating their reoccurrence. This reoccurrence of course would be 100 years for a 100-years storm (always understanding that a 100-year storm occurs on average only every 100 years.) It may be obvious to you now that we really don’t yet have 100 years of really good weather observations, like we can get from modern weather stations and satellites, but our scientists are pretty clever people.

The can take the “high resolution” weather data that we do have and compare it to older and older weather observations and sort of “fill in the blanks.” Statistics work really well when one is working with a stable population. Predictions can be made with high accuracy. This is what I am referring to when I saw “old rules.”  We have had a remarkably stable climate for about 10,000 years, more so than at any time in the last 400 thousand years, and possibly more stable than anytime in the last three million years or more.

So now that our climate is changing more rapidly than anytime in the last 610 million years, we have proceeded beyond this stable climate state. In effect, we are playing by “new rules.” But the last 10,000 years hardly matters. It is the last 250 years, or even the last 100 or 50 years that matters. Our civilization has evolved with an extremely stable sea level and relatively moist areas across the interior of most of our large continents where we grow much of the food that the world eats. Our coastal populations, which amount o nearly half of the world population depending on what one thinks of as “coastal”, evolved with stable populations of seafood and many areas or the globe are exceedingly dependent on snowmelt from winter mountain snows that serve as their only water source.

New climate rules make the challenge all the more urgent. We have a fair idea of what our climate was like at various times in the past, but that was when those climate were relatively stable. We also know what the IPCC says about regional climate change, but this information is based on climate science prior to 2005 when they stopped taking papers. Since then we have developed much high resolution regional climate models, but they too are mere representations of our future climate. The latest IPCC report suggested that East Africa would become wetter, and it still may, but more recent modeling backed up the actual weather trends show drying in east Africa.

We may have an idea of what will happen, but it’s only an idea. A more robust finding of climate science though is that our current weather patterns will intensify with wetter areas getting wetter and drier areas getting drier. Now, through in the natural cycles and amplify the enhancements to our weather promised by climate change. You see, it’s not really the few degrees of change that will disrupt our civilizations evolution. Even ten degrees of warming would not be so bad. (well maybe in Texas.) It is the amplification of weather extremes that will be our undoing.