Superstorm Sandy: Are We Being Taken for Fools?

One last time: We do not have to have statistical certainty to be certain that Sandy was caused by climate change. When climate scientists have been warning us for twenty years that superstorms like this would happen as our planet warms—and it  happens—how big of a fool do those deniers and delayers think we are? 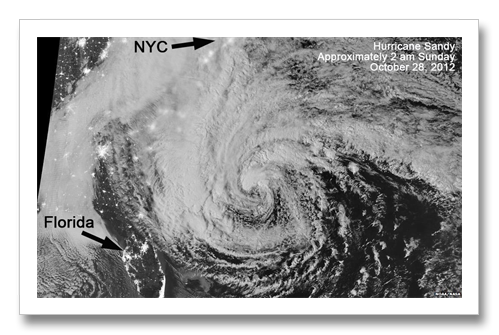 Against all odds, or the “New Normal”? It depends. If one asks a climate scientist, one gets an answer based on statistical certainty. This is where the thought “We can’t say for certain that any one weather event…” If one asks an engineer, and that engineer is not one in the discipline that does not “believe” in climate science, a different answer is forthcoming. Engineers are applied scientists. They take basic scientific knowledge and “apply” it to the real world.

We are not being taken for fools. Reporters are simply reporting what they have heard for two decades or more from some of the smartest people in the world studying climate. And the climate scientists who are telling us that we still can’t tell if any one weather event is caused by climate change?  The dendrochronoligists hardly know what the cryologists are thinking (tree ring scientists and ice scientists).

Reporters have their go-to guys for climate answers. This is why I do what I do. I don’t know the grueling details about tempestology (the study of storms from prehistoric evidence) but I do know about the myth that hurricanes are not increasing on a warmer planet. Greg Holland, a division director at the National Center for Atmospheric Research in Boulder, Colorado, said this at the American Meteorological Society’s 27th Conference on Hurricanes: “The hurricanes we are seeing are indeed a direct result of climate change and it’s no longer something we’ll see in the future, it’s happening now … The large bulk of the scientific community say what we are seeing now is linked directly to greenhouse gases.”

The debate between the deniers and the delayers about whether or not hurricanes are responding to climate change is is a myth. As there almost always is with myths, there is a grain of truth here. Globally, hurricanes are neither more powerful nor more numerous. But in the Atlantic Basin, they have validly become more numerous. There is still not enough data to statistically say if they are becoming more powerful or not—in the Atlantic Basin. The reason why the delayers and deniers can truthfully say nothing is happening is that the Pacific Basin (and the Indian Ocean too) is much larger and has many more tropical systems every year. In the Pacific Basin, nothing is happening and because numerically, the total population of tropical systems is dominated by Pacific storms, the statistics “globally” do not show any trend.

But because statistics do not tell us that hurricanes are becoming more powerful does not mean they are not—especially concerning storms like Ike, Irene and now Sandy. The deal with statistics is that there must be a lot of data points for validity to happen. Some things need only a few data points for the statistics to be certain, but these things are very regular things. They are not like hurricanes where no two are alike. It may be decades more before the statistics are settled. All the while the denialists and delaying-persons will be scolding the rest of us.

But what about all of those climate scientists who have been telling us for decades that hurricanes would get stronger–for certain—on a warmer planet because heat fuels hurricanes and warmer temperatures create stronger tropical events?  … Exactly!  When are we going to stop listening to “the voices”? We do not have to have statistical certainty to be certain. If we were lifelong smokers and we were all diagnosed with cancer all of the sudden, would we deny and delay one second? I mean for real—before we started getting treatment? Of course not! Why then, are we denying the diagnosis that has been forecast for the last 20 years?

Parts of the North Atlantic were five degrees warmer than normal when Sandy cruised up the East Coast. Most hurricanes diminish in intensity as they move northward in the Atlantic because the farther north ones goes in the Atlantic, the cooler that water gets meaning there is less warm water to fuel hurricanes. The warmer than usual waters in the Atlantic meant that this weakening did not occur. Sandy did not weaken as it moved north, it strengthened.

The highest surge in New York City of 13.88 feet smashed the previous record of 11.2 set in the 1821 hurricane. If Superstorm Sandy was a country, the area it covered would make it the 20th largest in the world — roughly twice the size of Texas.

The pressure fell to 940 mb as Sandy broke the record set in the Great Long Island Express Hurricane of 1938. Except the 1938 hurricane was a CAT 3 storm. Sandy was Cat 1.  Waves of 10 to 15 feet high were on top of the surge impacting parts of Manhattan 25 to 30 feet above sea level. There were 7.5 million businesses and households without electric power in 15 states and the District of Columbia by late Tuesday morning after the storm struck.

Sandy was the worst hurricane ever recorded in New York City since it was founded in 1624. Her kinetic energy, the total amount of energy in the storm taking wind speed and multiplying it by area covered, was greater than that of hurricanes Katrina, Andrew and Wilma—all cat 5 storms.

Seven subway tunnels flooded to the roof. The Army Corp of Engineers had to help drain them. A 15 foot storm surge is normal for a Cat 4 hurricane. Sandy made landfall with 90 mph winds as a Cat 1 hurricane. Cat 4 hurricanes normally have winds of 131 to 155 mph.

New York’s costs so far are at $32.8 billion to restore damaged housing and infrastructures and to cover lost business activities. New Jersey’s governors office says the overall losses from Sandy is thought to be at least $29.4 billion and growing (November 23rd). All total, Sandy was responsible for 253 fatalities and an estimated $66 billion in damages.

On the day before Sandy was named, the European Models were telling us about the unprecedented track of Sandy—the left turn. Eight days before landfall we knew where Sandy was going to make landfall. This is not luck as many would think of weather forecasting this far out, especially with a hurricane. It’s modeling skill built over a half century. The model’s track projections are getting surprisingly accurate. It’s the intensity projections that still give the forecasters grief.

The predicted storm surge was doubled over the forecast surge. The final size of this storm was mind boggling extending from northern Florida into Canada. The largest hurricane ever recorded in the Atlantic basin was Carla in 1961. It filled the Gulf of Mexico at about 800 miles across. Hurricane force winds extended 300 miles and tropical storm force winds extended across an amazing 500 miles. Superstorm Sandy however, had tropical storm force winds that extended across 1,000 miles.

The blocking high over Greenland: this is the seventh year in row for this pattern to set up and if you did not read my post Insandity on November 1, you need to check it out!