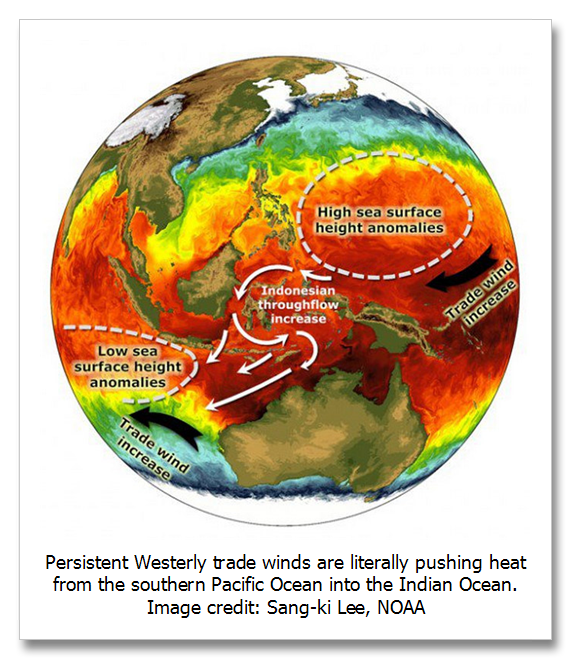 Once again we ask “why has the apparent global temperature lagged behind accelerating CO2 emissions”? The reasons are numerous and logical, yet the media and prominent climate change deniers continue to ignore their significance, if they even understand they exist at all.

Cherry picking the beginning point of the so-called hiatus by starting it during the warmest El Nino ever recorded in 1998 has wrongly given impetus to those seeking to disclaim that our planet is not warming. regardless of the fact that we have set five all-time global temperature records since 1998. The cool phase of the Pacific Decadel Oscillation has hidden some of the warming it as this decades-long ocean current system in the North Pacific has been exposing very cold deep waters to the surface since about 2000. Some blame was placed on the 22 year sunspot cycle which was the coolest in generations. Persistent La Nina cooling since about 2000 in the equatorial and southern Pacific Ocean is showing that ocean warming there is now proceeding at depths uncharted and “hiding” additional warmth from our atmosphere. Arctic temperature evaluation has shown that much of the missing warmth is there, only the temperature evaluations either underestimate the amount of warming or because of the scarcity of weather stations—entirely disregard the Arctic in their calculations.

This work reveals that the Indian Ocean too, is burying heat much more abruptly in the 2003 to 2012 period: “Indian Ocean heat content has increased abruptly, which accounts for more than 70% of the global ocean heat gain in the upper 700 m during the past decade. We conclude that the Indian Ocean has become increasingly important in modulating global climate variability.”

The authors say the heat is basically “leaking” in to the Indian Ocean from the South Pacific through the Indonesisan Archipeligo. Persistent westerly trade winds are pushing it there.