This installment discusses challenges with our ability to collect valid ocean warming data and how these challenges have systematically underestimated the role that our oceans have played in keeping our atmosphere cooler than the models say it should be. 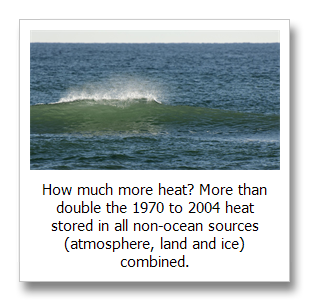 One thing that the climate deniers get right, maybe the only thing, is that we still have a lot to learn. What they get wrong though, is that what we do know is very valuable and worthy of deep contemplation. What the denier mentality absolutely does not get, is that the science we do know is very good and if anything the errors—or the yet to be learned knowledge—almost always errs on the conservative (small “c”) side.

That is, climate science underestimates. The reason it underestimates is that scientists are reticent to go out on a limb whether they are climate scientists or rocket scientists or any pother kind. Their livelihood depends on their continued ability to publish scientific papers. If they are wrong in their publications, the journals will think twice about publishing them again. The old saying in academia “publish or perish,” is real.

The “temperature pause” is one of the biggest myths carried on by the climate change counter movement and echoed very widely in the media. It’s true, or almost true, but the big picture is far from even being remotely similar as the previous five iterations of this series of reports shows.

Warming pollutants in our atmosphere continue to skyrocket, yet cooling forces abound. Some of them are manmade, some are “natural,” and some are challenges in our Earth data collection systems.

This paper was published in Nature Climate Change and describes the research from Lawrence
Livermore National Laboratory, and  the Jet Propulsion Laboratory at the California Institute of Technology.

The reason they compared the measurements to GRACE is of course that warmer ocean water expands. We know the volume of our oceans pretty well now so we can estimate heat content from water surface elevation fairly robustly. the GRACE system btw, is 100 times more sensitive than the previous gravimetric satellite system.

What they found was that for areas with fewer buoys in the Southern Ocean (Pacific, Indian and Antarctic), upper ocean heat content (upper 2300 feet)  was significantly underestimated. When the southern oceans were adjusted, significantly more of the missing heat that we have been looking for was found. This is of course the heat missing from the climate models and is what “the pause” discussion is all about. At least it is what the pause discussion in climate science is all about. In the few small but very vocal and very wealthy denierspheres remaining, the discussion is about discrediting all of climate science of course.

But this is not how scientists behave. They identify shortcomings (models) and look for reasons “why” the models, or any other research, does not conform with other pieces of research, or observations, or anecdotal beliefs.

The authors here use words to convey the meaning of their findings:

How much heat? More than double the 1970 to 2004 heat stored in all non-ocean sources (atmosphere, land and ice) combined.

The conclusions in context:

“Our analysis finds that modeled hemispheric ratios of SSH changes are
consistent with highly accurate altimetry observations but remarkably inconsistent with in‐situ
based hemispheric ratios of OHC changes. Adjusting the poorly constrained SH OHC change
estimates to yield an improved consistency with models, produces a previously unaccounted
for increase in global upper‐OHC of 2.2‐7.1 x 1022 J above existing estimates for 1970 to 2004
(Figure 5, upper inset). For perspective, these adjustments represent more than double the
1970‐2004 heat storage change for all non‐ocean (terrestrial, cryospheric and atmospheric)
heat reservoirs combined (Rhein et al., 2013), and highlights the importance of accurately
estimating ocean temperature changes. By contrasting hemispheric changes in an attempt to
quantify the impact of SH observation deficiencies, our analysis should motivate further work to
improve estimates of global OHC change.”