The Berkeley Earth Project: Turning Point or Business As Usual? Mueller and the Koch Brothers

Professor Rich Mueller’s The Current Status of Climate Change – A Non-Partisan Analysis, has done what hundreds of others have in the last several decades — confirmed the facts of climate science. Will it make a difference? Personally, I don’t believe so. The greed and selfishness portrayed by those who have created the propaganda is not something that can be fixed by a mere couple of hundred global scientific assessments.  The authority figures are hooked — they are addicted to money. This addiction is as strong or stronger than heroine, tobacco and alcohol combined. The followers of the anti-science campaign? Ever heard of the Reverend Jim Jones in Guyana?  Deceit of this kind happens. It happens to good people, lots of them. Deceivers first deceive themselves. The reverend Jones took over 900 innocent souls with him to the ever after, based on his word that Nirvana awaited. Am I comparing the non climate science propagandists to the Reverend Jim Jones? Damn straight I am. 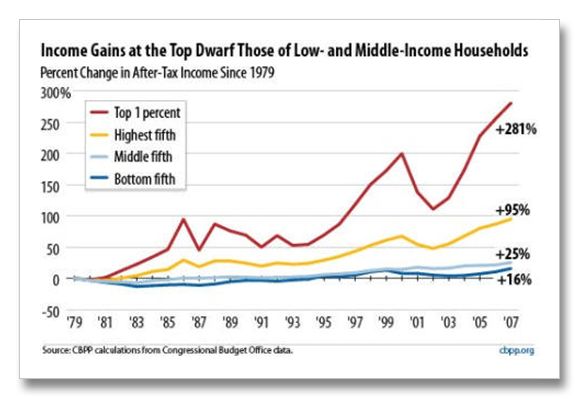 The misinformation that has been distributed, by what is basically the elite of conservative politics, is nothing new. People have been protesting the improprieties of the moneyed elite for centuries. In the last few decades however, and especially since about the turn of the century, the means  that these authority figures have used to perpetuate their propaganda have grown ever more inappropriate. And I am not just talking about climate change.

Occupy Wall Street is society’s backlash, at least against the moneyed elite’s excesses of this generation. But the same disease, or dysfunction, or addiction, or what ever it is that motivates these people’s greed, is at work all across America.

Now look, this is not about making a profit. What Wall Street has done, what the pharmaceutical industry has done, the insurance industry, the energy industry . . . what is going on here is far more than mere profits. If my small business made the profits that these industries make, I could support the entire town that I grew up in. The greed is out of control. Their supposition that near truths are ethical is now valid.

The Top 1% income graph sort-of looks like the hockey stick doesn’t it.  How did this happen? Why did the top 1 percent’s income grow ten times more than mine? Looking back to the roaring 1920s, why were rich people’s incomes so much of the total back then – surprisingly similar to today?  Could it have something to do with the Great Depression and the banking rules our government created to keep us from ever having another massive stock market crash resulting in a decade long economic depression with nearly 30 percent unemployment?  You bet it did.

Conservatives say that millionaires need tax cuts to create jobs when the top 500 businesses in America are paying less than 15 percent taxes on average. Tell me how, during Clinton’s administration, when the top income bracket was 39%, we created ten times more jobs than George “Dubya” did with his tax cuts? Tell me how, during the first three quarters of this year, that energy made 54 billion and

Despite $160 billion in profits, these 280 companies received $223 billion in tax subsidies. Thirty of the companies enjoyed a negative tax burden of over the three year study period while at the same time earning $160 billion in profits. Finally, another of the big lies of the right has to do with the competitiveness of US Companies compared to international companies because “U.S. tax rates are higher than the rest of the world’s.”  The study finds this is just a myth. Two-thirds of the study group who had profits overseas and in the U.S. paid more taxes overseas than they did in the U.S.

Taxes, the banking mess, financial bailouts and conservative politics. They tell us they can not go on unless they have less taxes yet they had much higher taxes and created ten times more jobs under the Clinton administration.  Their tax/money issues smell very much like their line on climate change.  What is coming out of their mouths in both situations seems to be pretty much opposite from reality.

The following is a list of just a few of the Fortune 500 Companies with negative tax rates – that’s right, Uncle Sam paid these folks, they did not pay Uncle Sam taxes: Wells Fargo ($17.9B for billion), GE ($8.3B), IBM ($$8.2B), Goldman Sachs ($3.1B), Verizon ($12.3B), Boeing ($3.5B), Exxon ($4.1B), Coca-Coal ($2.4B), DuPont, Corning, Honeywell, El Paso Natural Gas, Baxter International, Conway, Ryder, Pepco, PG&E, Central Point Energy, Atmos Energy, American Electric Power, Wisconsin energy, Duke Energy, Consolidated Edison, Xcel Energy, CMS Energy — you should read the report, there is much more there.

The fraud has been widespread since Al Gore was elected by the Supreme Court. The outcome of the Berkeley Earth Project, partly funded by the Koch Brothers?  Business as usual.  The report is now supposedly flawed.

The climate science antagonists are performing amazingly similarly to the bankers and financiers and insurance people. Their latest, led buy Anthony Watts at Watts up with that, tries to demonize  a couple of long standing climate scientists (Trenberth, Abraham and Gleick) who have finally started questioning why Roy Spencer continues to practices climate science. Watts continues to uphold Spencer’s allegations — this time about satellite temperature observations.  This paper was published in the academic Journal Remote Sensing, and it was so bad, that the Chief Editor of the journal has now resigned directly because this paper is so bad that he should have never published it.  Still, just like Big Business as Usual, the climate unscientist supporters bravely slog through their own pits of deceit.