This one is stranger than strange. scientists have long been puzzled by what looked like fungal bodies that seem to cover many fossils of different kinds from what is called the end-Permian. This “end-Permian” is how the end of the Permian Epoch is described. It’s also called Permian Triassic Extinction 251 million years ago when 96 percent of ocean life forms and 70 percent of land life forms went extinct. This extinction event has been called “The Mother of All Extinction Events.” 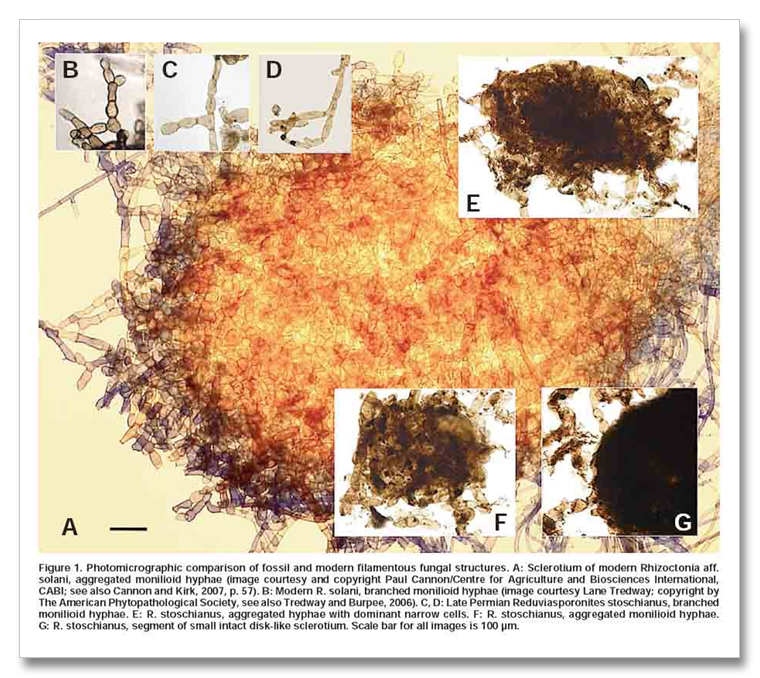 These fungi, or “filamentous organic-walled microfossils” were apparently very widespread. They seem to be closely related to current day soil fungal organisms called mycroesia and they were so widespread that the authors suspect that they may have had an influence on the extinction event.

They compare these ancient fungi fossils to modern fungi of the Rhizoctonia complex that  that can thrive in both dead and living plant materials. The authors say that “their virulence is normally held in check by the immune system of healthy host organisms, but can accelerate when plants are physiologically weakened, causing root, stem, and foliar diseases of many herbaceous and woody plant species.”

Modern Rhizoctonia are widespread opportunistic plant pathogens. They were discovered in 1815 by the French and their name means “root killer.” Cotton root rot, for those of you who know, is a modern form that wreaks havoc on stressed trees and other plants in our lawns and home landscapes as well as agriculturally around the world.

Massive soil erosion at the end-Permian was supposedly caused by widespread loss of deeply rooted plants. This loss of deep rooted plants was the great forest die-of that played a pivotal role ;”in the great extinction. The paper says; “Considering a pathogenic potential for the soil fungi, proliferation of [these fungi] would be in harmony with patterns of present-day forest mortality. Forest decline must be understood as a complex cascade of causes and effects that may lead to a strongly increased susceptibility of trees to fungal disease.”The authors continue “Initially, trees can become predisposed to mortality when they are weakened by periodic or chronic environmental stress factors such as drought, excessive temperatures, insect infestation, acidifying and toxic air and soil pollutants, and ionizing and ultraviolet radiation. Increasing propensity to disease then triggers lethal attacks by pests and opportunistic pathogens that successfully invade and colonize stress-weakened trees.”

At the end-Permian, the massive Siberian Traps volcanic flows were believed to be the major cause of climate change. This came from extensive CO2 emissions from traps. But other theories tell us that clathrates released large quantities of methane at about this same time — another outcome of abrupt warming. Ozone destruction could have occurred as well the resulting ultra violet radiation could have had impacts on shallow rooted trees.

The frightening reality of course is that today we are changing our climate significantly faster than any time in the past since there were green plants on land beginning 500 some-odd million years ago. the authors recognize this and draw parallels between ongoing forest die-off today and the greatest extinction event known on Earth at the end-Permian extinction event of 241 million years ago. the paper says: “By analogy with present-day forest decline, these findings suggest that fungal virulence may have been a significant contributing factor to widespread devastation of arboreal vegetation at the close of the Permian Period.”

Abstract: Throughout the world, latest Permian records of organic-walled microfossils are characterized by the common presence of remains of filamentous organisms, usually referred to the palynomorph genus Reduviasporonites. Although generally regarded as indicators of global ecological crisis, fundamental controversy still exists over the biological and ecological identity of the remains. Both fungal and algal affinities have been proposed. We seek to resolve this enigma by demonstrating close morphological similarity of the microfossils to resting structures (monilioid hyphae, sclerotia) of Rhizoctonia, a modern complex of soil-borne filamentous fungi that includes ubiquitous plant pathogens. By analogy with present-day forest decline, these findings suggest that fungal virulence may have been a significant contributing factor to widespread devastation of arboreal vegetation at the close of the Permian Period.