The End of the Arctic As We Know It

A study from the Academy of Sciences of Germany, Alfred Wegner Institute of Polar and Marine Research and the University of Colorado, Boulder has quotes “We find that early 21st century temperatures of Atlantic Water entering the Arctic Ocean are unprecedented over the past 2,000 years and are presumably linked to the Arctic amplification of global warming.” 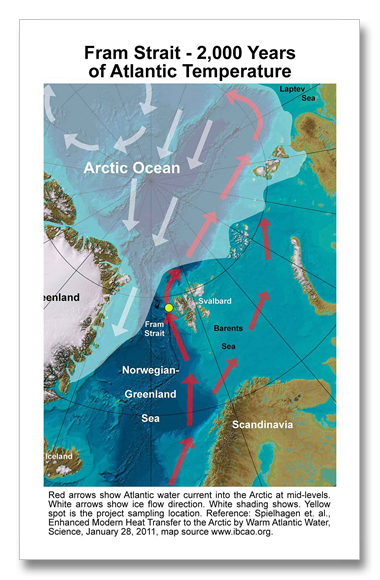 There has been a definite shift of currents in the Fram Strait. This is not likely just a temporary shift where meandering ocean currents move back and forth in an aimlessly random pattern. This shift has appeared to happen once in 2,000 years, sometime in the last decade.  The date can not be pinned down any closer than a couple of decades because of what is called bio-perturbation.

Any kind of perturbation is not likely to be a good thing, and bio-perturbation is not a good thing for “seeing” high resolution in an ocean sediment core. Worms are the cause of this perturbation. They move through the top most accumulating ocean sediments eating up the organic material and mix the sediments as they go. This action only messes up the sediments a little bit so that annual layering is generally missing. The signal that lies in longer time frames is still intact though so science can unlock the history of the area for all to see.

Speilhagen and his team looked at tiny plankton shells of a class of plankton called foraminifera (forams.)  Prior to 1900, 10 to 40% of all planktonic forams belong to subpolar species. Subpolar species are exclusively those plankton that are not of a "polar "origin. In other words, on 10 to 40 percent of the water, where the plankton grew, that were deposited as sediment at this research teams coring site. The scientists can tell this because the plankton absorb a particular type of nitrogen that can be traced back to it’s point of origin. Sub polar waters have a different kind of nitrogen than does polar waters.

The telling results from this research come from the last 100 years of sediment. When the researchers finished their chemical analysis it was clear that something had changed.  The last 100 years however show a drastic change in the origin of the plankton. Sixty-six percent of these plankton now come from sub polar waters. The authors say  that this change represents an "… unprecedented inversion subpolar foraminifer … in samples from the Modern Period indicate a strongly increased influence of warm Atlantic waters [coming] from the Norwegian Sea." 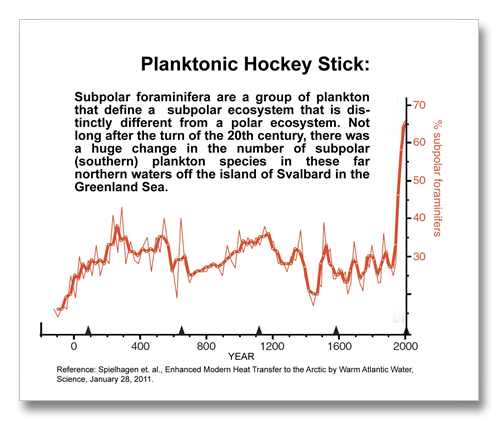