The good news is that we know it is going to be much worse than previously predicted: MIT Updates their climate projections – The bad news is that the media has now begun to completely ignore the environment

MIT projections are almost double the IPCCs. Very scary stuff, and this makes four major publications in as many weeks that the media has not  acknowledged. And it is great climate change art too. The "no policy scenario" is business as usual. The policy scenario is the middle scenario of several likely alternatives used by the IPCC in their analysis – only run through the MIT model. This New MIT model takes into consideration greater impacts from feedback mechanisms than the IPCC models understood. 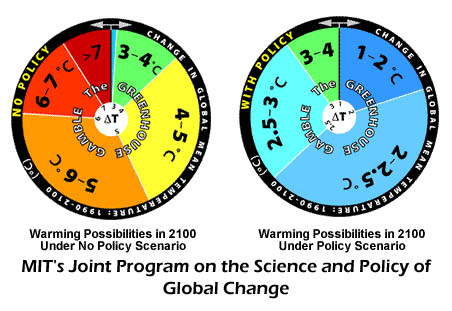 Greenland melts at a 2 to 3 degrees F. increase in average planet wide temp. Once the melting of Greenland was projected to take take thousands of years. Then came the late 1990s and scientists learned more and it was discovered that Greenland could melt in just a thousand years.  Today? Greenland has tripled its discharge in the last decade – that’s why the scientists are calling it the Big Melt. The estimates today? I have read hundreds of years.  There are the catastrophists that talk about giant melt water lakes under the ice that cause dynamical disintegration when significant chunks of the ice sheet slide into the sea as the massive under-ice lakes burst.

Pretty far out stuff until you have read about the Barbados coral reefs that show 16 feet of sea level rise in 100 years. The rises seem to coincide with Hienrich events where great iceberg armadas scattered sand and gravel across the North Atlantic when the Laurentide Ice sheet across North America experienced periodic disintegration events, the cause of which are still unknown. The thickness of the sand and gravel layers from these Heinrich Events range from several centimeters in the Eastern Atlantic two feet close to Canada and New England. And again the scariness factor increases when one realizes that 100 years is the smallest time slice observable in the Barbados coral study.

Oh and what was the other crazy stupid thing that I needed to say. Oh yes -Antarctica. Just 4 years ago Antarctica was thought of, universally among scientists across the world, as a place where the ice was stable; where there may have even been a bit of an increase in the mass of ice over time. Antarctica was then thought to be a place where global warming had not yet reached.

The along came GRACE – new gravimetric satellites 100 times more powerful than their predecessors. They were launched in 2003, and by 2006 they were able to tell our scientist that Antarctica was not only losing ice, but it had been doing so for a decade.  HUH?  They were able to better calibrate the data from the other satellites and found that Antarctica was now (2006) losing as much ice (through melt and iceberg discharge) as Greenland, and that this ice loss had actually started a decade before.

So the more responsible estimates of sea level rise are now looking at two meters plus in the next 100 years – excluding dynamical ice sheet disintegration. And now we have global temperature estimates of a median scenario at over 9.2 degrees F.

Does the reader realize that the average global temperature difference between the depths of an ice age and the warmest the temperature has ever been on a planet configuration that matters is 9 degrees?  Or that the director of the NASA Goddard Institute for Space Studies – the US Governments foremost climate modeling agency and likely the worlds foremost climate modeling agency, says our planet would likely peel off into a Venus Syndrome with a temperature change of 20 to 40 degrees? And MIT is using an average scenario warming outcome?

We have to keep telling ourselves – it is good that we know these things. Otherwise, the 30-year climate lag would eat us alive.