The Consequences of Three Feet of Sea Level Rise 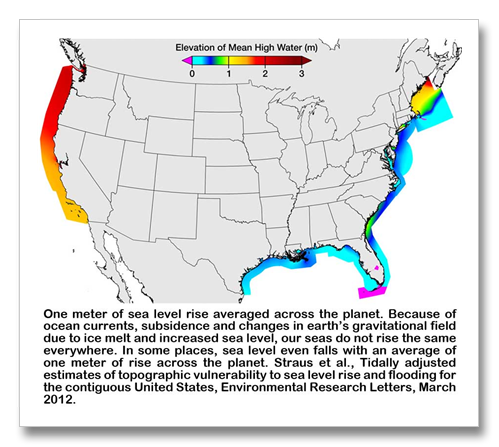 Pick an amount of sea level increase, any old amount will do. The minimum is the IPCC estimate of about 15 inches (a half meter). This of course does not include any increase in discharge from Greenland and Antarctica above turn of the century levels. It also does not include ocean warming above the middle of the road A1B scenario. Because we are on a much warmer track, ocean expansion will be a lot more, totaling more than 15 inches alone. Current sea level rise estimates this century range from just under a meter to nearly two meters. This amount of rise does not include significant rise from what the ice scientists call “dynamical ice sheet disintegration.”

What this crazy dynamical ice sheet disintegration term means is that sometimes, ice sheets collapse. The ice scientists know it has happened before. They know that it happened last when Earth’s temperature was about what it is now, and they know that sea level jumped ten feet in ten years or less. But the one to two meter sea level rise scenario simply comes from increased melt and increased iceberg discharge.

Without this “dynamical ice sheet disintegration,” the loss of property alone will be immense. A total of 2150 towns in the U.S. have at least one person living below one meter in elevation. If sea level rises just three feet, 1.5 million housing units will be flooded and 3.7 million people displaced.

The image showing the rise though varies greatly in the amount from place to place. The study looked at 1 meter of sea level rise on average across the U.S.

Our seas do not rise the same everywhere because of ocean currents, land subsidence, crustal rebound and changes in Earth’s gravitational field. What you say? As an example, the Pacific Ocean is up to several feet higher than the Atlantic Ocean on average. Ocean currents play a tremendous role in controlling sea level, this is a fairly easy thing to visualize. Point an ocean current at a shoreline and the water piles up. The stronger that current is, the more the water piles up. But gravity plays a role too. The higher the water piles up, the more gravity pulls it back down and the less influence increasing volume of water in the oceans has.

Land subsidence and crustal rebound play a role to. Many places across Earth are subsiding because of various things caused by man and not. Many places on earth are still changing from when the ice age ended. Masses of ice as large as ice sheets depress Earth’s surface hundreds of feet. When the Earth’s crust goes down in one place, it generally goes up in others. The little squeeze dolls with the pop-out eyes are a good example of this effect. Because the mantle is made of different material that behaves differently under stress, some areas pop-out more than others.

The great depression in Earth’s surface from the northern ice sheet is rebounding too. And it’s not just the land under where the ice sheet once was. For hundreds of miles away from the edge of the ice sheet the land was pushed down by the ice and is still rebounding after the melt.

Even more, all of that ice melting has mass. Mass creates gravity. More mass near the giant ice sheets that can pile up over two miles high creates more gravity in those areas. Gravity affects sea level. So as the ice melts, mass is shifted from the ice sheet and redistributed in much smaller amounts all around the globe as water. This means that the gravity from that mass of ice, once concentrated at the poles, is redistributed around the earth.

All of these things affect sea level rise. This is really quite an astounding body of work from the last several decades that has looked at how sea level changes. Now we have this current work by Strause and his team that has put all of these things together and modeled the outcome.