Transportation (On-road in the chart) produces more warming than coal, and in fact, all power generation combined. A study from Columbia University in the Proceedings of the National Academy of Science has been the first to look at the big picture. Burning fossil fuels, or clearing forest, landfills or agriculture – all create both positive and negative forcings.  The greenhouse gasses that warm the planet are considered positive forcing, 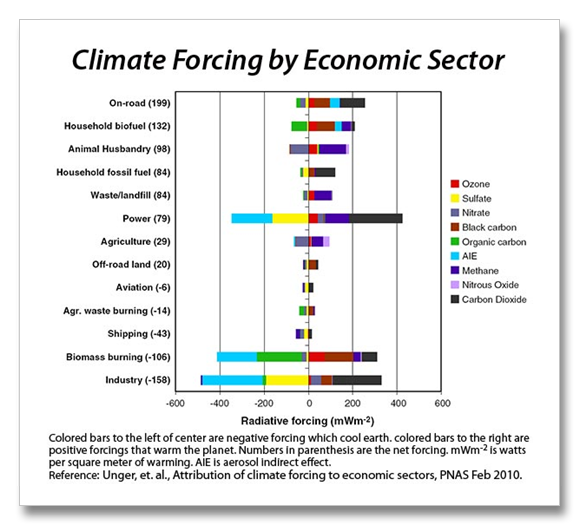 the aerosols emitted are considered a negative forcing and cool the planet. Up until now, nobody has done the math. Until now that is. A team led by Nadine Unger at the NASA Goddard Institute for Space Studies has done just that, and the amazing thing that they have discovered is that in the short term, transportation creates more warming than power generation, and in fact, more warming than any other economic sector.

It is also the short term that is so important to climate change (which is short in the words of the author – not so short in real life… I explain further below) The feedbacks are critical to the short term. We must control our climate before the feedbacks take over.  But how can transportation be responsible for more warming than power generation?

It all has to do with aerosols (sulfates are one form of aerosol). Aerosols are another emission that is associated with burning fuels.  These aerosols cool the atmosphere and are sometimes known as bright soot because they reflect the suns energy back into space before it can strike the earth and warm things up. In the power generation industry, coal creates an immense amount of aerosols, but the transportation industry emits very few aerosols. So the net warming, as shown in the chart to the right, is much greater for the transportation sector than sectors that generate aerosols.

The study was based on constant emissions at the same levees that were emitted in 2000.  The short term was modeled at the year 2020 and the long term at 2100.

In 2100 however, Power Generation has caught up and surpassed transportation. This is because of the long-lived lifetime of CO2, methane and nitrous oxide. Because of their long lives, they continue to build in the atmosphere. The aerosols only last for a few to several years. But it takes Power Generation decades and even generations to catch up. By 2100 the study shows that Power is responsible for only 33% more  warming than transportation. Transpiration is responsible for 152% more warming than power generation in the short term of the next 50 or 70 years.

Now for the uber crazy part – those airlines that are so damming for global warming? The net effect of the their total emissions in the short term is a negative forcing – they cool the planet… In the long term the total warming is only about 1% of the total warming from all anthropogenic sources.

I don’t make this stuff up folks… So, what does this mean? It means that we are simply barking up the wrong tree. We should be placing emphasis, by far, on the transportation sector, because remember, it’s the feedback effects that are the most important. Once they get rolling in earnest, they will likely be unstoppable and we will be committed to degrees more warming at the minimum. This is on top of the warming already projected.