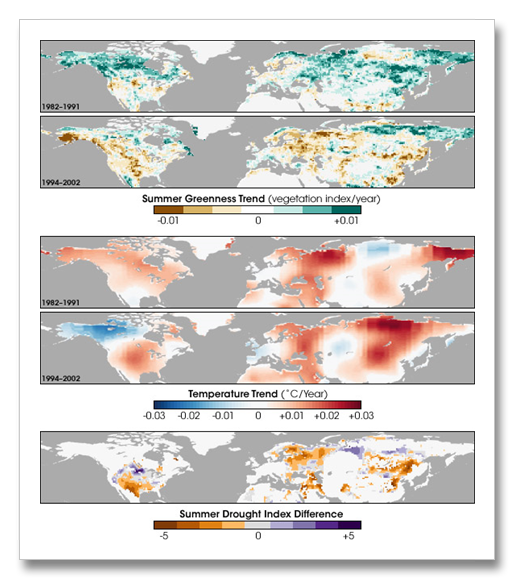 A study in Nature last month confirmed ongoing increased CO2 storage in tropical forests – on the gigaton scale – that’s a lot. So the CO2 fertilization effect is confirmed?  Yes of course, we new this all along, CO2 is a fertilizer. But in reality the benefits of the CO2 effect have already been surpassed in northern forests.  Another study in the Journal Science last month found that tree death from climate change had doubled in the western North America in the last decade from 1.5% to 3% per year. This might sound minimal, but because trees are relatively long lived, the researchers found that this increase in mortality would, within several decades, decrease the average tree size substantially, maybe by half or more. Tree size is what natural forest sequestration is all about. Bigger trees mean more storage – Thus the CO2 fertilization effect makes larger trees and sequesters more carbon.  But if warmer temperatures are increasing tree mortality enough to decrease tree size, things start to offset.

More importantly though is the math concerning a halving of tree diameter.  A two foot diameter tree has four times the amount of wood in it than does a one foot diameter tree. When a tree’s diameter is doubled, its volume increases four times, it doesn’t double, so when a trees diameter is halved, it only has 25% of the volume. Before long at all, diminishing CO2 storage in northern forests will outpace increased storage in tropical forests, unless fires increase in tropical forests, which they are projected to do, and unless tree death in northern forests increases further because of insect infestations which were not taken into account in the northern tree death study.  Both of these scenarios are likely and both decrease the efficiency of the worlds forest storage of carbon.

Forest browning, in the words of NASA Earth Observatory scientists, "faster than any scientists thought possible", is occurring today as a sign that the CO2 fertilization effect has been surpassed in our forests of the north.