The Antarctic ozone hole was caused by man-made emissions of “ozone depleting chemicals.”  When we realized that Earth was in grave danger because of the great threat to our ozone layer that these emissions presented, we the people of this planet agreed to do something about it. A treaty was formed called the Montreal Protocol. It was ratified in 1989. 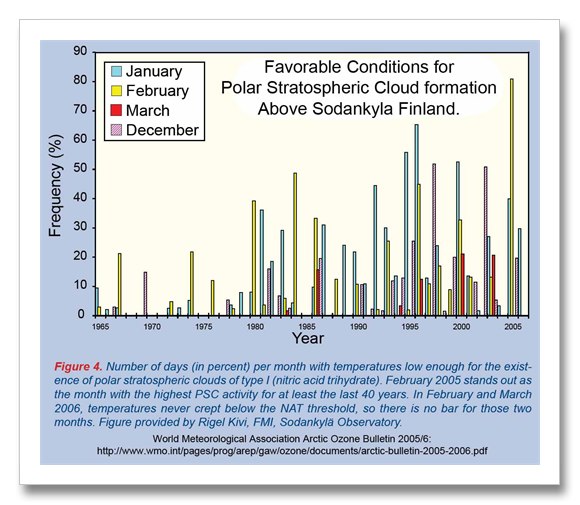 The media these days say that atmospheric scientists say that we have likely stabilized our ozone troubles and we can expect to see a slow improvements over the next couple of decades. But this is not really what the climate science tells us. Yes, we have stabilized emissions of ozone depleting chemicals, but the simple facts of climate science tell us that fewer ozone depleting chemicals will have greater impacts to the ozone layer as the planet continues to warm.

The ozone depleting chemical reaction happens at the coldest time of the year in the coldest place on the planet. The colder it is the stronger the reaction. The reason that it has only happened in Antarctica, or at least that the ozone depletion at the North Pole has always paled in comparison to the South Pole, is that it simply does not get as cold at the North Pole than it does in the South.

So if Earth is warming, why are we even worried about ozone depletion and why are we having an ozone hole form over the Arctic where it is not as cold as it the Antarctic?

The answer has to do with basic climate science. The way that greenhouse gases warm the planet is they trap heat. They trap heat in the troposphere, where most of the greenhouse gases can be found. The troposphere is the “active” layer of our atmosphere, or the layer where all of our weather can be found. The troposphere is that part of our sky below about 58,000 feet, or 35,000 to 40,000 feet at the poles.  You can actually see the bottom of the stratosphere sometimes when big thunderstorms form. The typical anvil head that forms on top of big storms is where the upward convection of the storm is stopped against the bottom of the stratosphere. The “ozone” layer then is way up there in the stratosphere. Because extra heat is being trapped in the troposphere, that heat does not make it up to the stratosphere and the stratosphere cools. This is normal climate science, it has been in the science discussion for decades and the models predict it famously.  So, hey Republicans, here is another way that global warming actually makes it colder!

There was some conflict about this process back around the turn of the century because it did not appear that the upper atmosphere was cooling.  We have discovered a few errors in our data since then — deteriorating satellite orbits mostly — and after correcting for these errors we now see that the stratosphere is indeed cooling, just like the models said they would. (The climate change denying community continues to march around the old papers claiming a conflict though. Science is not really a high point of theirs.)

So on a warming planet, as the stratosphere gets colder, conditions that favor ozone depletion will become more frequent. It’s this polar stratospheric cloud thing (PSC) that does the damage. PSCs actually contain a lot of nitric acid (yes, we have nitric acid clouds on Earth) and it is this acid that combines with ozone, and sunlight, to destroy the ozone. The ozone destruction process is a photochemical reaction. Pretty crazy stuff really, but it happens somewhere up there above 50,000 feet in the stratosphere, in a place that is cooling because of global warming.

This Arctic Ozone hole has happened before and its occurrence is getting more frequent. This is easy to see in the graph discussing PSCs above Sodankyla Finland.  As our planet has warmed, the number of days with favorable conditions (really cold) for PSC nitric acid clouds to form has been steadily getting greater. So, why haven’t we seen a similar thing happening at the South Pole? This is because the Arctic is warming much faster than the Antarctic. The Antarctic is warming, but slowly. The reason is that the Antarctic is surrounded by a cold ocean, with a circular current that cuts off warmer waters in the north from reaching anywhere near the continent. The Arctic is surrounded by land that readily adds heat to the environment. 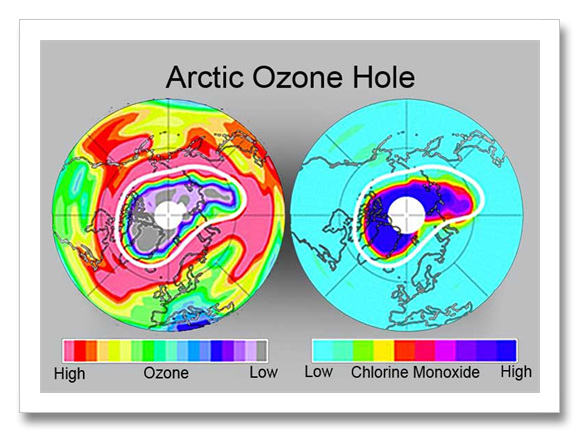 Journalists reports discuss this record Arctic ozone hole being caused by extremely low surface temperatures. But ozone depletion occurs in the stratosphere. These reports are likely just from confused reporters. What we have seen happening in the Antarctic is that the Antarctic Vortex has strengthened creating conditions in the wintertime that increase Antarctic sea ice with higher winds dismantling already formed sea ice and blowing it out to sea. This allows more sea ice to form and effectively creates a larger coverage area of thinner ice. It is likely that these same physical things are happening in the Arctic. The low surface temperatures are just a reflection of the low stratospheric temperatures.  But the rest of the weather reporting system is not reporting extreme cold, instead actual record warmth is what is happening. This fits well with standard climate science and cooling in the stratosphere, so I’ll go with confused reporters.

Another reason I will stick with “confused reporters” is that Arctic sea ice virtually tied the big 2007 record coverage, but 2011 saw a record low Arctic sea ice volume, as thick ice continues to melt faster than it is replaced.

Incidentally, the Antarctic ozone hole never really started shrinking after it grew so rapidly because of ozone depleting chemicals. This was not really what the atmospheric scientists expected.