The West Antarctic ice sheet is the single most remote and inhospitable region on the surface of Earth. Because of its remoteness and hostility, research there is scarce. On our rapidly warming world today, and considering the possible climate threshold we have just crossed, collapse of the WAIS is a very important thing to understand. Has it ever occurred before? How often and how fast? How much of the ice sheet collapses? How does it start? 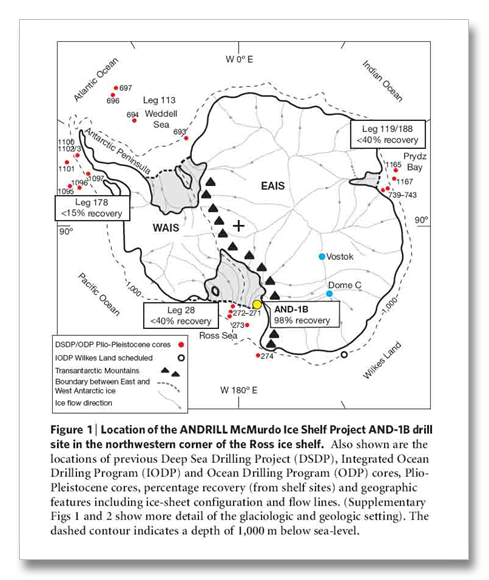 Two studies in Nature this week show the West Antarctic ice sheet collapses regularly on a 42,000 year schedule following the Earth’s tilt cycle (obliquity). Earth’s axis tilt changes from 22.1 to 24.5 degrees like a wobbling top, about every 42,000 years instead of in just seconds like a spinning top. The slight changes in this tilt change the amount of sun hitting each hemisphere on the planet. Because the northern hemisphere has more land, an increase (or decrease) in the tilt changes the Earth’s temperature slightly. This slight change in temperature is magnified by feedback mechanisms and creates much exaggerated temperature changes across the planet.

These natural "collapses" take 1,000 years to complete (averaging 3.3 feet per century), it is unknown if there are "events" during these "collapses" that are greater than the average 1,000 year trend of collapse of 3.3 feet per century (But they are quite likely says Bruce – our Earth more often than not responds in lurches and leaps rather than the traditional slow and steady glacial time frames we assumed when I was growing up).  These 1,000 year cycles are driven by "natural" climate change. (Also, 2.3 feet per century is enough to destroy our beaches and keep them from reforming – see here.)

Definitive findings in an ocean sediment core taken beneath the floating portion of the WAIS echo the recent modeling results for that specific point beneath the Ross Ice Shelf.

During the periods of WAIS collapse, average planetary temps were up to 3 degrees C warmer than today. Three degrees is the middle of the road climate projection of the IPCC supercomputer models.  But that ain’t gonna happen.

Our climate is on an atmospheric CO2 concentration trajectory that is worse than the worse case scenario and if anything, even the new projections are conservative. There have certainly not been any aggressive climate model projections in the last decade.

On the map below, AND-1B is the WAIS drilling project. The sediment core was taken near the edge of the WAIS beneath the Ross Ice Shelf where it is about 300 feet thick and through 3,000 feet of underlying ocean water.

Our planet today, our CO2 concentrations, are changing 20,000 times faster than anything in the last 65 million years (See here). These two projects show the effects of normal planetary warming on the WAIS. The resolution of the sediment cores is very rough. Analysis on time scales that matter to us is not possible. Sediment accumulation rates are very slow and biopurturbation, (great word) where aquatic worms and such stir up the top of the ocean sediments, prevents any finely tuned understanding of the more rapid collapse segments that may have occurred during the WAIS 1,000 year collapse events.