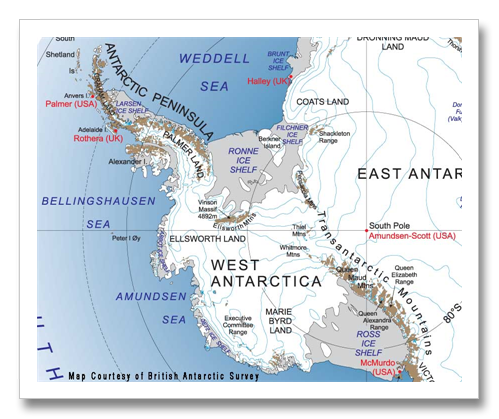 techniques, have found that West Antarctica’s ice loss has tripled since 1992. The measurements looked at glaciers discharging to a west central location of West Antarctica called the Amundsen Sea Embayment (see Amundsen Sea in the map on the right). This could possibly be the most critical area of the West Antarctic Ice Sheet (WAIS) because it drains the central parts of the WAIS and is bounded by only small buttressing ice shelves. The two very large ice shelves of West Antarctica are the Ross and the Ronne. They buttress, or hold back the flow of ice from the interior.

This is a great quote: “The total amount of loss [from the Amundsen Sea Embayment] averaged 83 gigatons per year (91.5 billion U.S. tons). By comparison, Mt. Everest weighs about 161 gigatons, meaning the Antarctic glaciers lost an amount of water weight equivalent to Mt. Everest every two years over the last 21 years.

A very important concept was presented by NASA’s press release:

The scientists noted that glacier and ice sheet behavior worldwide is by far the greatest uncertainty in predicting future sea level. “We have an excellent observing network now. It’s critical that we maintain this network to continue monitoring the changes,” Velicogna said, “because the changes are proceeding very fast.”